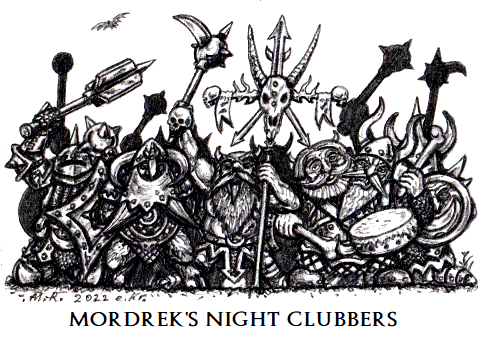 The Story of the Night Clubbers

The goat-legged Chaos Dwarf champion Mordrek Wightsbane had long been known for his demented antics. Nomads in the Chaos Wastes still speak of how he fifty years ago knocked the twain-headed Ogre Manrok unconscious, only to bind him fast to stakes driven into the ground, and have his men shovel eight anthills filled with furious Skinripper ants over the waking Ogre. Other fireside tales revolve around the crazed Chaos Dwarf's deadly take on puns.

One such saga revolves around Mordrek interrogating a Human captive while roasting him over coals. The tortured screams revealed that the Manling had been the owner of a den of ill repute in a northerly Empire town, which Mordrek's interpreter managed to translate to a 'night club' in the Chaos Dwarf tongue. Upon hearing this, a red gleam appeared in Mordrek's eyes, and ever since has he led his mirthful band of Chaos Dwarfs on nightly raids, all equipped with maces and clubs to make the pun work.

Armaments - Clubs, maces and morning stars, and other blunt weapons bedecked with spikes.

Dress - A chaotic assortment of armour, hides and strange garb.

Shields - A wild mix, often bearing a lying crescent as an emblem.

Leader - Mordrek Wightsbane, a Dwarf mutant gifted with goat legs and an insane intellect by the Dark Gods of Chaos.

Deeds - Bludgeoning the Giant Galk to death with sadistic relish after a Whirlwind pushed by a Boar Centaur had crushed its legs and laid the Giant flat on the ground. Smashing a wagonful of Halflings to a bloody pulp, only to then collect the remains, smear them out on a large plate and fry a large fleshy pancake out of them.

Reply
Return to “Other Game Systems”