Glory for the first man to die! Charge!
Reply 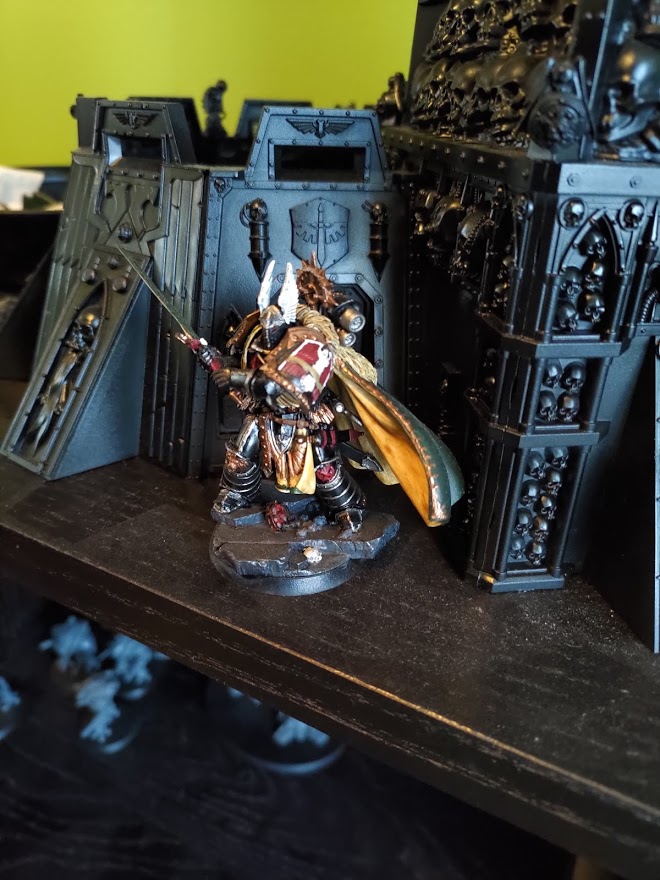 Name:
The 557th - The Mornauguth Dragons

Background:
The Great Crusade
Founded in the sub sector Known as Crowsnest Pass on the world of Maymont 5 mid way through the great crusade. Maymont 5 was a heavily forested world with a few large advanced cities. This sub sector was discovered by the Dark Angels primarch Lion El Johnson who remarked that Maymont 5 reminded him of his home Caliban for their large dark forests. They willingly joined the imperium reuniting with their homeworld Terra. They would recruit solely from the Crowsnest Pass sub sector to fill their minimum complement from 5 million strong. As their notary spread they built up a rivalry with a neighboring system Dasht-e Margo. Some of their most notable victories are listed below:
Destruction of the Orc war boss Bloodhacka WAAAGH
Bringing 5 systems to compliance
Extinction of the Xeons race once known as the Grav-voix
Near the end of the great Crusade they were attached to the Dark Angels fleet participating in legendary battles such as the Compliance of Sarosh.
M30 - Horus Heresy
After the compliance of Sarosh they traveled with the Dark Angels as they were impressed with their tenacity in battle, and their willingness to not ask questions. During the time when the Lion El’Johnson was hunting the night haunter the Dark Angels used The Mornauguth Dragonsas a supportive role holding and guarding key systems, and they took heavy losses by the night haunters. When the light of the Pharos was spotted the Dark Angels and The Mornauguth Dragonssplit up as the The Mornauguth Dragonsneeded to replenish their losses. Once they arrived back in the Crowsnest Pass they found it under siege by Dasht-e Margo fleet as they had declared for the warmaster. A bitter battle followed, ending in the rout of the Dasht-e Margo fleet. As the warp storms cleared, returning the light of the astronomican, they called on the Dark Angels for assistance. They remembered them and honored them by sending a single Promethean Class Cruiser (The Sequoiadendron Giganteum). Replenished and ready to take the fight from border skirmishes back to the Dasht-e Margo home world their fleet backed by the The Sequoiadendron Giganteum they launched an attack. The Battle was vicious with losses of most of the Sarosh fleet, but ultimately victorious with the burning of the entire Dasht-e Margo system. Returning home they found the Crowsnest Pass in flames, entire worlds lifeless. A message for aid was intercepted by the night lords, and while the fleet was gone they burned the sector as revenge including Maymount 5. Taking what was left of their proud Regiment and the surviving Sequoiadendron Giganteum they Set off for Caliban. It is believed they were lost to the warp and have never reached their destination.
M41
CLASSIFIED
INNER CIRCLE CLEARANCE RECOGNISED

13 Mar 21, 15:06
I like this starting point!
Just doing a bit of fact-checking as I write;
Compliance of Sarosh did include IA units and Orks are obviously fine. The 5 systems & Grav-voix are also perfectly fine, but some detail would be nice - the Expeditionary Fleet/s they were assigned to, perhaps.
A little more detail about their home world would be nice - tech level, societal structure, the effects the planet has on the populace etc, as well as where exactly it is. Maybe try to reference the areas of space in which the 1st Legion operated in order to find them and bring them to compliance.

Their inclusion in the Thramas campaign is potentially troubling however. I've not checked properly yet but I'm not aware of any mention of Imperial Army forces being involved. Additionally, resupply of troops would likely have come from Maymont 5 to the fleet, rather than the other way round.

I would maybe suggest taking a look at the Fleet of the 1st Legion at the time of the Crusade, and seeing if there are any vessels that are either known to have been lost to the Warp (without later re-emerging), or simply disappear from record without any known reason. You could then work backwards from here to write in a reason for their split and subsequent loss. Using the Night Lords/Thramas setting might end up being a little lore-breaking, as both the 1st and 8th were fully committed to that engagement.

If you could find an obscure ship that's simply not recorded after a certain point you could trace it back to its last engagement. Working out where and when that was you then know roughly when things go sour back home. Retaining compliance is of course a major priority, which would justify Legion action. The use of so senior a unit as the Cenobites however might require something a little heavier, but we could get to that later when we know where 'home' is.
slybobs7 liked this
Paying full price for your models, paints and tools? Don't!
Use our banners after the first post or at the bottom of the page for up to 25% off RRP!
Then bag yourself double reward points at checkout with coupon code PAU6006 - simple! =]

14 Mar 21, 16:25
So what I was thinking for the Thramas crusade was that they didn't actively fight with the dark angels, but I remember reading that it was a chase, hitting and destroying planets. So I was thinking and I could elaborate in my story, that they were installed as garrisons units to help hold star ports etc as the dark angels gave chase.

14 Mar 21, 18:03
So I've been doing some more reading on the Thramas Crusade - it would seem that my first source was a little lacking as there was plenty of IA involvement, so my apologies there!

It's undoubtedly lengthy, but have a fear here, see if there's anything that catches your eye!
It's also set in the Eastern Fringe, which is pretty much where you might consider having them re-emerge, as I mentioned in a previous post. =]
slybobs7 liked this
Paying full price for your models, paints and tools? Don't!
Use our banners after the first post or at the bottom of the page for up to 25% off RRP!
Then bag yourself double reward points at checkout with coupon code PAU6006 - simple! =]

15 Mar 21, 15:24
So I produced some ideas to flesh out some of the stories for there victories and the home world and have added some characters.

Destruction of the Orc war boss Bloodhacka WAAAGH.
Took 25 years to fully exterminate Bloodhackas brood. The battles took place over an asteroid field where the orcs had dug in using the large asteroids as bases while converting medium and small asteroids into ships flinging them all over the sector. The Alpha legion sent a small force to assist in the battle. Several orc armies were seen fleeing asteroids after the alpha legion were reported in the area the cause was never known why. They were recalled mid way through the campaign leaving the Mornauguth Dragons to finish the orcs. Cornus Officinalis led an attack on the largest asteroid where Bloodhacka was believed to be. The assault was repelled three times before they were able to land. The asteroid was a trap as it had been turned into a ship. Cornus Officinalis was able to destroy the engions of the asteroid allowing the asteroid to be cleared of orcs, but was injured in the attack on the engions. After many extravagant escapes Bloodhacka was cornered on a nearby moon where his asteroid crashed. The battle was fierce but he was killed by a lucky shot by The Astral Light volcano cannon. Completely destroyed the remaining orcs were easily moped up, thus ending Bloodhackas WAAAGH.

Extinction of the Xeons race once known as the Grav-voix
The Grav-voix were an aquatic race, raising massive underwater cities. Their culture was thousands of years old, but new to the stars. Only within the last thousand years they began pushing out of their solar system. The worlds they canonized were formar human worlds that were bombed by engineered ice comets completely flooding the worlds. First contact with the species was when comets headed to a newly complinet world were tracked back to one of their systems. Most planets were bombed until these oceans were evaporated enough allowing the ground attack to begin. An entire navy was commissioned and dropped onto the planets to combat the Grav-voix. The battles were bloody, as the Grav-voix used subsonic weapons that pulped flesh and would send catastrophic vibrations through ships and subs making them virtually fall apart. After 40 years of fighting the Grav-voix were extinct