While you're welcome to look around we recommend you register to get the full benefits of the site, allowing you to talk to our members, show off your work and take part in our events! =]
Ad blocker detected: Our website is made possible by displaying online advertisements to our visitors. Please consider supporting us by disabling your ad blocker on our website.
If you're reading this, please be aware that The Warp Storm is still being built! Feel free to register and say hi, but don't be surprised if things aren't perfect. I'm fixing things about as fast as I'm breaking them but the forums are definitely still functional! =]


Vindicator, 2 rhino/pred/razorbacks (all magnetised)
Dreadnought (classic, standard)
DA captain/librarian from megaforce
Unnumbered parts for standard marines, devastators (metal and plastic sets), DA upgrades, possibly assault, terminators
Metal DA bodies
Vanguard veterans (classic sculpts, presumed complete)
Masters of the chapter (metal, presumed complete)
Metal scouts
Plastic scouts are assumed, although I didn't notice them
Legion of the Damned (original metal, unsure of how complete it is these days)
Terminator Captain (minus sword, damaged years ago)
Chaplain on bike (yes I know they're not legal any more)
Sprues (not all complete) for various marine parts, some Chaos parts, Ork parts, Fantasy Chaos Warriors
Chaos sorceror
Chaos lord
Chaos terminators (metal, probably not complete)
At least one Ork Warboss (one may have been a Nob, not sure)
Ork burna boy/s (metal)
Various Cadians (mostly assembled) including metal Lieutenants/command squad and special weapons
Metal Catachans
Leman Russ/chimera (presumed complete)
Ancient stormtroopers -these guys, top right
Kasrkin squad
A sentinel or two (presumed complete)
Some custom resin female Cadians (from a crowdsourcing effort on TauOnline years ago)
Enough RTB01 parts to make a marine or two
Fellowship of the Ring set (presumed complete)
Some limited releases - 30th ann. Grombrindal; Aenur, Sword of Twilight
Old paint brushes
Old tools (now have an extra pin vice and drill bits, scalpel and blades, many more files and some sculpting implements)
Some greenstuff of questionable quality
Old paint (some modern colours in current/older pots, some out-of-production, some 90's era - who remembers pots of Smelly Primer?!)
More glue (revell polycement, humbrol liquid cement)
And then a load of loose bits (mostly marine).
An Ultramarine and a Fantasy Chaos Warrior my mum painted when I was about 9!
Maybe some other stuff?


Suffice it to say that box is full!!


I'm a little concerned though that I didn't find some of the really old bolters/backpacks, or more of the LotD stuff, but I may have just missed them when scooping up loose parts. There's also the possibility that there's a box hidden that I didn't find, and will see next time I'm there cleaning out old stuff. I'm hoping so anyway, because I binned quite a lot of loose stuff that was painted/glued/otherwise useless - mostly arms and weapons, but nothing that should be missed or would have been at all useful.


And yeah, lots of WD! I have a near complete collection between my first and last, only a couple have gone missing. Also have duplicates of loads for some reason. Haven't had a subscription in like a decade though, so no idea what it's like now!
Paying full price for your models, paints and tools? Don't!
Use our banners after the first post or at the bottom of the page for up to 25% off RRP!
Then bag yourself double reward points with code PAU6006 - simple!

Today in the hobby I intend to record two tutorials: one where I try my AMMO Oilbrushers on a spare Warhound Titan armor plate, and then another one where I strip that same piece of armor. If time allows, I will then start building my Arquitor Bombard!

28 Jun 2020, 19:25
Totally understand that! It's been raining yesterday and today, but prior to that it's been blistering!

How do you intend to strip the plate? Interested to know if you've found anything non-branded for resin that I can test for my stripping guide. =]

TITHI intended to start organising the box of goodies that I saved yesterday. What I've actually done is mostly lay on the sofa, as I seem to have damaged my back and I can barely move, which is fun!
Paying full price for your models, paints and tools? Don't!
Use our banners after the first post or at the bottom of the page for up to 25% off RRP!
Then bag yourself double reward points with code PAU6006 - simple!

Ah jeez I did the same thing the day after I picked up my old hobby box... curse of the past!?
Atleast you have an excuse for achieving nothing hobbywise

Ah jeez I did the same thing the day after I picked up my old hobby box... curse of the past!?
Atleast you have an excuse for achieving nothing hobbywise

I don't think it's related, but who knows?

It better be! I have a little organiser box thing being delivered tomorrow to act as a bits box (already know it'll be too small!

), have a tin that I want to move my paints to, and I'll be reorganising everything else in general. Need to be able to move!
Paying full price for your models, paints and tools? Don't!
Use our banners after the first post or at the bottom of the page for up to 25% off RRP!
Then bag yourself double reward points with code PAU6006 - simple! 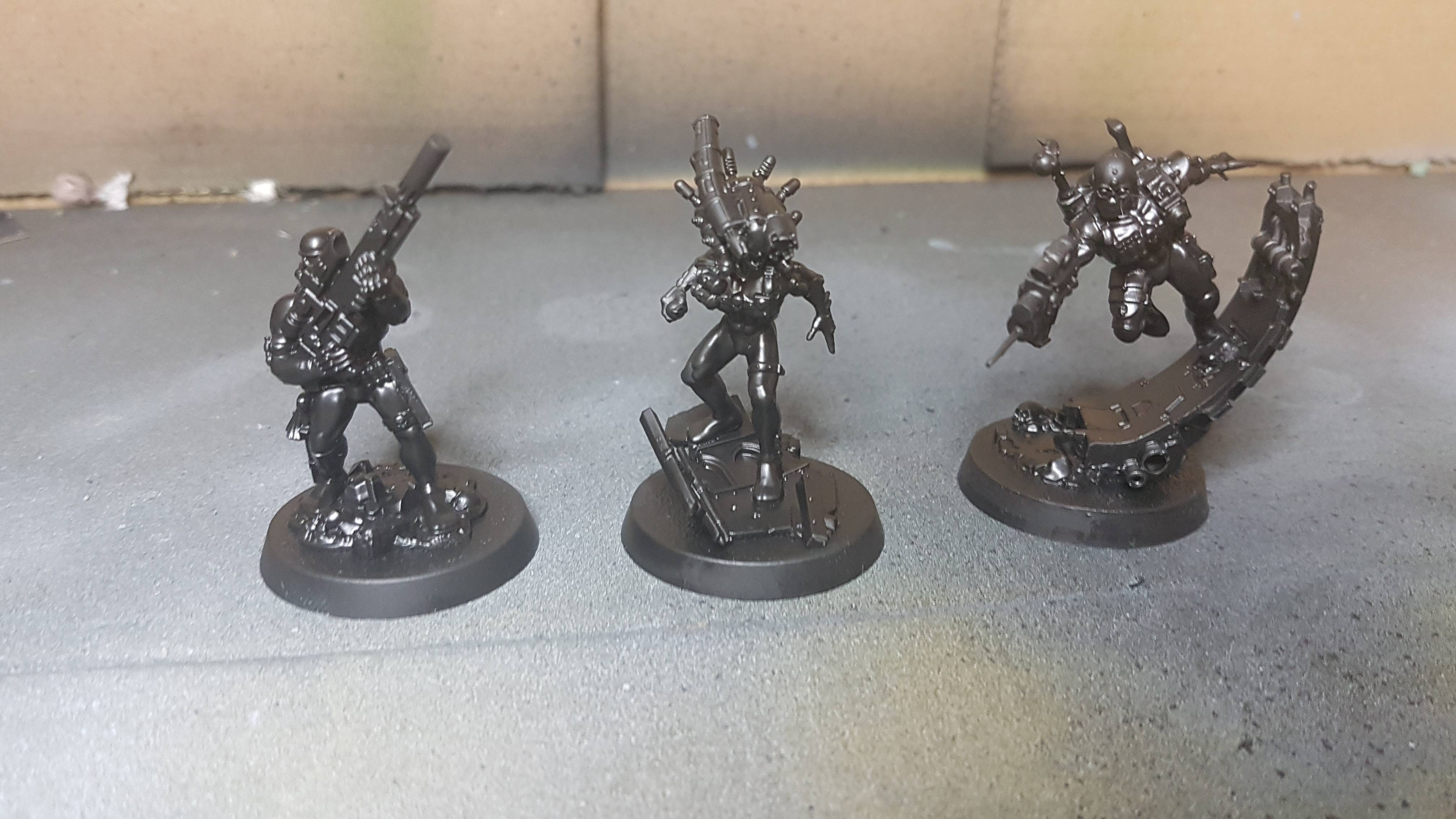 And had a root around the boxes I retrieved from my dads.
It was a razorback! 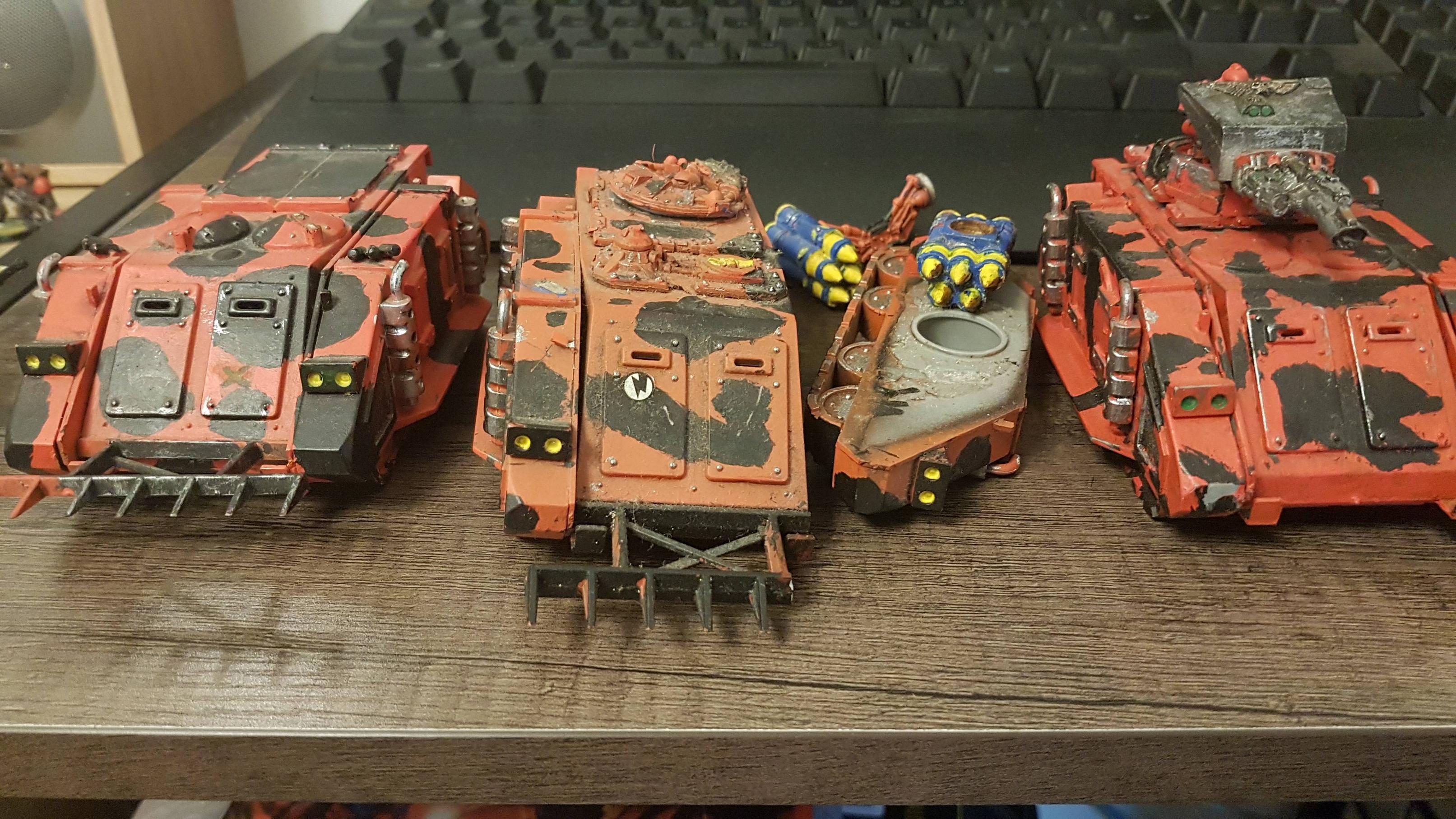 Not sure where I got a 1st edition dreadnought from... wonder if it's worth anything. 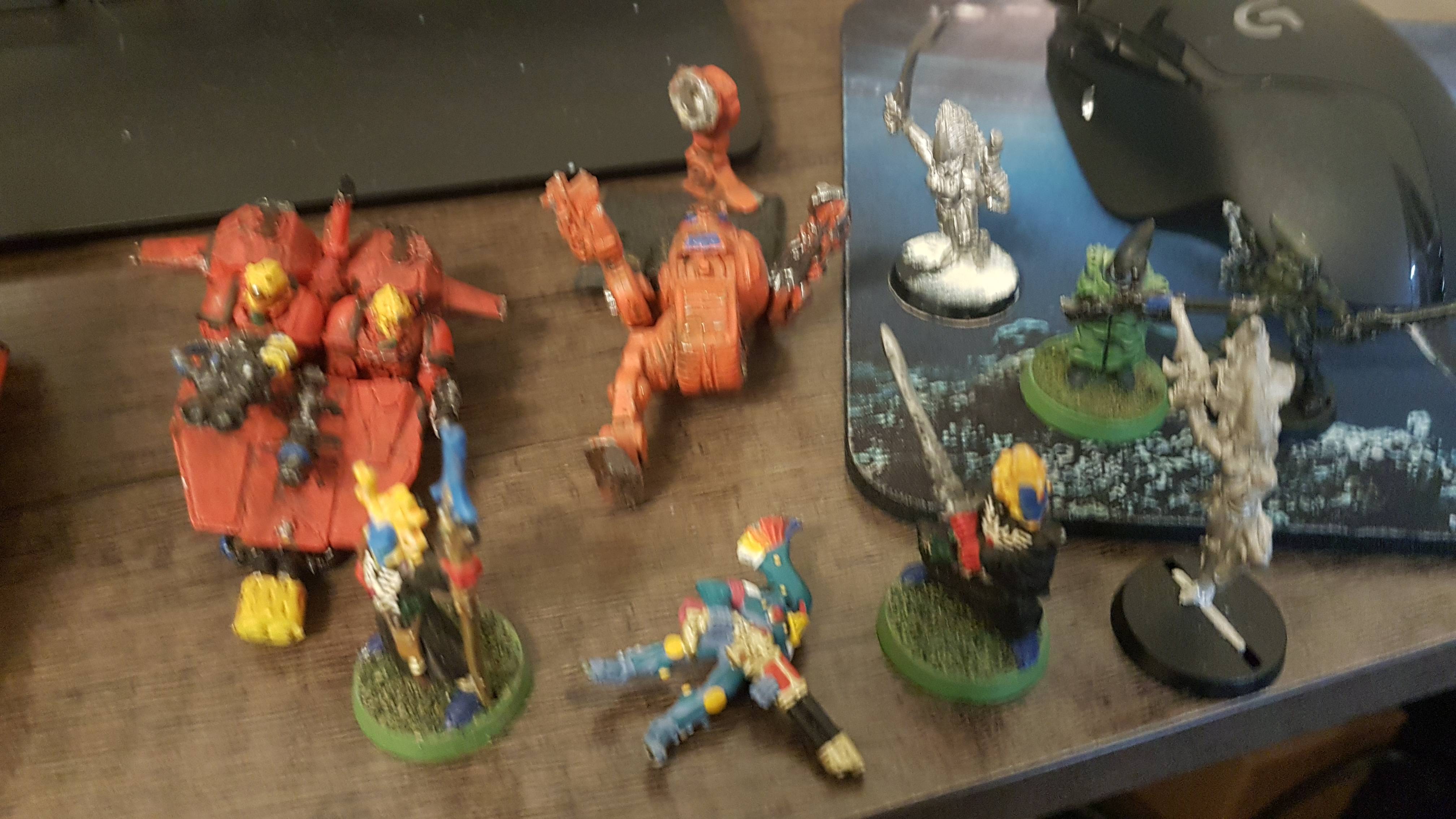 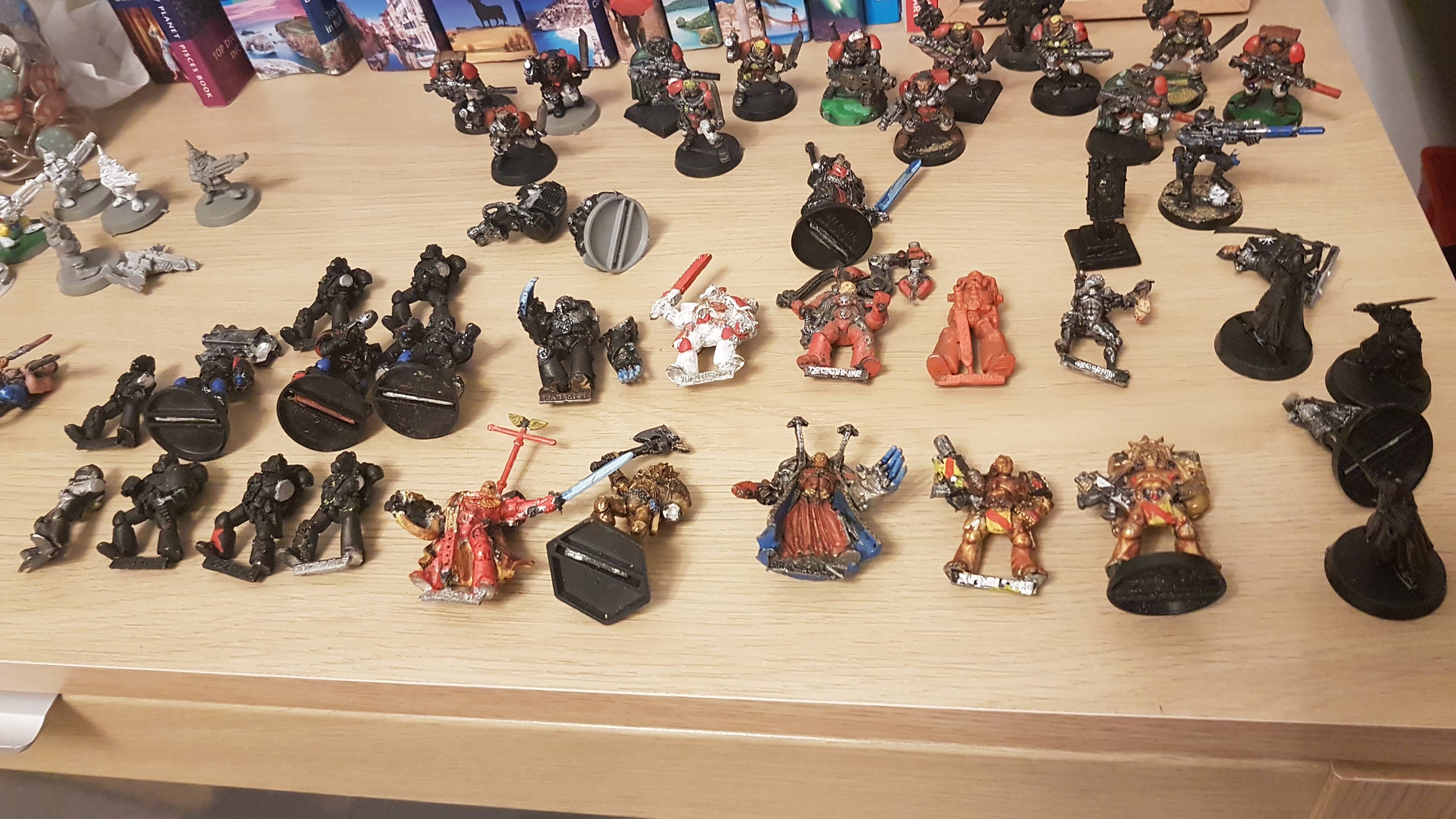 Also I'm pretty sure this will be the necron that came with white dwarf for the original necron release! 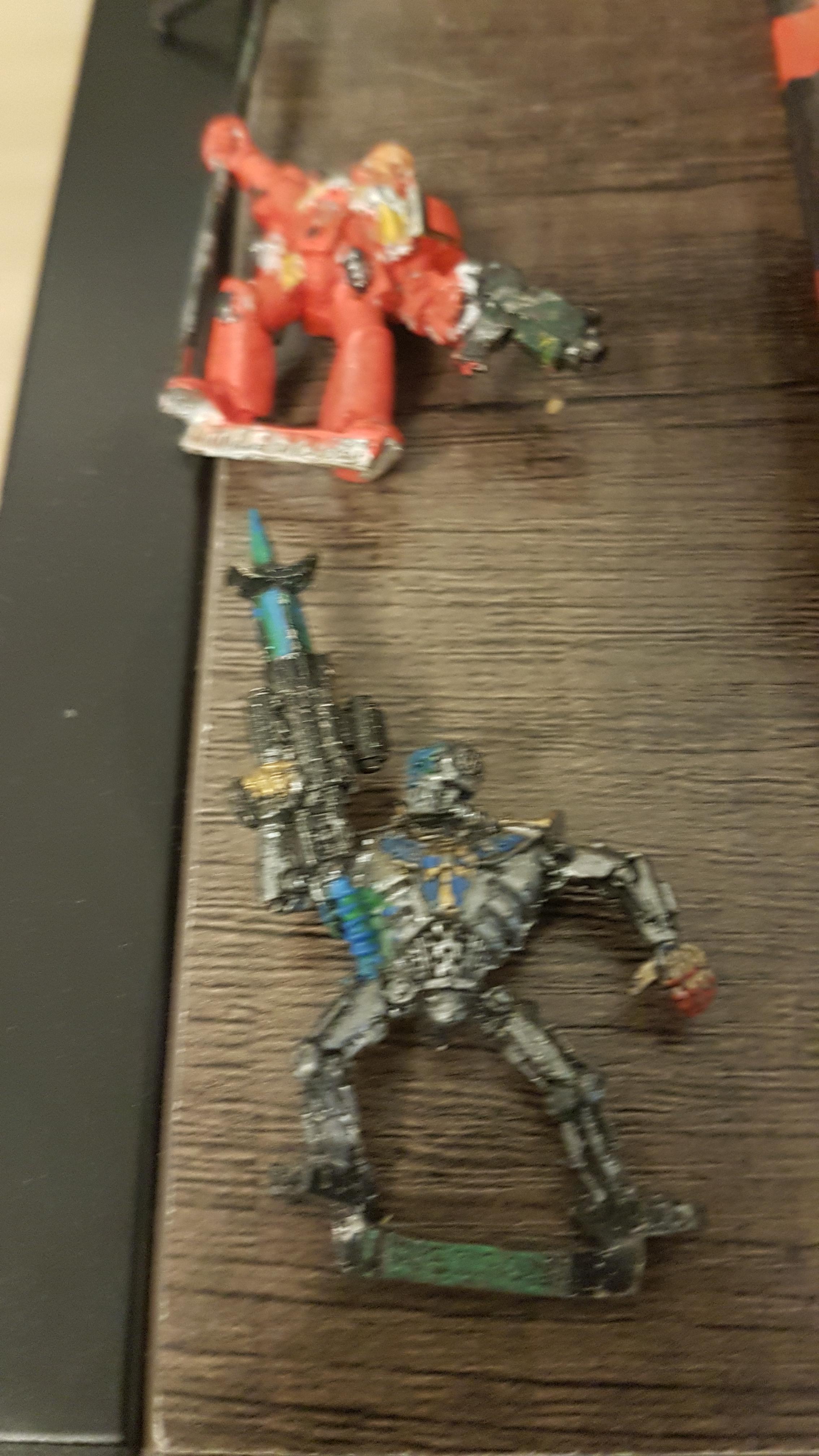 Can't find anything on eBay for the old dread but I'll keep looking for you! How much do you want for the Speeder/Techmarine?

there's a lot of characters in there that you'll get at least £5-10 for though - apothecary, Mephiston and Dante, Terminator Captain etc.

And I thought the free Necron was one of the shooting guys here? 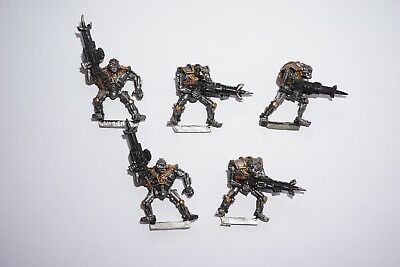 Paying full price for your models, paints and tools? Don't!
Use our banners after the first post or at the bottom of the page for up to 25% off RRP!
Then bag yourself double reward points with code PAU6006 - simple!

Haha you love the heaviest bits of metal

that landspeeder feels like it weighs more than my full plastic death guard army combined.
Yeah if you want them mate sure. What's a fair mates rates price

is there anything else from that era your after? I've not gone through it all fully.
Oh and I found the other dark vengeance mini... (not the gun though I'll need to dig around for it) so I can send you that too.

Haha I hope I can get some money for them but I did some horrible things to them. Dante had a daemonette claw and mephiston had a lightening claw... no idea why I thought it would be good.

Hmmm not sure about the necron then. Can't imagine I would have bought one by itself. I remember being quite pleased with the paint job lol

It's partly nostalgia, partly the fact that they just look so damn cool! I think that some of the older sculpts had a lot of character, and a certain feel to them that's missing now. The newer sculpts are much better technically, and most of them still look fantastic, but the classic models often have something just a little bit special. And then there's the Techmarine, which I just want for a full set

So long as the originals haven't been 'damaged' and it's just missing parts you should still get a reasonable price for them. Even incomplete metal often sells at the £10+ range.
I've got a couple of classic bits myself (mostly fantasy) that I'm hoping will fetch a couple of quid.

It looks to be from the same 'set', but I'm not sure without doing some digging.

... so I did some digging and you might be right.
It's poor quality, but here's a copy of the issue with the (opened) miniature. 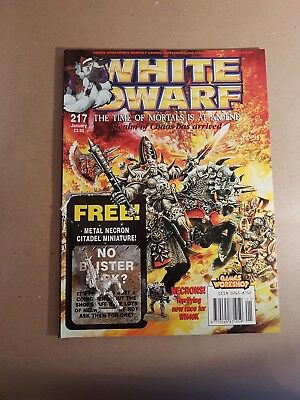 Paying full price for your models, paints and tools? Don't!
Use our banners after the first post or at the bottom of the page for up to 25% off RRP!
Then bag yourself double reward points with code PAU6006 - simple!

30 Jun 2020, 15:45
Haha I do agree the older stuff has a certain magic to them that especially in the space marine world they seem to be lacking now. What do you think about the stuff in indomitus? Maybe abit more character.
Haha coool I'm in no particular rush to flog or sell so I'll let you know when I have a proper root through it. I think you've probably seen the highlights tho.

I probably do have the weapons somewhere. It's just going to require some time to properly get it all out and dig through the flock at the bottom of the containers.

Haha yep I'm pretty sure i had that issue

surprising they didn't give the cover to the necrons!