I am an incredibly slow modeller. I have ideas and plans that I never seem to get round to because there's always a skill or a technique I want to learn first, or a product that I want to try but don't have, and because my opportunities to actually work are very limited.

This blog will cover everything that I work on, with (I'm sure) a never-ending list of reasons why I haven't made any real progress. Excuse #1 above is why tonight I will be sat behind a screen instead of sat with a scalpel!

So, my current plans?

Firstly the painting of Aenur, Sword of Twilight - a ~20 year old model that older Mordheim fans might recognise! This model is intended to be an entry for both the DRPA 'Orange' challenge and our 'Just One Model - January' challenge, and so will need completing by the end of the month. Excluding tonight that gives me 3/4 possible evenings where I might get hobby time! I did however receive a parcel today containing some things that might get used for the model... 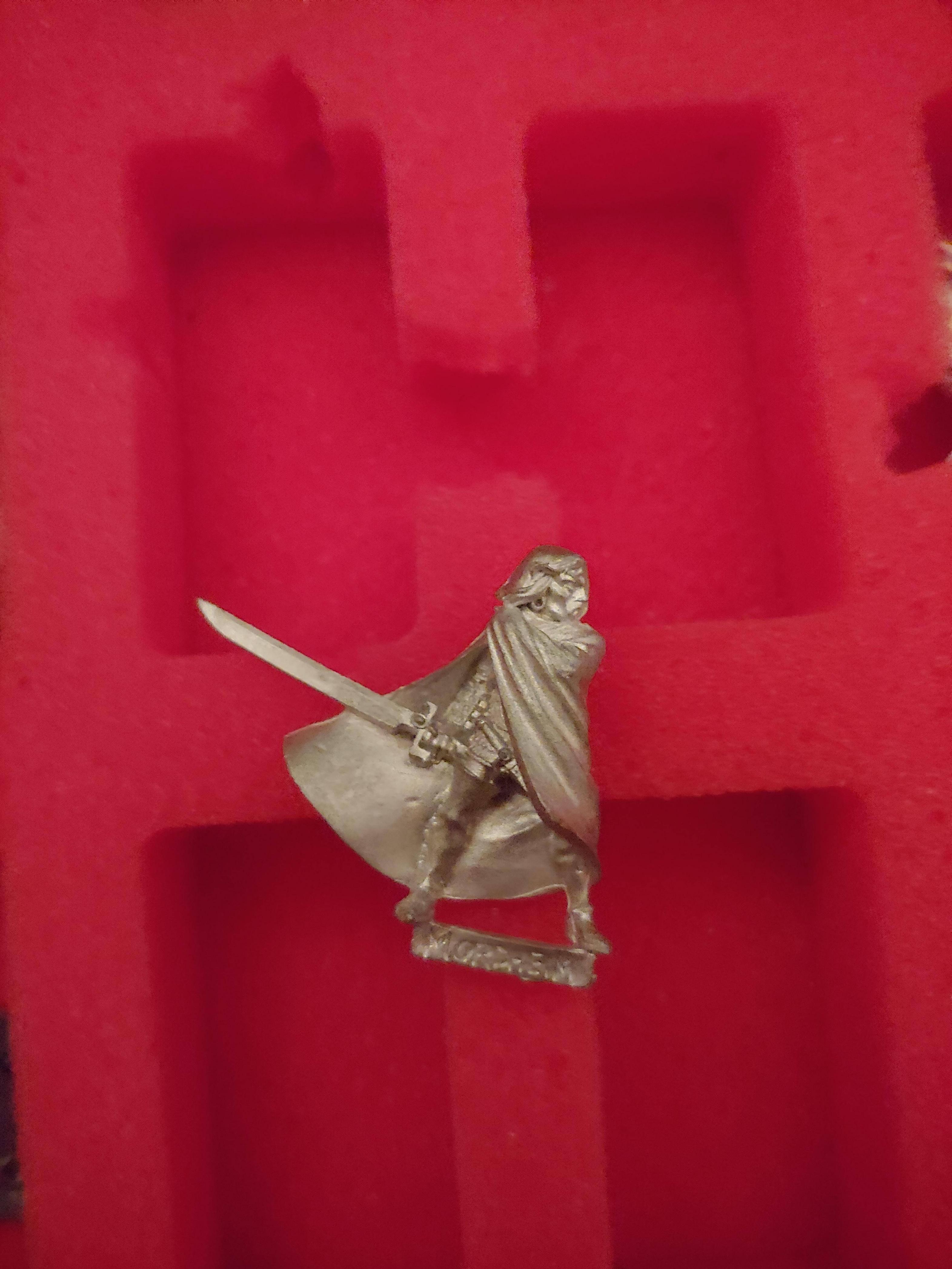 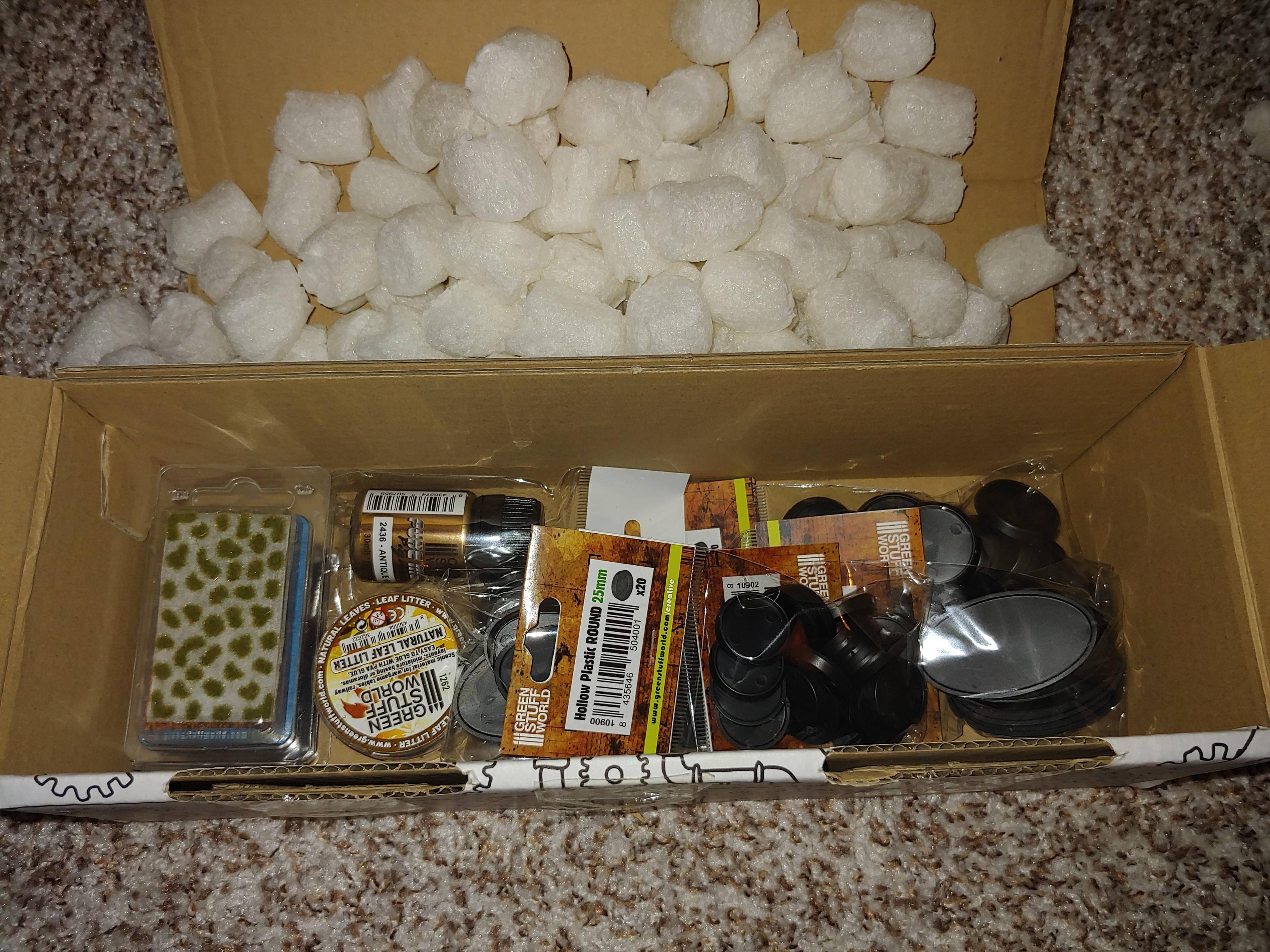 Following on from Aenur I also have a more long-term and slightly scalier project that looks something like this: 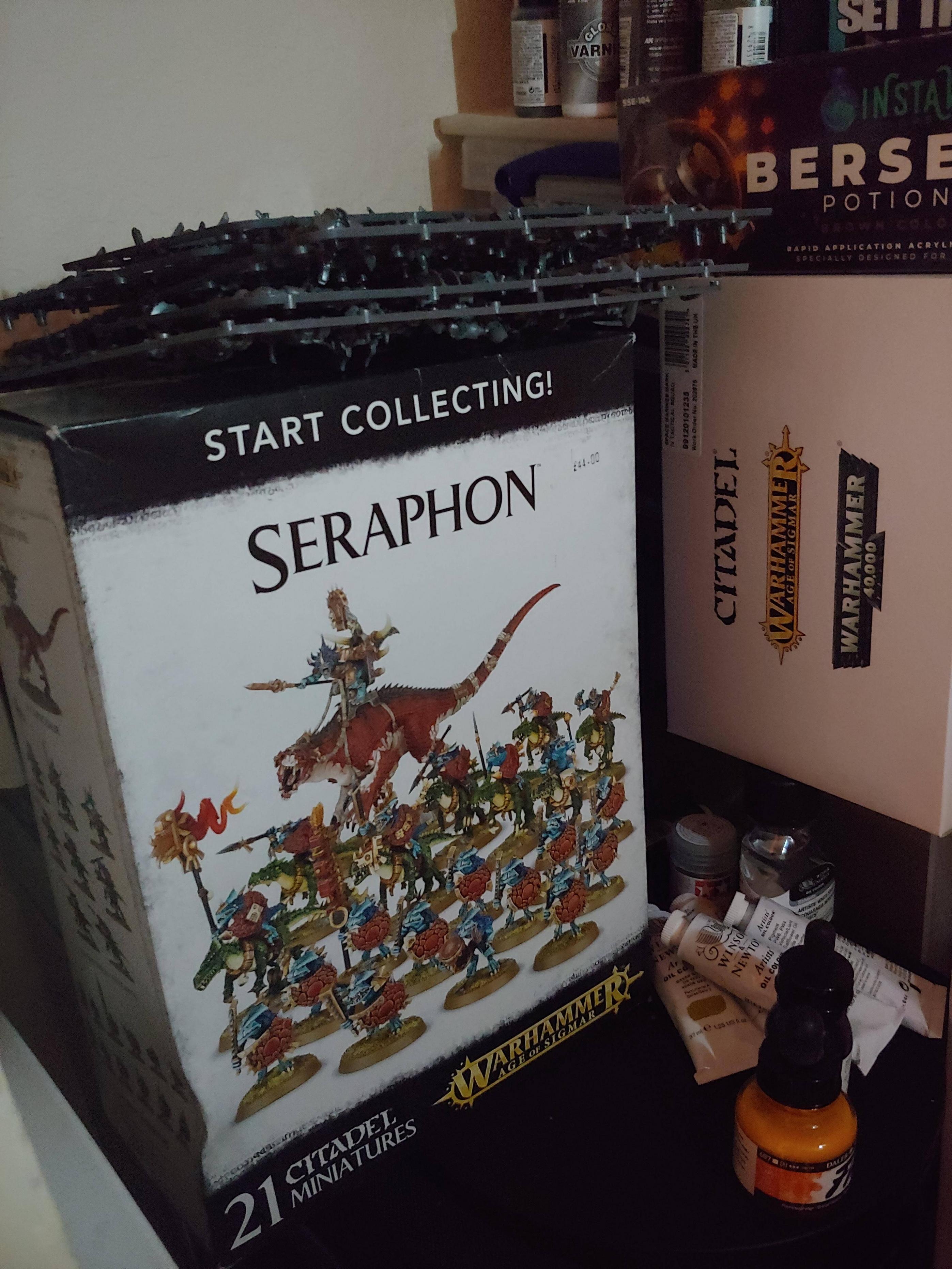 Please excuse the state of my hobby cupboard - this is a very flattering photo!

My plans for these guys are a bright orange and teal schemed Seraphon force making their way through swampy terrain, but more on these guys later!

So for now I leave you with my first excuse and a promise to actually paint something this year!
James liked this
Paying full price for your models, paints and tools? Don't!
Use our banners after the first post or at the bottom of the page for 22% off RRP, and 25% off pre-orders!

I really think you CAN do this. I think you just need to take the plunge. Sit down and get it primed first. Goal 1 done.

Try not to worry about the end product too much. And get some base colours down. You could even consider it a test model.. Do the model to a very raw standard with the idea to come back to it later so you don't need to worry about it being perfect now.
Karak Norn Clansman, pawl liked this

I've filed down (hopefully) all the mould lines, and smoothed out the file marks with high grit sanding sticks. His feet are tiny, so rather than pin I opted to keep the slotta tab. I filed down the bottom to reduce height, cut a hole in the base (which I covered underneath with plasticard to increase strength) and stuck him in.
I then sprinkled a little basing material down - this is purely to fill out the base, and while it will get painted it should be fully covered by the end. I wet it with 50/50 iso/water and then drowned it in 50/50 pva/water, which I may yet have to do again. At this point I realised I hadn't filed down the top of the slotta tab, but this shouldn't be a major issue.

Excuse the poor photo, but it wasn't worth decent lighting! 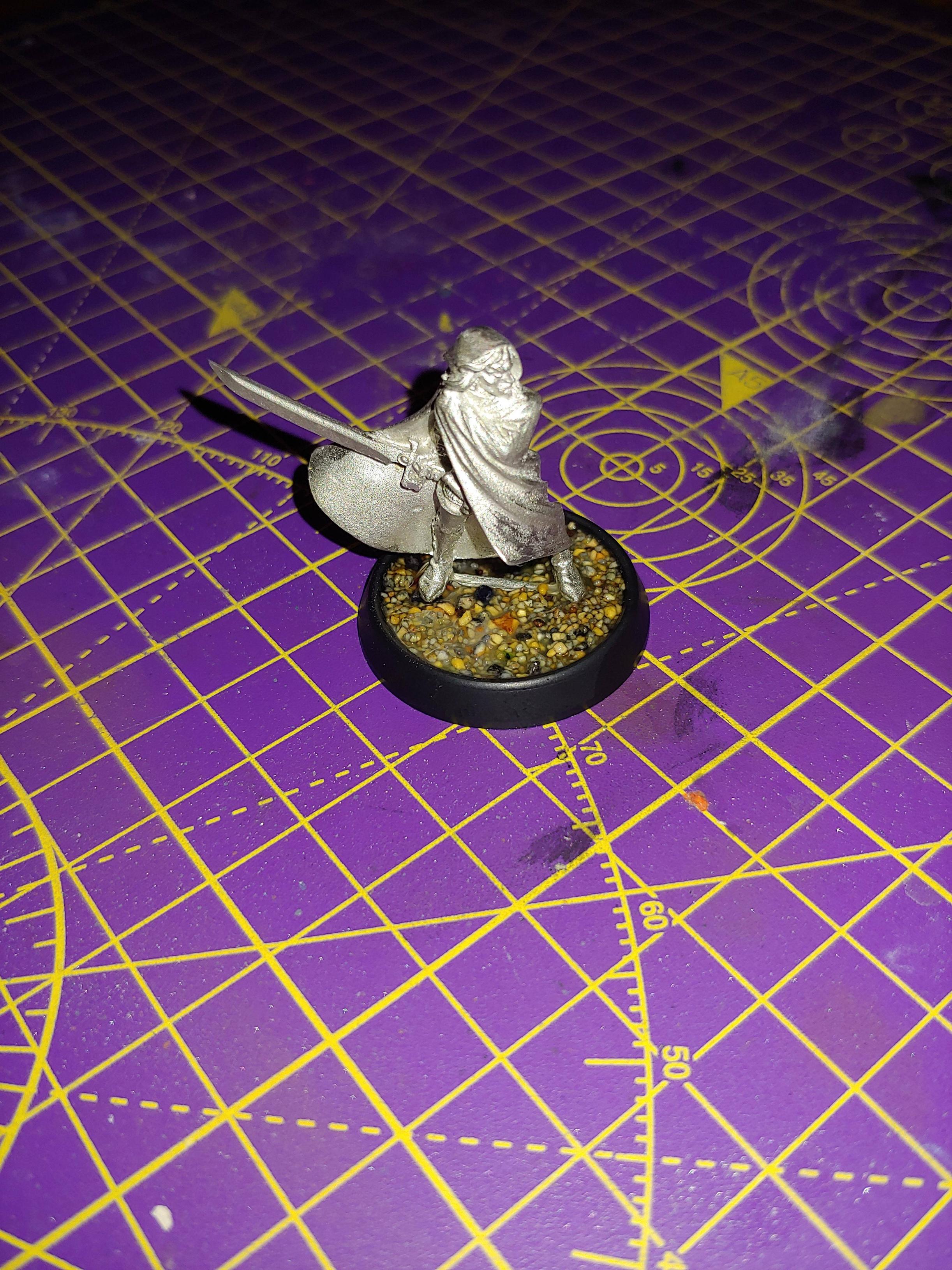 I got the airbrush out again tonight in the hope that I might be able to produce slightly better results than in my first attempts, which were... let's go with 'poor'.
My vague plan was to take an old elf and turn him brown, then ivory, then maybe slightly white. In this regard I was somewhat successful, in that he did in fact turn all three colours. Unfortunately my post doesn't end here however.

My previous airbrushing attempts were my very first, and so obviously a degree of failure was expected. I found that my primer (AK Interactive) stuck better to the paint cup than my models, my trigger control was woefully bad, and that an incorrectly-adjusted compressor mixed with both over-and-under-thinned paint can lead to a poor spraying experience. Since then I have learned about the difference between 'resting' and 'operating' pressure (nobody seems to talk about this in the "how to start airbrushing" videos!) and changed from the tarry hell that was AK's primer (I'm sure it's fine, and it's just me!) to the Molotow all4one paints much vaunted by NotJustMecha's Marco Frisoni. A recipe for success, surely?

Well, initial signs were better. Pressure was set at a more reasonable level, paint didn't appear to need thinning, and when I pulled the trigger back paint came out in a continuous burst, and not fits and starts. I found that sometimes I could even get it to spray in roughly the direction that I wanted! Still might have to buy a laser pointer though...
Unfortunately towards the end of my session I found that my primer layers seemed to be cracking or peeling: 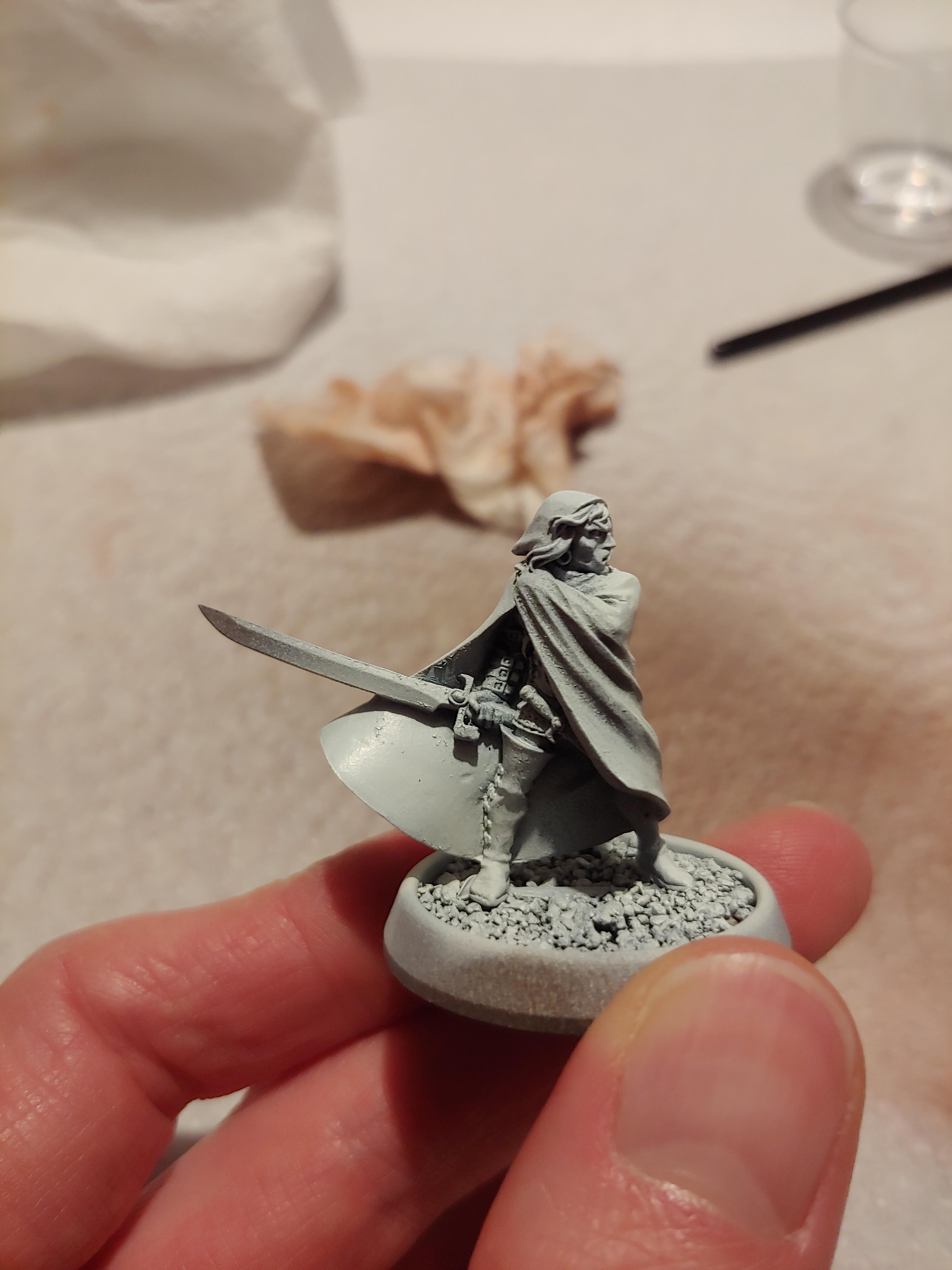 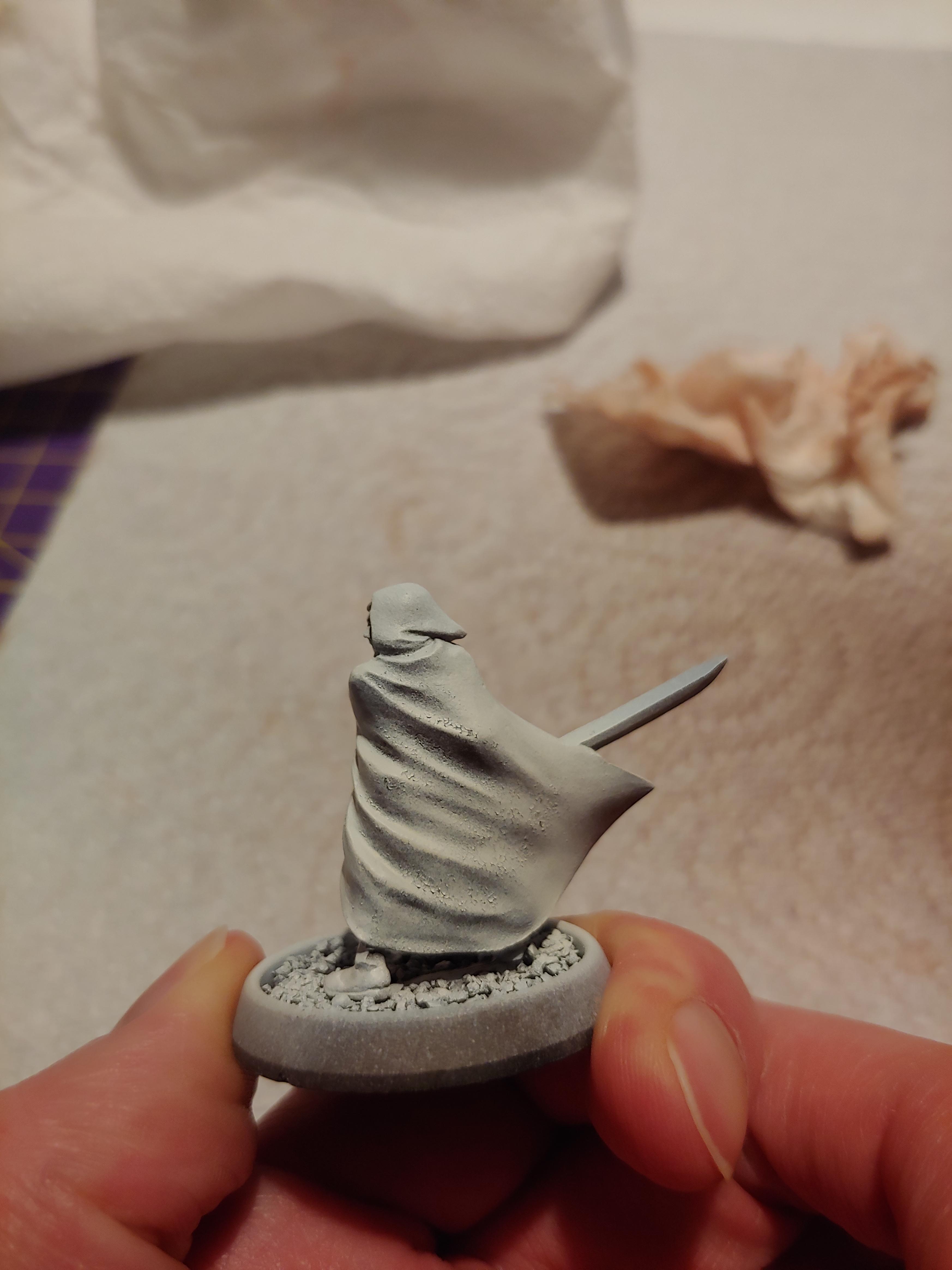 In particular check the cloak just above the sword, and basically all of the back. Not sure what the cause of this is yet, but I would assume it's trying to spray over paint that hasn't fully cured? Or perhaps simply spraying too heavily, but I thought I had done quite well on that front. Any insight here would be greatly appreciated! And yes, I know the lighting is still awful - I forgot to take photos until I had nearly finished packing away!

So while I have managed to partially achieve what I set out to do I now need to go back to undo and redo half my work. Not ideal! I think that tomorrow Aenur here will be meeting with a sanding stick before getting blasted again. 6 days until this fella needs to be finished!
Paying full price for your models, paints and tools? Don't!
Use our banners after the first post or at the bottom of the page for 22% off RRP, and 25% off pre-orders!

It's a slightly disappointing feeling when you realise that you're not enjoying painting a model. Particularly when it's one that you were looking forward to.
I managed to find a little time to start working on Aenur, and also to try out some of the Scale75 Instant paints at the same time. From the painting session I had two main takeaways:
1. Scale75 paints go everywhere when you don't pierce a big enough hole in the dropper. I've managed to avoid this in the past but finally had it happen. I was not a happy bunny!
2. Some old sculpts simply have stupid angles to work in!

Aenur is a pain in the arse, to put it bluntly. All of his details are recessed, at funny angles, and hidden underneath and behind each other. Trying to get a brush into anywhere without hitting everything else is an absolute nightmare as everything is so cramped. Trying to get him painted up has been a very frustrating experience, and to be honest it's actually rather disheartening. I will finish him of course (thanks for the words of encouragement James!) but the quality is going to be decidedly sub-par - very much a case of "Contrast wherever I can and run away!"
Will I ever come back to him? More than likely. I've had the model for ~22 years and when I was younger I was too scared to paint him, so one day I would like to give the model the paint job I feel it deserves. For now however he'll be an exercise in frustration and resignation, which is a real shame.
Paying full price for your models, paints and tools? Don't!
Use our banners after the first post or at the bottom of the page for 22% off RRP, and 25% off pre-orders!

28 Jan 22, 23:04
Positives to take away that you are very close to finishing the first miniature in ages buddy! And hey its all practice, right? And I'm sure it looks better than your letting on but it just means the next model will look even better next to it

And really the objective was to complete a model in the month, and we almost there!

29 Jan 22, 00:02
I suppose this is true, yeah. Even if I hate it and it's way below the quality I expect, it's still technically a finished model! And I can come back in with something that's not going to be quite such a nightmare to paint!
Paying full price for your models, paints and tools? Don't!
Use our banners after the first post or at the bottom of the page for 22% off RRP, and 25% off pre-orders!

So I didn't finish Aenur on time. I had hoped to get a final January hobby evening in to just rush through him (I'm not planning on putting any effort in to be honest, because I'm not enjoying the model. He might get repainted some other time) but redecorating the living room took a little more time than we were expecting, and it just didn't happen.

Aenur has been re-pledged to redeem my failed oath in our Just One Model contest, but I'm ignoring him right now because he's annoyed me! Instead, tonight I spent a little bit of time getting to know these guys! 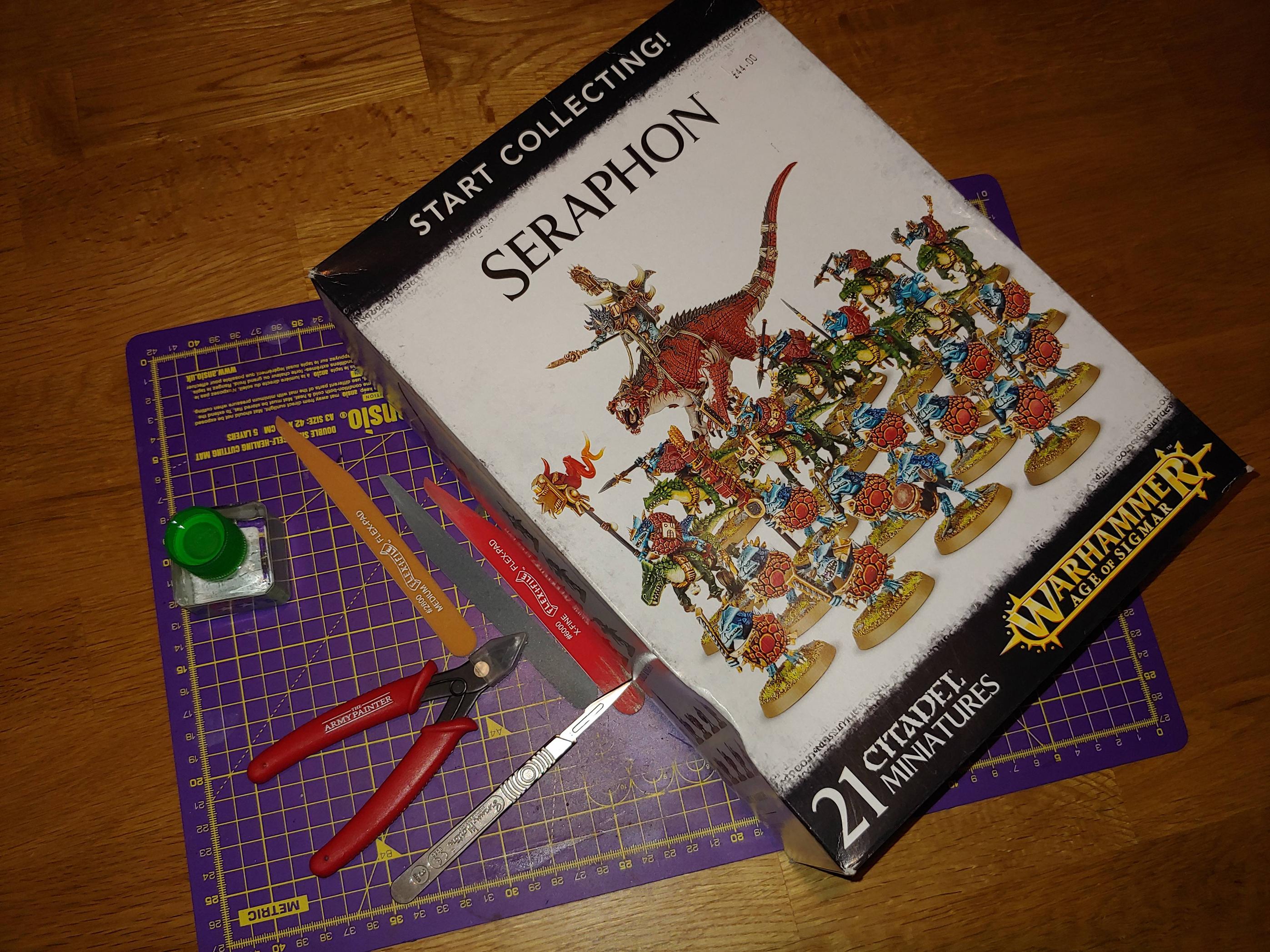 Naturally I went straight to the cavalry, because two lizards per model is better than one! The sculpts are showing their age a little bit - these guys first came on square bases, right? - though when compared to the general standard of newer Citadel releases. Generally they're not bad, but the saddles are truly awful! I can't seem to find any of the heads with open jaws that are pictured on the box art, but maybe that's just bad luck?
The shields being attached to arms across the range is also annoying, but I'm sure I'll just make a mess and come to accept it!

Due in part to my obsession with mould lines an hour or so sat at the desk has only resulted in two Cold Ones and a single rider, but I'm still happy enough with the evening's work. It'll be quicker in future I think. 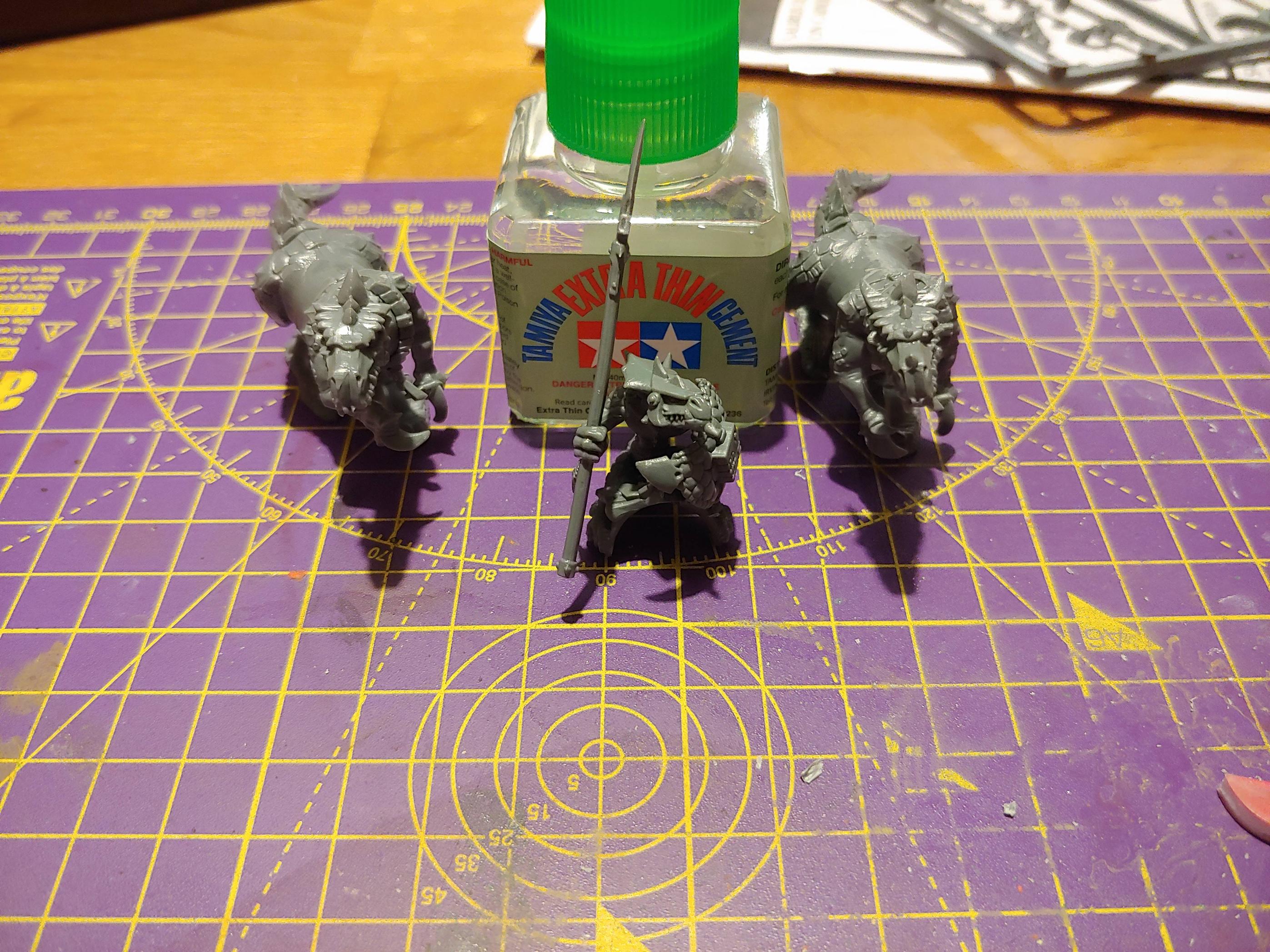 In other news I broke my self-imposed eBay ban (I have neither the money nor the need for more plastic!) by bidding on two auctions, both for more Saurus Knights. ~£28 has got me 15 more coming still on their sprues, which I don't think is too bad at all!

So that'll do for now I think, as my work-weekend is about over. If I manage to find time next week we'll hopefully see a badly painted elf in his finished state and more scaly things!

You should have taken an oath to decorate your livingroom!
I have no idea what I'm doing.