Hope you are doing well.

Lately i have been working on some terrain and more objective markers for my battle sisters, this one is specifically based for them.

Introducing the sarcophogus of my Canoness.

To go with my custom order i also have my own story about my Order which i will right about in more detail in the future and in the battle sister section of this board, but a whislestop tour is,
Celenia, discovered at the age of 11 on a world which was in the middle of a Slaanesh invasion, a team of Order of the Bloody Rose Battle Sisters, where purging the city, when they discover the young girl, attempt to kill her, but Celestine appears and protexts the girl, commenting to the Squad that the girl is of the same image as Duty, one of the Characters Celestine works with to return to the fight for the emperor.
Celenia is then trained for 5 years with the battle sisters, seeded to become the best battle sister ever, but suppressed by her Superior Lovinium, who hated Celenia.
But at the age of 16 she manifest psyker powers, and is picked up by an inquisitor, who wants to use her power to improve his own status, Celenia abandons the Ecclesiarcy in favour of the inquisition, where her powers will be celebrated and not forbidden. while she is out kicking ass for the inquisition, her friend and closest ally breaks away from the Order of the Bloody Rose to create a new Order, an order devoted to finding and returning Celenia, to
She works with Inquisitor Thanatou for 6 years before her untimely demise due to Thanatou's own ego.
Thanatou, deeply wounded by the loss of his love and closest ally, returns Celenia's body to her order, they then proceed to place her in her final resting place, but shortly after they seal the sarcophogus, the lid smashes, and Celenia rises once more, in an act Divine Intervention (Battle Sister Strat to return a character to the battle field after they die), but, her light has abandonded her, with her hair changing colour to brown, whenever she now dies on the battle field, she returns, in the sarcophogus, ready to kick ass for the emperor oncemore.
She then takes her true place within her order, Canoness Celenia, The Lost Saint.

Hope you guys like it, her weapon preferences are Relic Bolt Pistol and a Blessed Blade, so the sarcophogus has a sword in it, so i though a little grumpy cherub to hold her bolt pistol should she return again.

Let me know your thoughts! 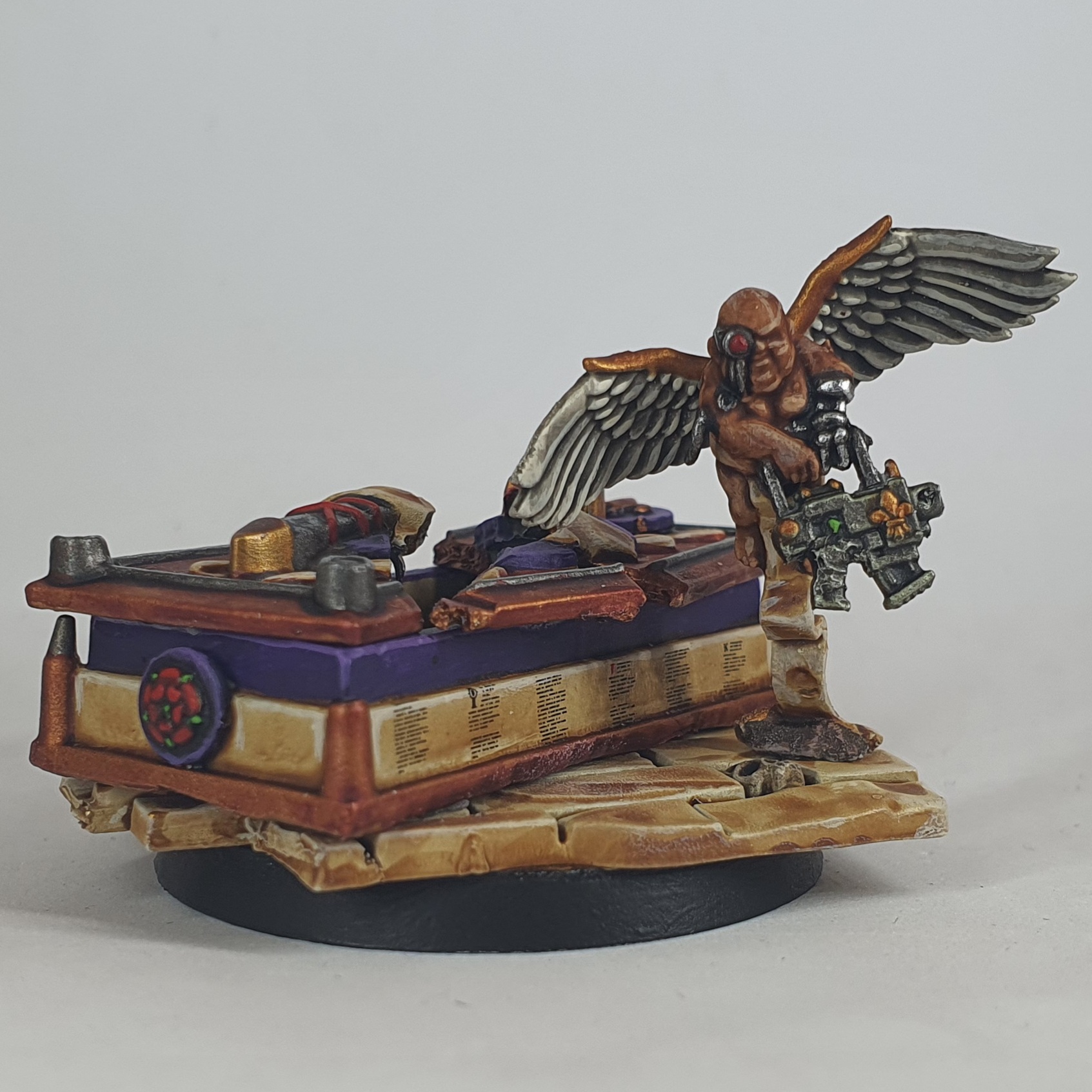 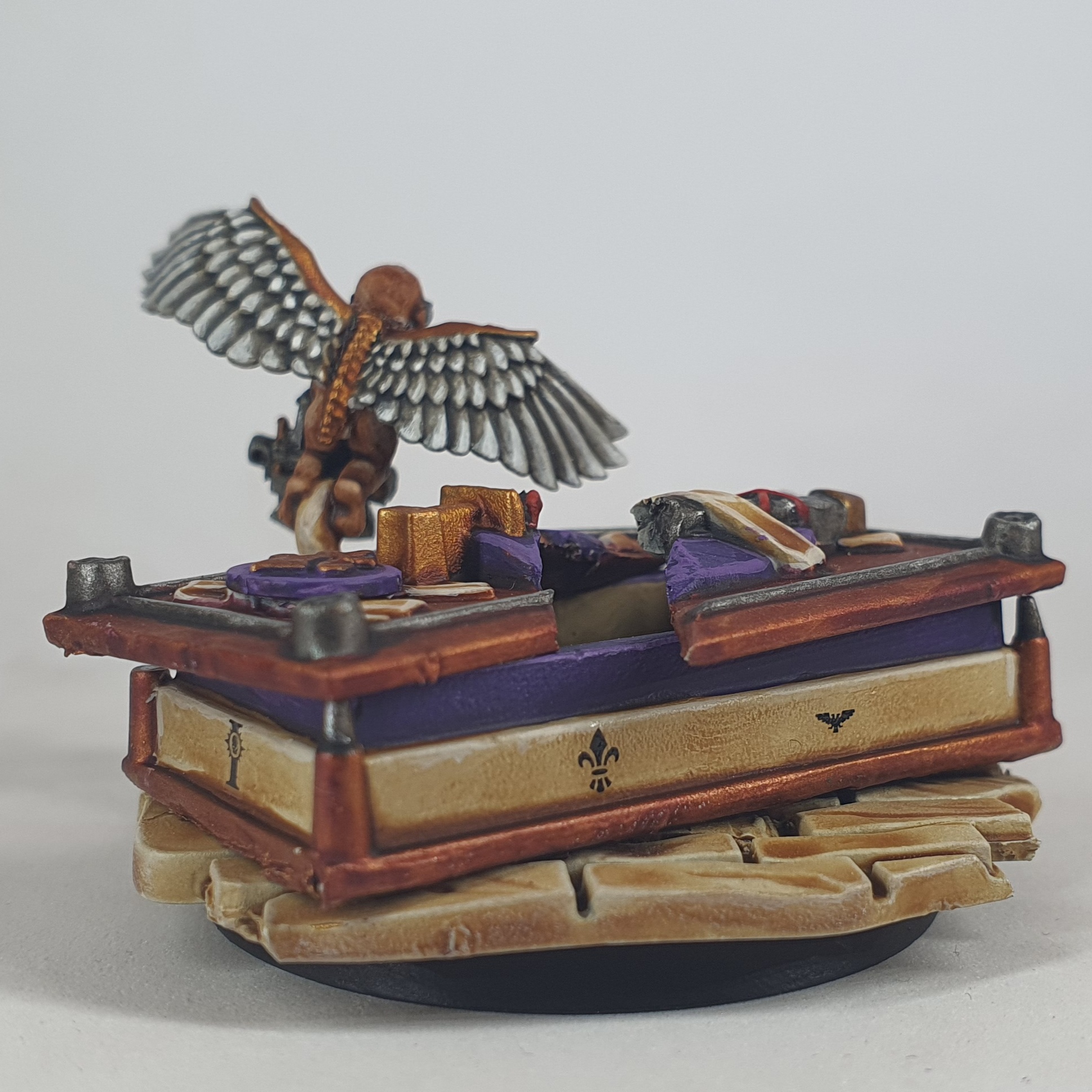 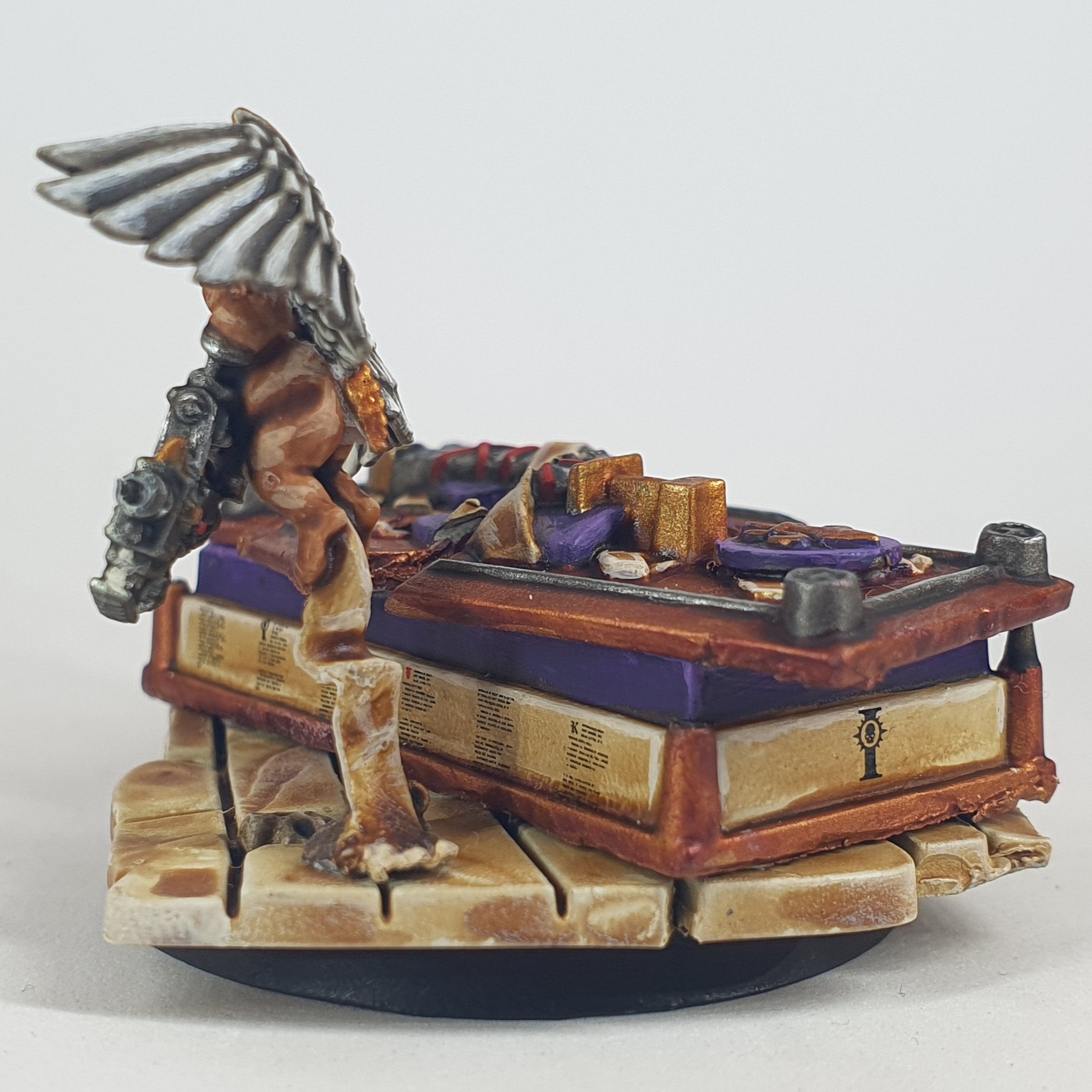 13 Mar 21, 01:41
Great story and lovely objective marker!!
Is the sarcophagus from the sigmarite mausoleum? Ive just put one together and it looks familiar

You are correct, it is indeed a sigmar sarcophagus, slightly altered to remove logos and replace with battle sisters stuff

14 Mar 21, 17:56
That would be quite the objective! I like the backstory too. The Ork in me thinks you should attach it to a catapult, so that in the event she falls you could have her respawn in the middle of enemy lines

James, ldubya344, DW1986 liked this
Paying full price for your models, paints and tools? Don't!
Use our banners after the first post or at the bottom of the page for 22% off RRP, and 25% off pre-orders!

15 Mar 21, 12:13
@James
Yeah, the cherub used to be a flamer Armourium Cherub, but i clipped the flamer tank off and stuck the bolt pistol on instead. pretty pleased with how it came out

@pawl
Thanks man, haha! yeah, when the character resurects its closest to its possition as possible, so its not quite themed in game, but its certainly an annoying thing for opponants, oh you killed my HQ, wait nope, you didnt.