05 Oct 20, 00:30
These guys were pre airbrushed back when I did the drones. So last of the pre production line. But have managed to get cracking with the base gold. Ive gone back to balthazar gold for these guys rather than the brass scorpion I've been using for dg recently. Plan to get through these guys as quick as possible... last time i did plague marines it took me months to 5 so im hoping now ( a year on ish since i painted the other group) i can smash 7 out fairly quickly while still looking effective. 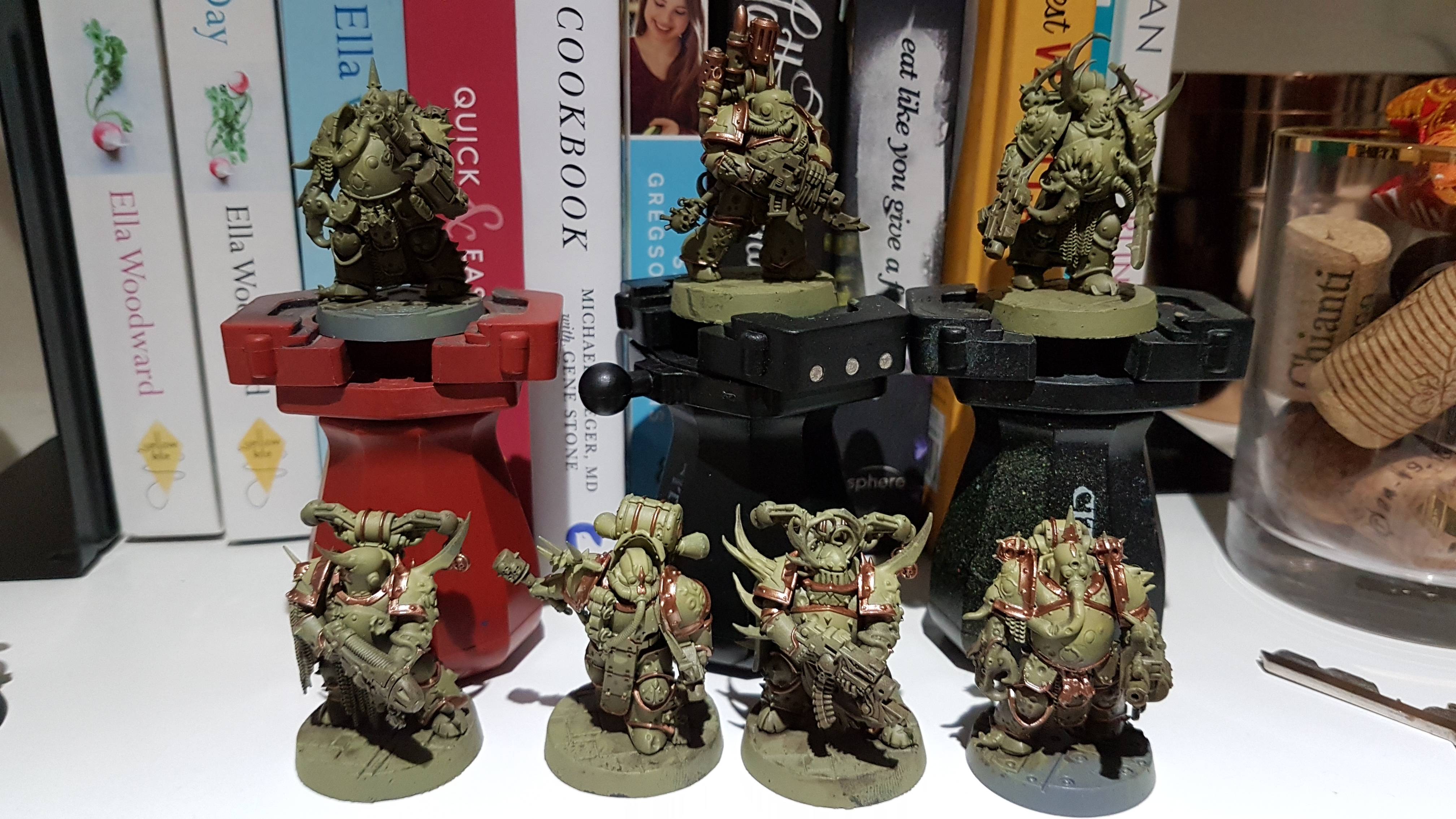 One thing. The two guys with blight launchers are the easy build ones. Man they are so poor in terms of quality compared to the dark imperium guys. (ETB ones are top left and bottom right)

What's your process? I assume something along the lines of green, bronze, silver, wash, details?
Paying full price for your models, paints and tools? Don't!
Use our banners after the first post or at the bottom of the page for 22% off RRP, and 25% off pre-orders!

05 Oct 20, 15:26
Hah strike while the iron is hot. I wana get onto some exciting minis sooner. So probably a daemon prince after this.

So ill probably do similar to the surgeon. But yes in these guys case. Silver next. Then the bone colour. The fleshy bits. Then weapons. Then washes where appropriate. Varnish and then boom enamel time.

Also if youve seen any alternative bolter schemes around let me know dont wana do them normal black way!!

My plan was to go black and then wooden where there's grain. Now I'm thinking about a bone-coloured scheme in general, so I don't know anymore

05 Oct 20, 22:19
Im excited to have another squad done but im also keen to not get bogged down in them for months but that will probably happen

Yep ill be batch painting. Got the gold to finish on two and then silver for all and so on. Brother Clarence preserve me!

Yeah I've seen some cool bolter schemes online that are quite different. My other squad are nice but the bolters are super standard. I'll ask around!!

06 Oct 20, 01:06
Couldn't sleep so thought id atleast use the time productively. Gold on last two. Grey onto the bone detail. Decided I'm going to glaze these into dark grey bone look. Except any skulls ill do normal bone. 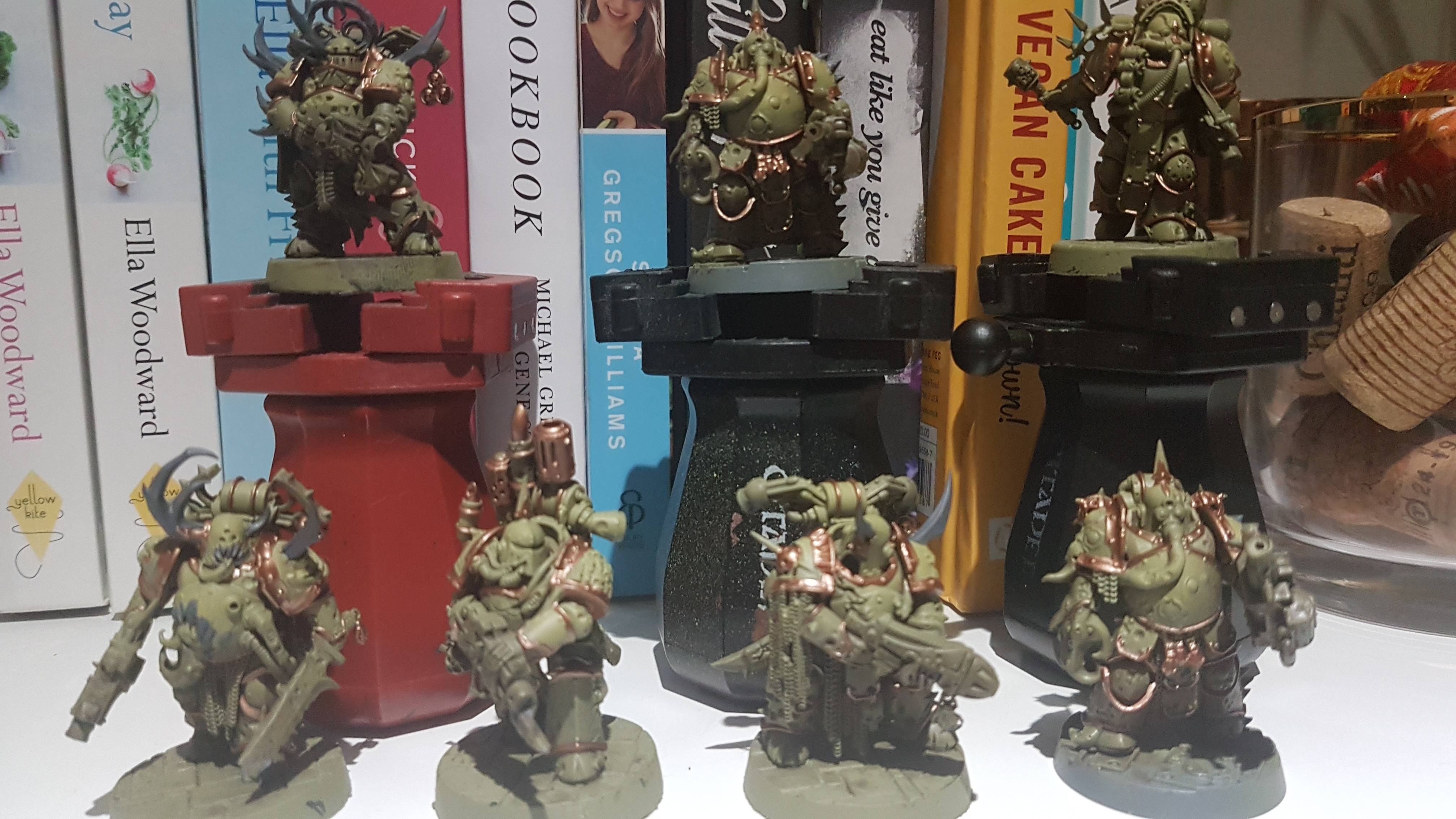 Silver next. Also need to decide on colour for the few who have capes...

07 Oct 20, 00:36
Getting further fairly quickly considering 7 on the production line. 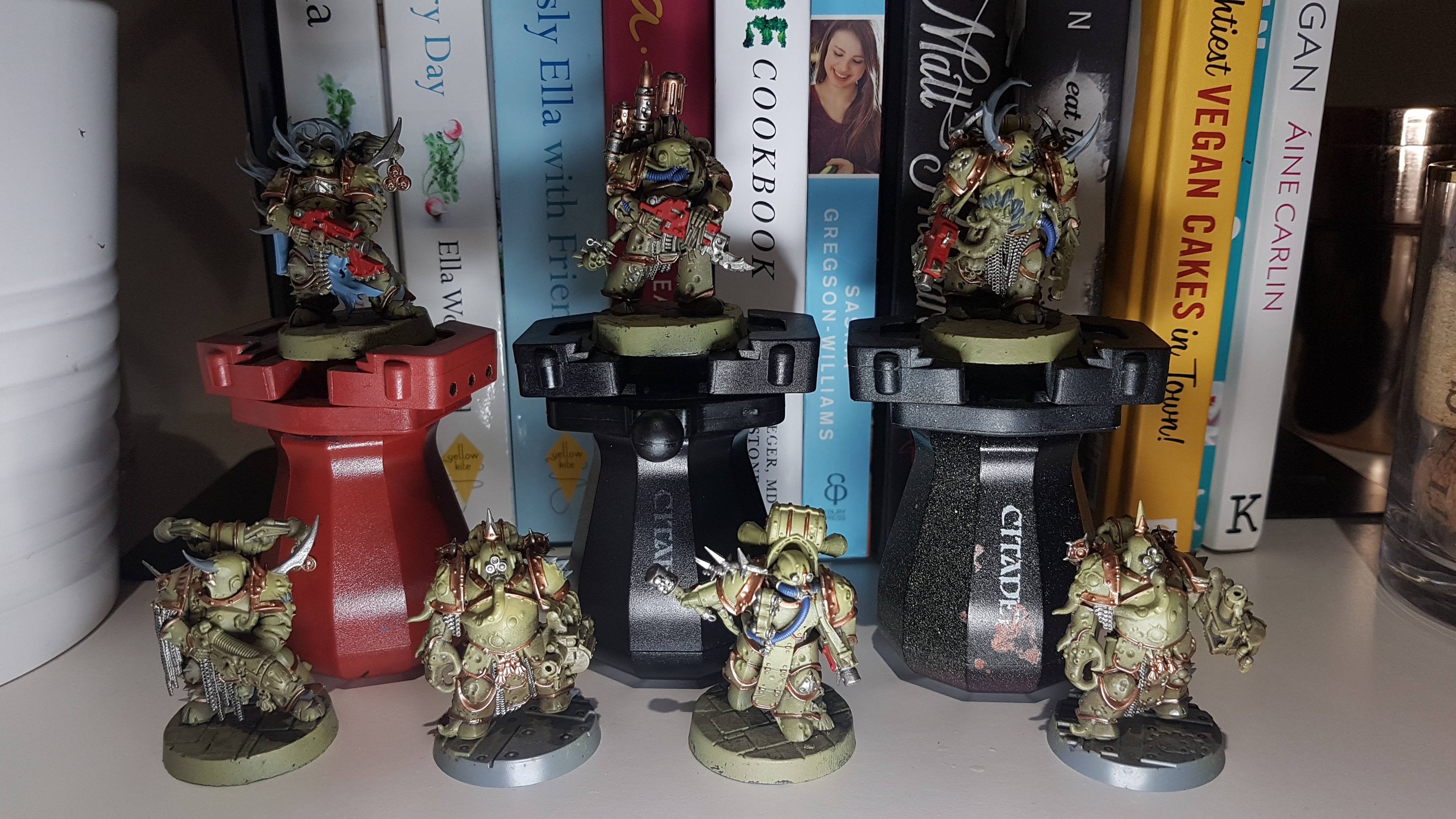 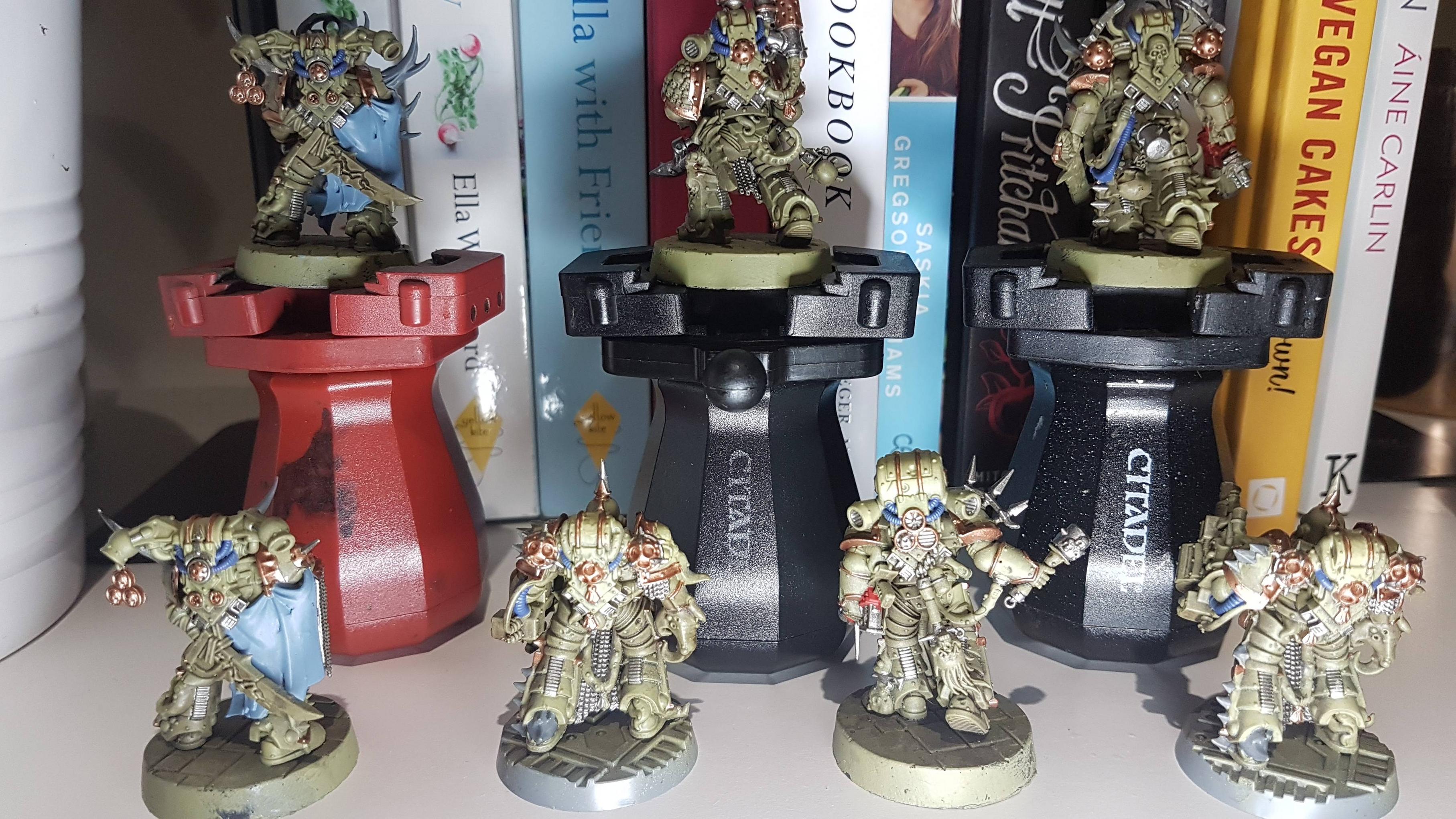 Apologies for the awful pictures..
Bone detail in... decided in going for a burnt black style bone like ive done on the noxious blightbringer previously. (Any skulls will be going regular bone style)
Im loving the red bolters. Silver in. Blue for the cabling just to be different. Oh and the capes are in russ grey currently. Looks better irl than the pics.
Still early days so expect all these colours to be dulled down significantly.
Need to do the fleshy tubes. Then any tentacles. Also need to consider how im doing the plasma gun and the plague swords/knives.

I would say orange or yellow for the plasma, too.
In some places it looks like you've washed the green, or is that just lighting?
For blades rusted metal seems to be the default for anything Nurgle.
Paying full price for your models, paints and tools? Don't!
Use our banners after the first post or at the bottom of the page for 22% off RRP, and 25% off pre-orders!

07 Oct 20, 20:22
Haha god i hope so. Really want to just burn through these guys. I don't think ill be able to get through that fast as i won't be happy knowi g leaving bits undone.. while i wont if things arent to the best possible standard. So will still be time consuming.

Yes a red or orange plasma is good. Ill probably leave the plasma effect to the end... good chance to try osl maybe... not sure how to do the rest of the plasma gun tho. Ill see what others have done.

Im thinking a bronze or a copper for the swords... but silver may just be easier!!

07 Oct 20, 21:49
Totally understand! There's an impressive amount of detail on these guys - I feel guilty even just painting the majority of the power packs one colour!

at least you don't have to go through multiple shades/highlights with everything though, as you can just muddy it all up and call it done!

Red would contrast nicely, but I think a green-yellow would look dirtier. Apparently real-life plasma colours would depend on the gas being used, but I don't think the death guard (or chaos in general) have to care too much about that! As for the casing, Google is always your friend!

So long as they're uniform you'll be fine. You could obviously do them all differently, but that will just take more time. Perhaps silver, a coloured glaze and then rust?
Paying full price for your models, paints and tools? Don't!
Use our banners after the first post or at the bottom of the page for 22% off RRP, and 25% off pre-orders!