New boxed sets, useless tools and game-changing paints - come and tell us all about your new toys or where you got them from!
Reply
Share

05 Apr 20, 15:30
So to kick-start my return to the hobby I've picked up a copy of Know No Fear and even though it's been out for a while I thought I would give it a quick write-up.


Firstly, let's look at the contents.
Inside the box you'll find models for both Primaris Space Marine and Death Guard forces, along with a construction guide.
The loyalists recieve a Primaris Captain, 5 Intercessors, 5 Hellblasters and 3 Inceptors
The heretics get a Nurgle Lord of Contagion, 5 Plague Marines, 10 Poxwalkers and a Foetid Bloat-Drone.
You will also find a transfer sheet, dice, a range ruler, a double-sided gaming mat and a 96 page book that contains information on the hobby, the galaxy in the 41st millenium, the two armies inside, how to paint and how to play. 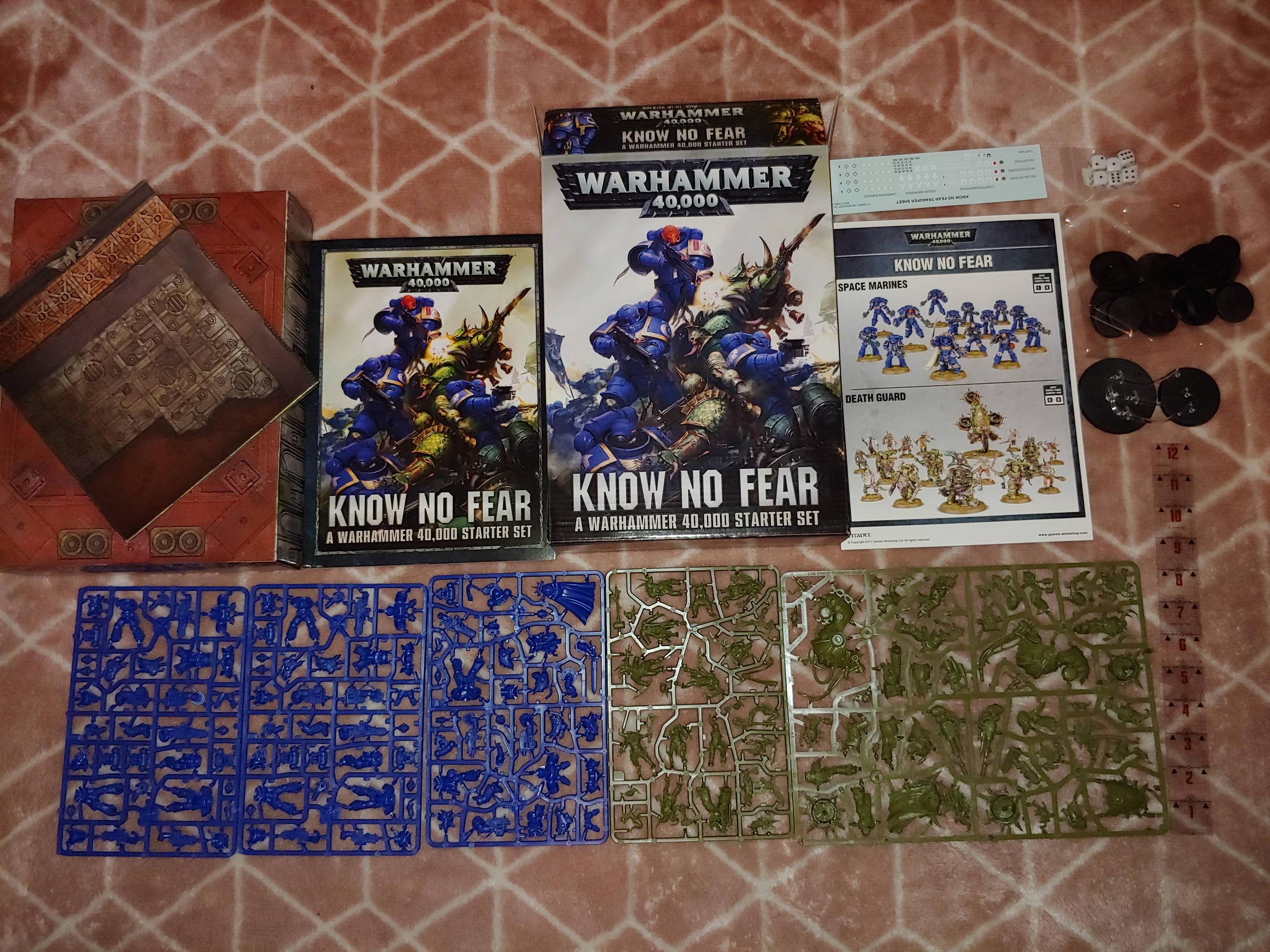 Not a bad haul, especially considering the price!
The models for each force alone would cost more than the starter set if you picked them up individually*, so even if you're only interested in the Primaris or the Death Guard you're getting a good deal.


You do however get the "easy to build" variety of models, which means that you're very limited when it comes to posing your models. Not an issue for first time players, or those looking to start/bulk out a force cheaply, but if you bought more than one of these sets then your army would look pretty static.
Know No Fear is one of three 40k starter sets, sitting between the smaller First Strike and larger Dark Imperium, all of which use the same easy-build sprues.
The models themselves however are of the same fantastic standard we've come to expect from Games Workshop. Colour-coded plastic, high quality casting, and I've really struggled to find mould lines. It is worth noting however that despite being "easy to build" that doesn't mean they're snap-together. You will need glue! The only let down, aside from limited posing, is the transfer sheet. The Dark Imperium transfer sheet contains a range of Chapters, but here we're only given Ultramarines. A minor annoyance though really.


In addition to the models the introductory book is really well put together. It's not a full rulebook, but it's of the same quality as a rulebook or Codex and is perfect as a first-taste. It eases new players in with a little bit of backstory to the universe, and the two forces inside. The important bit for most will be the rules and missions - there's six in total that teach the player in small steps how to move, shoot and fight. Once one section is mastered another section of the rules is introduced (with a mission) so that new players aren't overwhelmed. Thanks to this running through the missions quickly has players confident in the basics before anything gets too confusing.
The missions themselves take place on the included fold-out mat and, cleverly, the bottom of the box. The double-sided mat is based on the Sector Imperialis board, however it's slightly smaller in dimensions than the tiles would be. The overturned box acts as a bunker, although it doesn't fit anywhere on the mat without covering part of the design. That said, while I would have preferred actual terrain (even cardboard), the setup works well enough.

Lastly you'll also a painting guide (much better than the ones you could find when I started the hobby!) for all of your new models. Unlike the guides of my youth it covers concepts like layering, line-highlighting and drybrushing, which is a solid start for a new painter.


All in all, this is a solid starter set. It's not quite as big as Dark Imperium, but at nearly half the price (£50 RRP compared to £95, although they're cheaper in the links above**) it's much friendlier for someone new to the hobby - especially if they still need tools and paints! Particularly for loyalist Astartes players it also works well as an easy and cheap way to add some of the Primaris line to a firstborn force.


* some of the models you can't buy on their own or in the numbers present, but bitz sites sell them individually.
** feel free to use the code in my signature for double reward points!
Paying full price for your models, paints and tools? Don't!
Use our banners after the first post or at the bottom of the page for 22% off RRP, and 25% off pre-orders!