Another Portsmouth member... we are taking over!

New to the board? Stop in and let us know you're here!
Reply
Share

I’m also from Portsmouth, ready to join the forum and get to know you all!

I am personally more of a painter, I paint as a hobby as well as offering commission jobs on request.
I currently collect a few armies, 1 being my primary army, 2 being reserved due to 9th

and another one I’m hopeful to start painting soon!

I will start with my current main army, Battle Sisters, I loved the army since I first started, I loved the fact they are strong willed women who just want to kick arse in the name of the Emperor and the ridiculous religious zealotry they encourage.
I loved a lot of the lore behind battle sisters but one order stood out for me personally, and that was the Order of the Bloody Rose, but wanting to save the armour colour scheme for a future project, (I will talk about it later) I decided to create my own custom successor order using the rules and symbol for the bloody rose, with this I wanted an army that not many other people would have, I spoke to Warhammer - Portsmouth, telling him that my primary colour for my army would be purple (fabrics and vehicles) he recommended a method to get a rose gold effect with a wash over Gold.
So that is the scheme I went with, naming my army the Order of the Emperor’s Light, creating my own lore, characters as well as being able to tie Celestine’s latest novel into the lore, I am happy to post it and show my work for far with it, if people are interested.

My 2 reserve armies are Orks, which was my main army before Battle Sisters came along and 9th killed them. Followed by a small army of Custodes.

My next project will be Blood Angels, and I plan on painting them in a metallic red scheme with a large portion of my army being Death Company (standard DC paint scheme), but work on them will be slow as I am still focused on my battle sisters.

So that’s a little about me.

If you would like to see more of my photos I plan on posting in the correct forums but here is a taste of what I’ve done so far, I hope you like them. 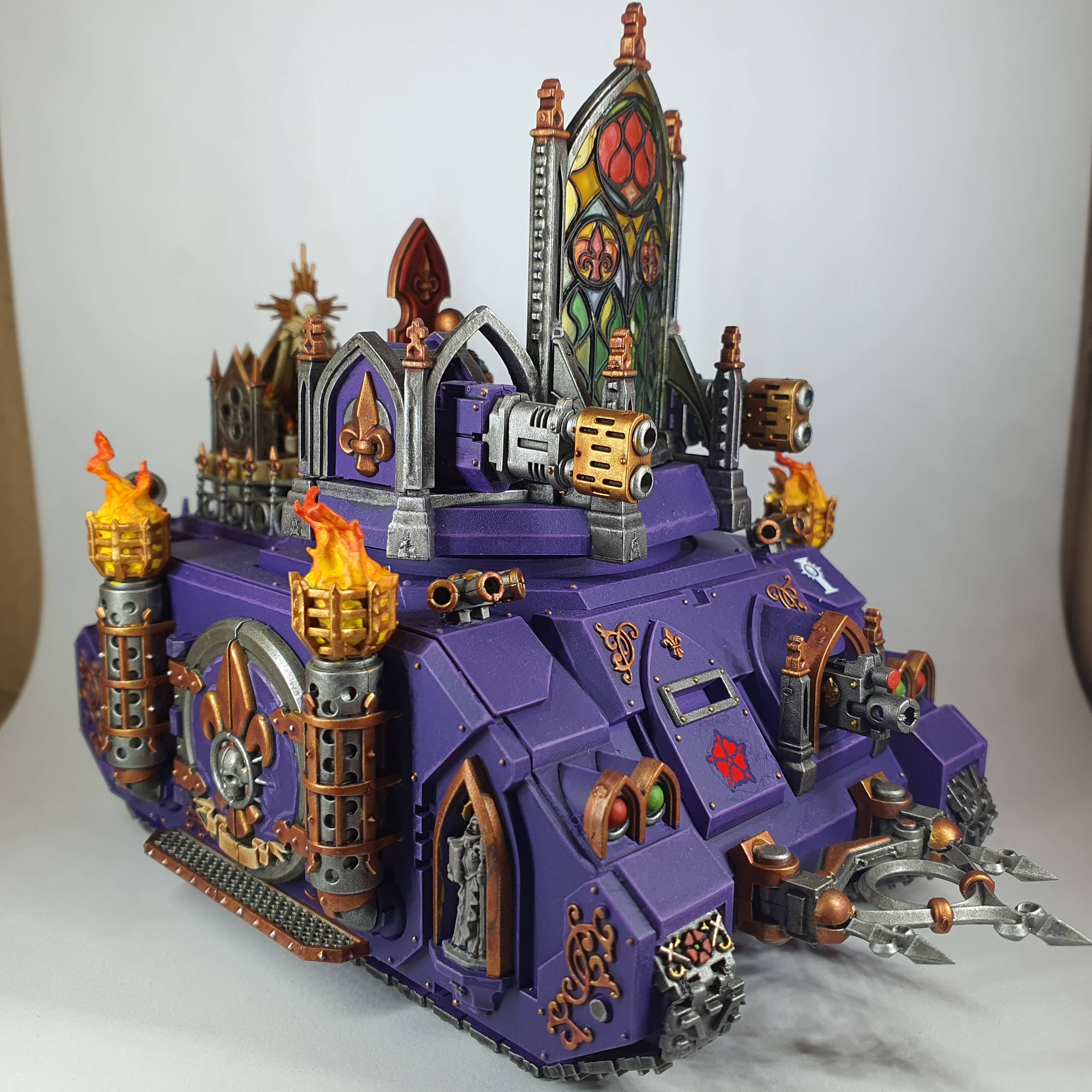 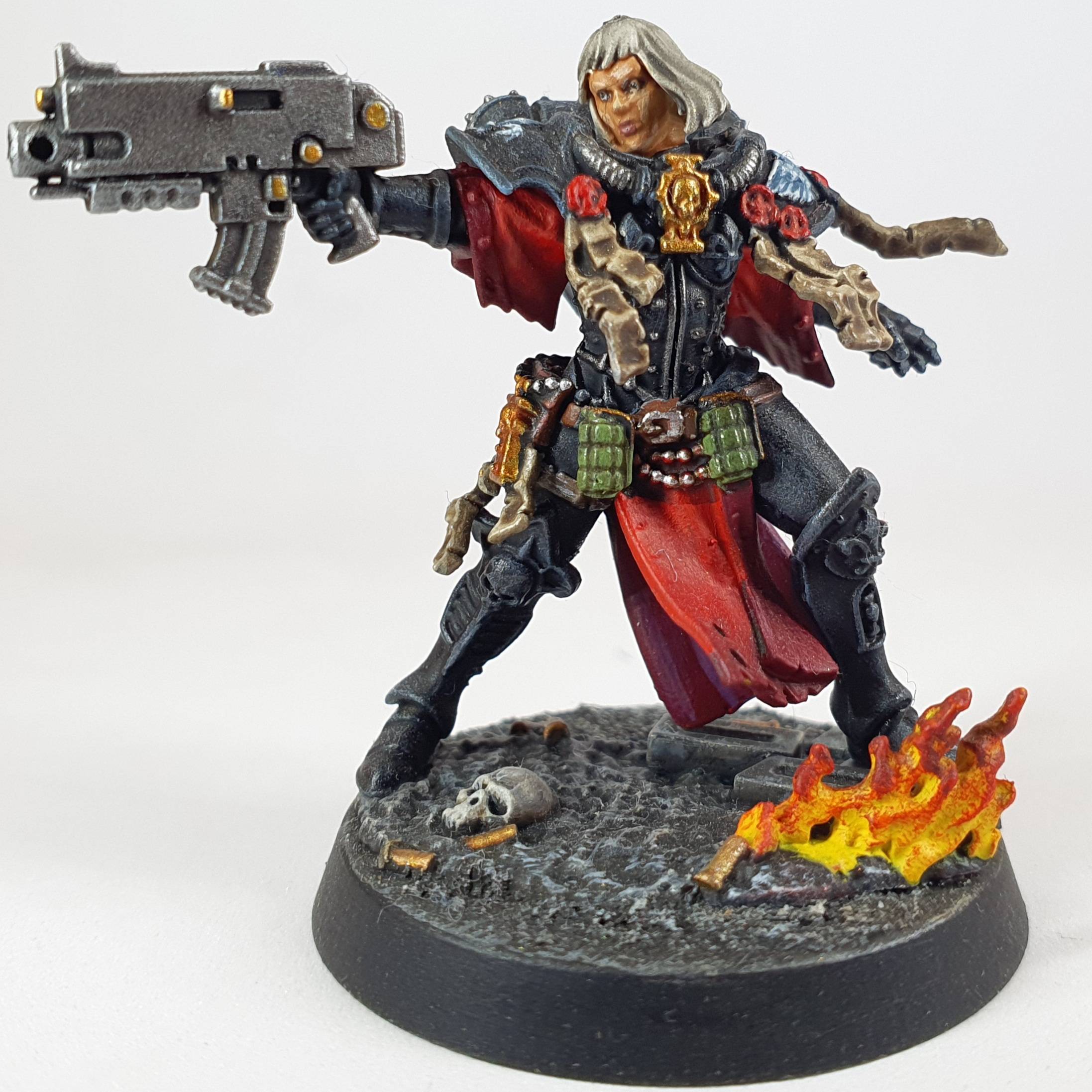 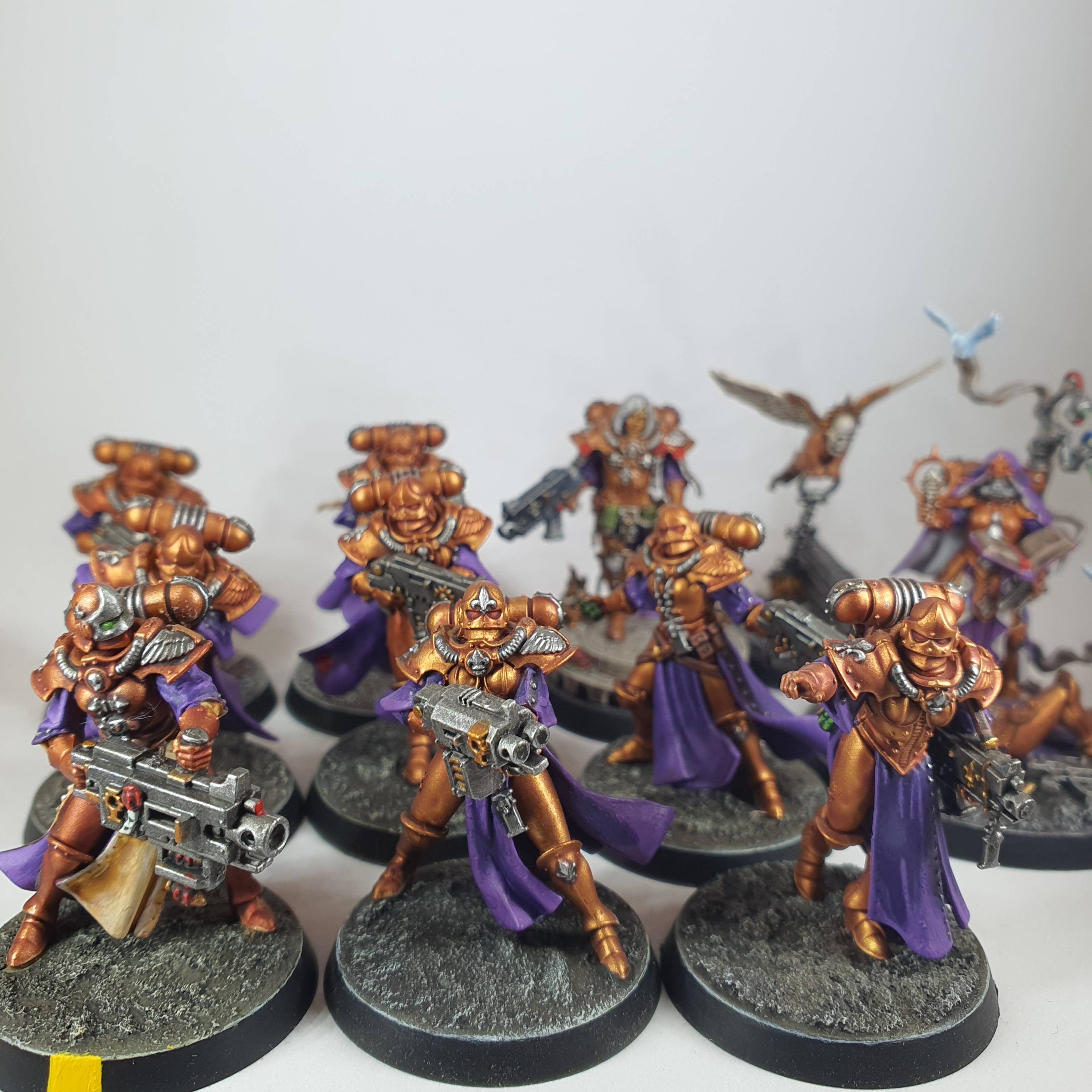 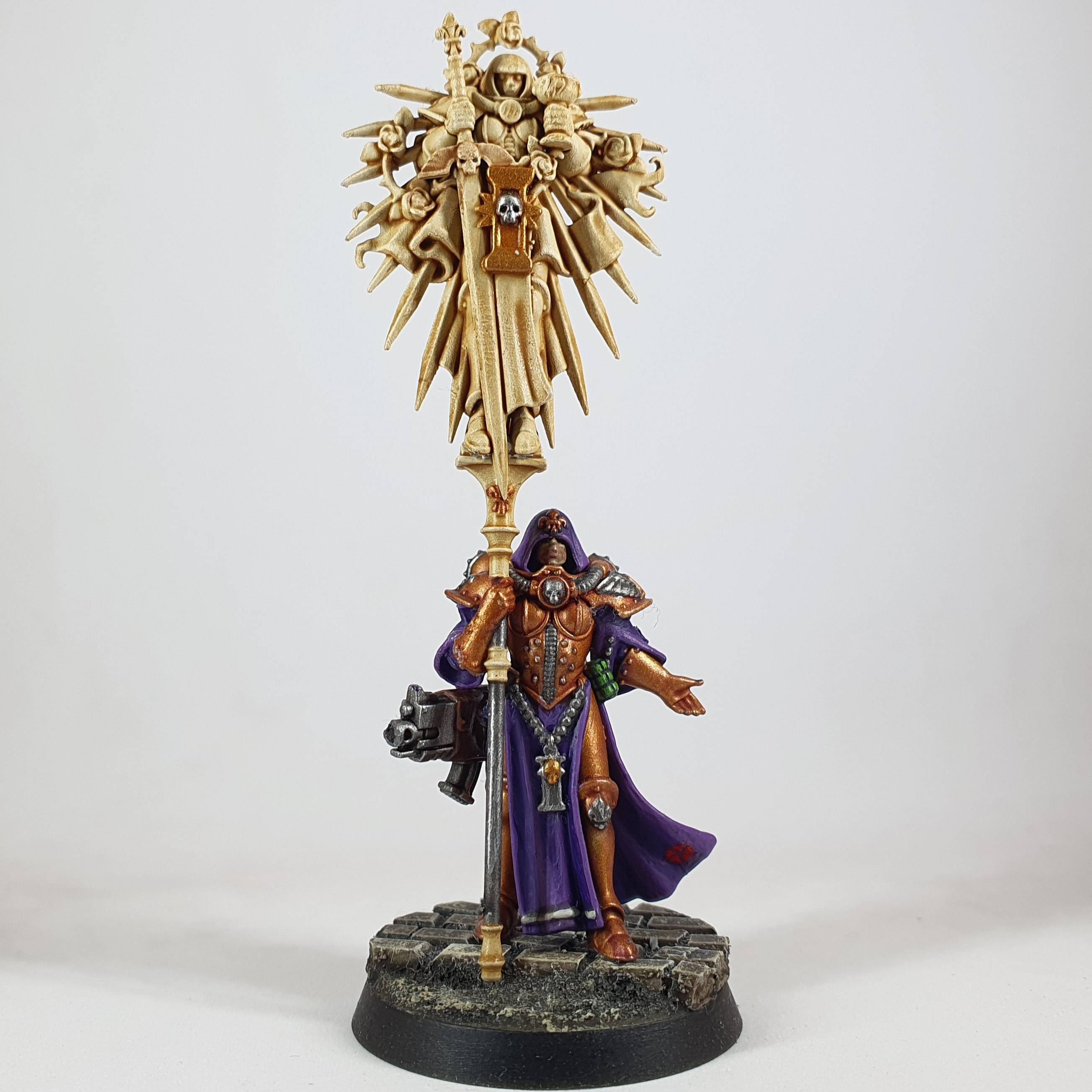 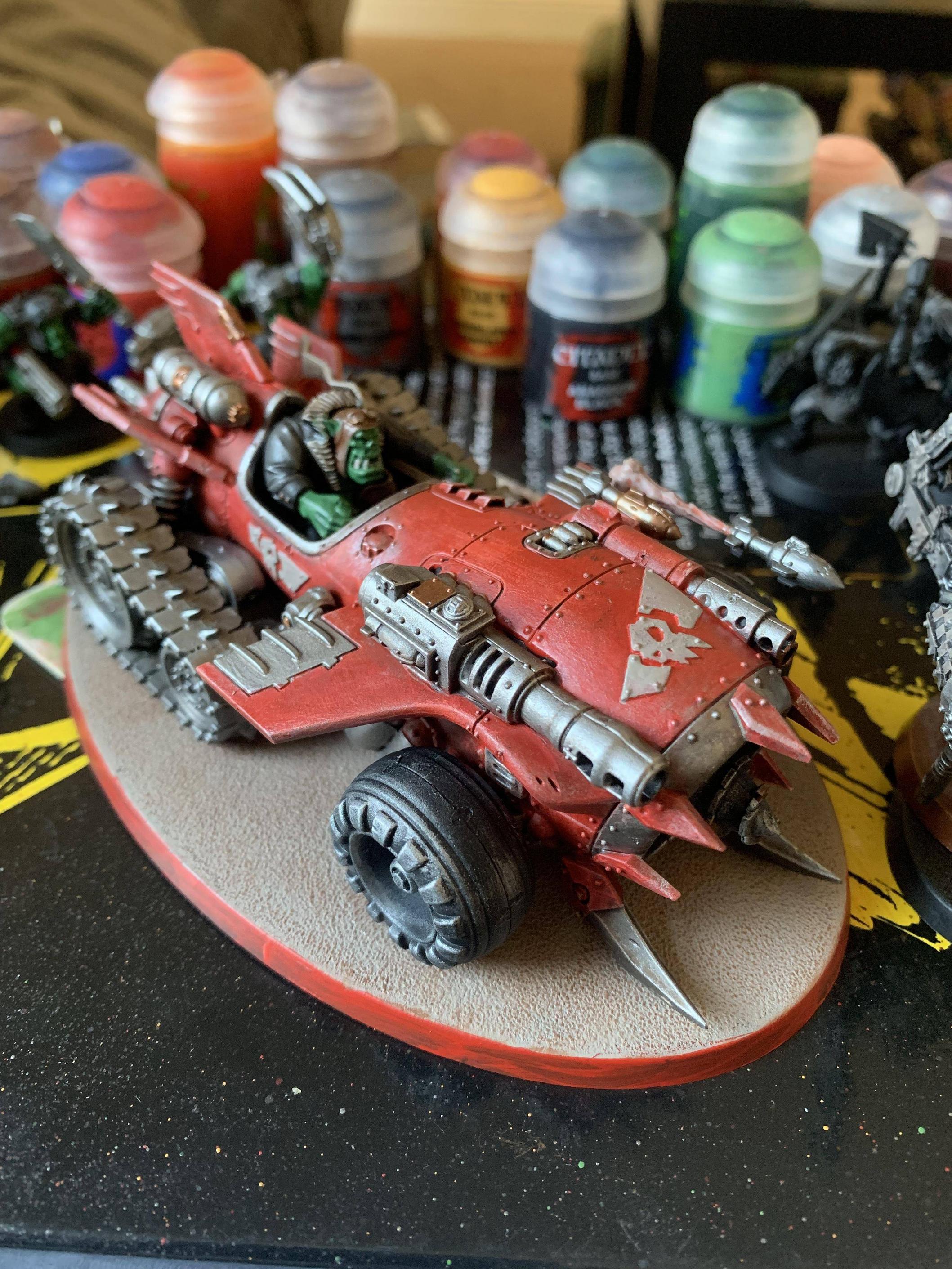 Stay safe guys, looks forward to chatting to you all!
DW1986 liked this

Would love to know the Bloody Rose story - I'm not particularly well-read where the Sisterhood are concerned. You're painting purple though, so you're absolutely fine in my book!

I'm sure you can work out where the photos want to go, but you are of course more than welcome to post your lore up in the Sororitas forum, too.

You've actually made me realise that while your profile is happy to take Twitter, Facebook and YouTube links there's no default field for Instagram, so I've added it to my list of things to do! (speaking of which, the board is mostly built but I'm still sorting final bits, so don't be surprised if things temporarily stop working from time to time!) You might find that Instagram links auto-embed in posts, but if in doubt posting images directly (either in [img] tags or via upload) will always work best - we can zoom in then!

ldubya344 liked this
Paying full price for your models, paints and tools? Don't!
Use our banners after the first post or at the bottom of the page for 22% off RRP, and 25% off pre-orders!

Some fantastic paint work there. I think the tank is pretty fantastic

Likewise know zip all about sisters lore at all. So please start flooding the currently empty adeptus sororitas board

@pawl that correct?
ldubya344 liked this

11 Feb 21, 22:16
Yeah, of course! My post wasn't overly clear, sorry!
Do be aware though that Instagram limits content viewing for those that aren't signed in (like myself - don't have an account), so if links don't auto embed (see here for an example of Twitter auto-embedded by just posting the link) then it might be best to post directly to the board like you already have. =]
James, ldubya344 liked this
Paying full price for your models, paints and tools? Don't!
Use our banners after the first post or at the bottom of the page for 22% off RRP, and 25% off pre-orders!

good to have you on the forum mate

Also thank you for allowing myself to share my Instagram photos. Just so everyone is aware, I do not plan on posting links to insta.
I will use this forum to share photos of my painting and only plan to add a link to my insta profile in my signature.

I also plan on filling out the adepta sororitas section with plenty of information. Anything I absorb, I will share on there!

13 Feb 21, 17:44
All is good buddy, don't you worry! =]
If you click my avatar you'll see buttons in the pop-up for things like Twitter - I'll get around to making a profile field so you have a proper place for an Instagram link. =]

You to for it! I was hoping @James would do it for me but he sold his Sisters instead!

They had to go