For all things relating to tabletop warfare.
Reply
Share

So @Badger_of_doom has been keen to start a crusade game for a few weeks and we've finally got ourselves up to speed with how it works.

In a nut shell, crusade mode is a way of playing 40k but creating more of a story and uniqueness to your army and units by gathering experience and upgrades and doing different missions using the same force. (Im looking forward to us being abit more attached and invested in our guys and less just building the most optimum army)

We've also both been super nerds and gone out and got mugged off by GW to buy their Crusade Journal to track our armies. Pictures to follow.

Rough guidelines of the crusade will be initially create a force of 50 power level (PL) and then we will do 25 PL battles (selecting what units we wish to use in that particular skirmish from the larger force).
After an agreed number of battles we we will increase our overall number of PL and the PL size for the battles. I think we will be rolling 2 dice for battle honours instead of 1 so less chance of getting a useless upgrade for your unit. (@Badger_of_doom are we thinking reroll one dice if you get a double?)

I think we will both post our first crusade forces on here tomorrow in place for Monday and the first game (maybe two) of the crusade.

N.b. i think we've agreed to boycott OP units like eradicators and contemptors until we have larger armies. This way it'll hopefully allow the game and armies to be fluffy and less competitive list buildy. 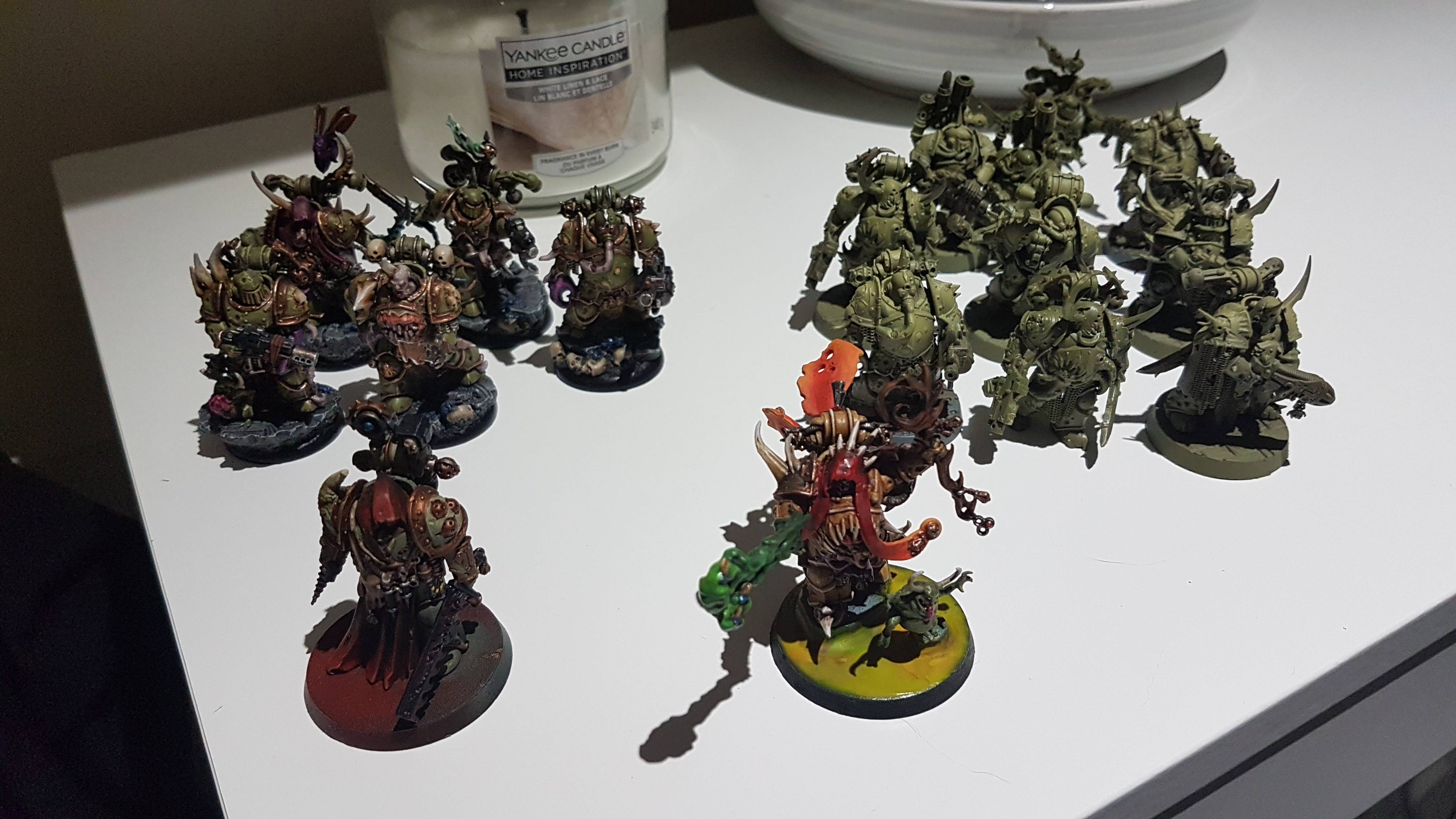 Led by Rask the chosen, the plague surgeon and Phleggan Foultouch, the plaguecaster. We have two units of plague marines the larger unit named 'the repulsive', the smaller named 'the unsightly'.

Going for a heavy infantry force to begin with. Im only filling 25PL of the potential 50PL to begin with.
Backstory for these guys:

"Rask the chosen" has spent many years studying under the tutelage of Fabius Bile. He has learnt new techniques to improve upon the emperor's design and new ways to improve upon papa nurgle's diseases. Rask has now called upon his old brother in arms, the sorcerer "Phleggan Foultouch". Upon receiving the comms from Rask, Phleggan immediately fled with his closest plague marine bodyguards. The promise of improved strength, new tocsins and diseases proving too powerful to resist.
The new union of Phleggan and Rask plan to slowly and secretly bring more death guard and daemonic allies to their cause before they try to challenge Typhus himself as Dear Grandfathers favoured champion. 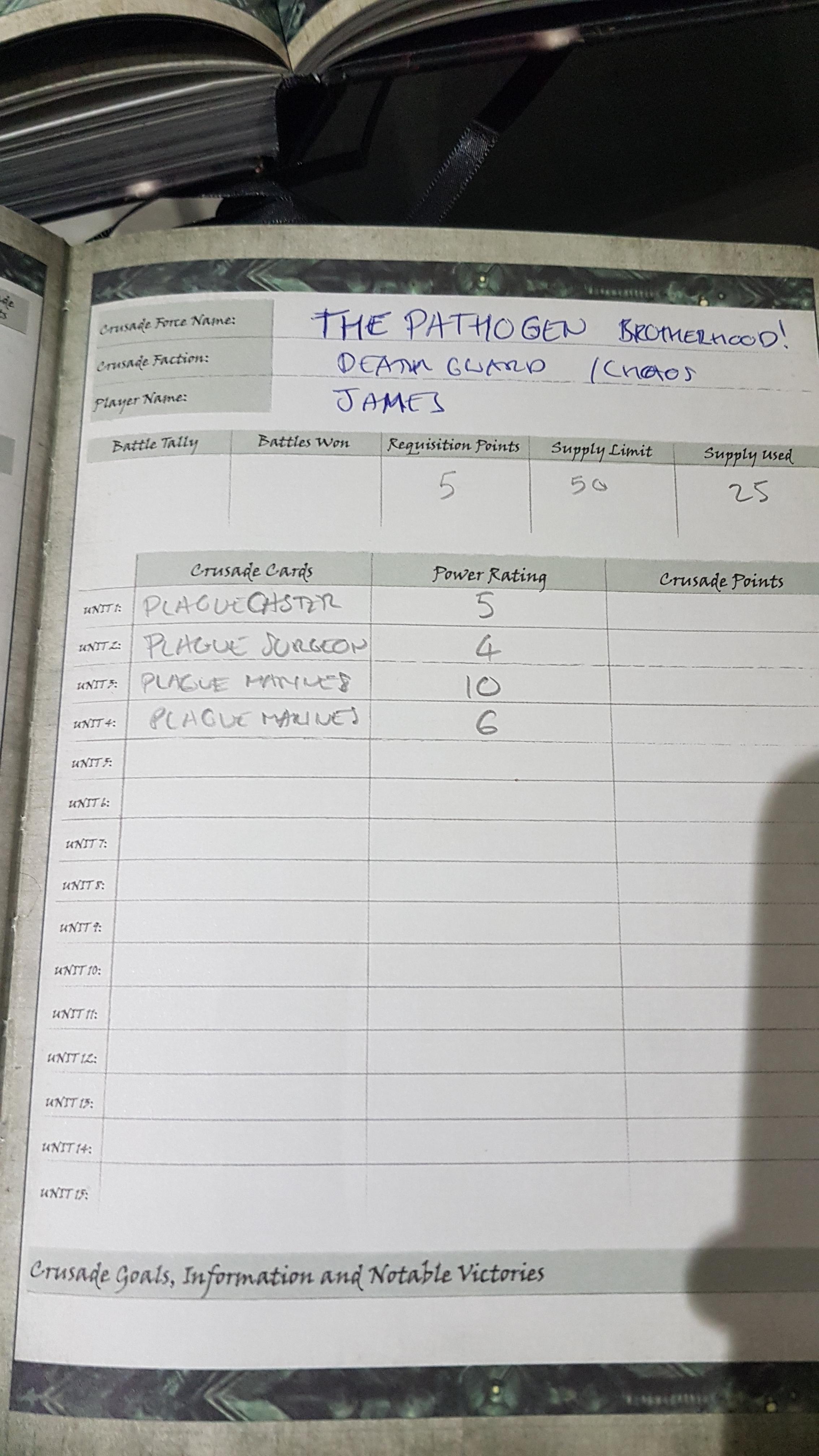 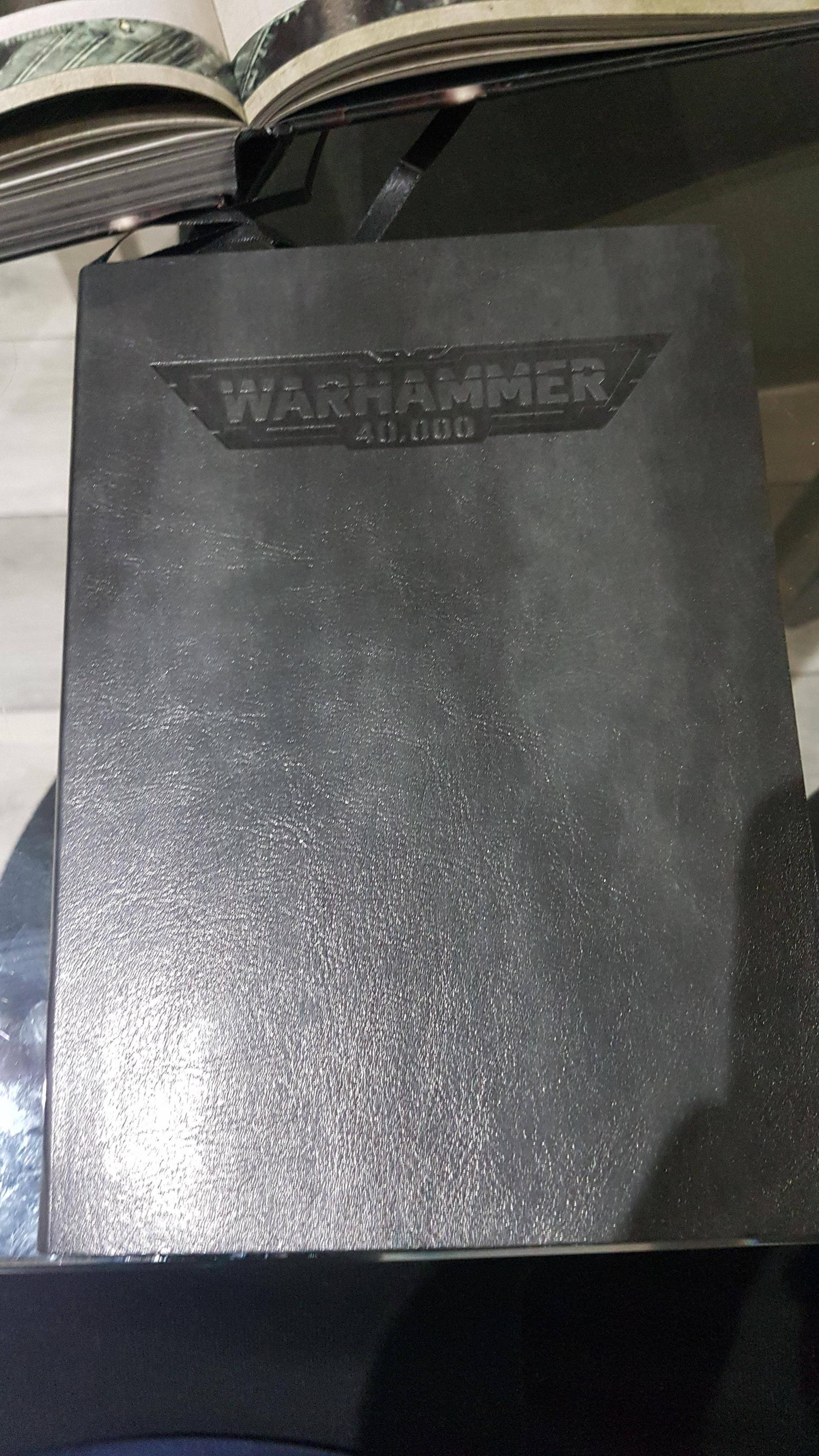 I plan to spend 3 RP to upgrade Rask and Phleggan. Rask will receive hypertoxic tinctures. Phleggan will recieve the daemons favour relic and a strategem for the sevenfold blessing.
Badger_of_doom liked this

Here they are the elite fighting force known as the "Deadly Badgers" a close knit band of warriors said to be feared by all even the emperor himself. Known for their will to ensure the emperor's will is done. They are easily identified by the black and white striped monitor usually on their helmet (to be added soon) 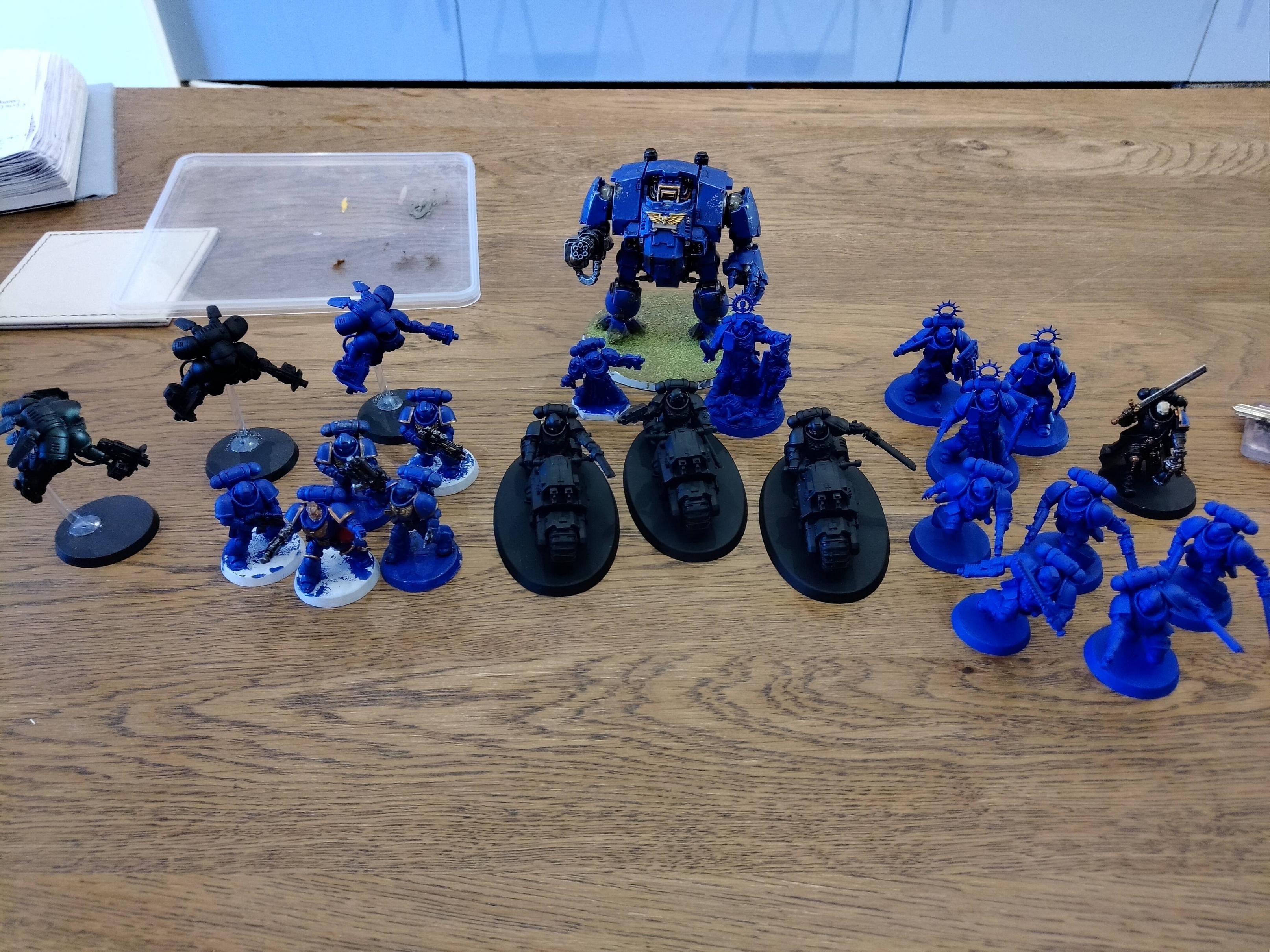 Led by the primaris captain (indomitus) know as the "Badger of Doom" he is set on removing chaos from the universe and spreading the virtue of the Imperium. He is a "paragon of war" and gifted by the emporer with a "Sanctic Halo". He has 3+ invulnerable save and the ability to deny the witch. He also shows his immense power by ensuring that any wound roll of 6 inflicts a mortal wound to their enemy 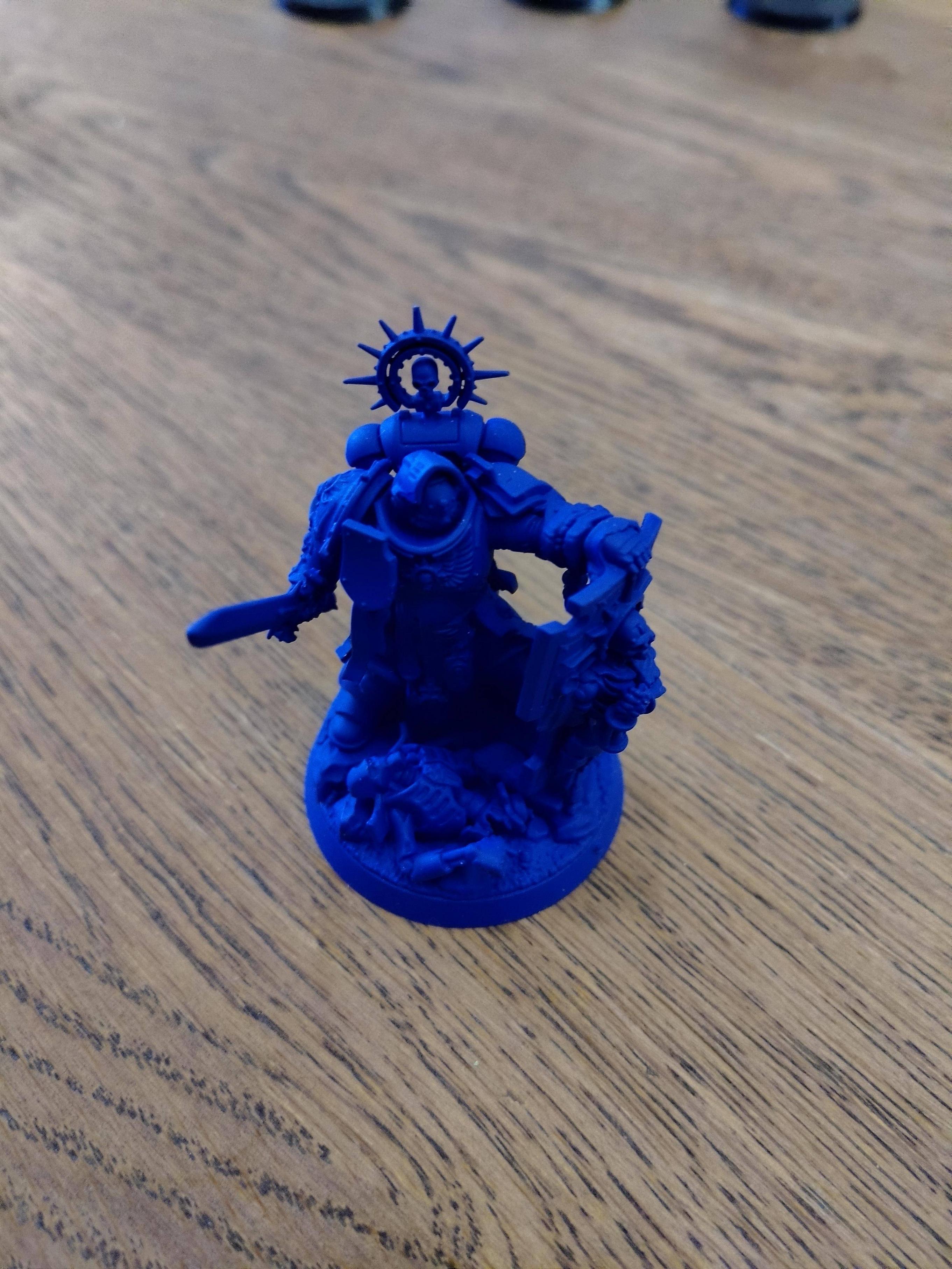 BoD seems a cool guy, Rask will enjoy subverting him to nurgle in due course.
Where was this new miniature you got? Hanging back still 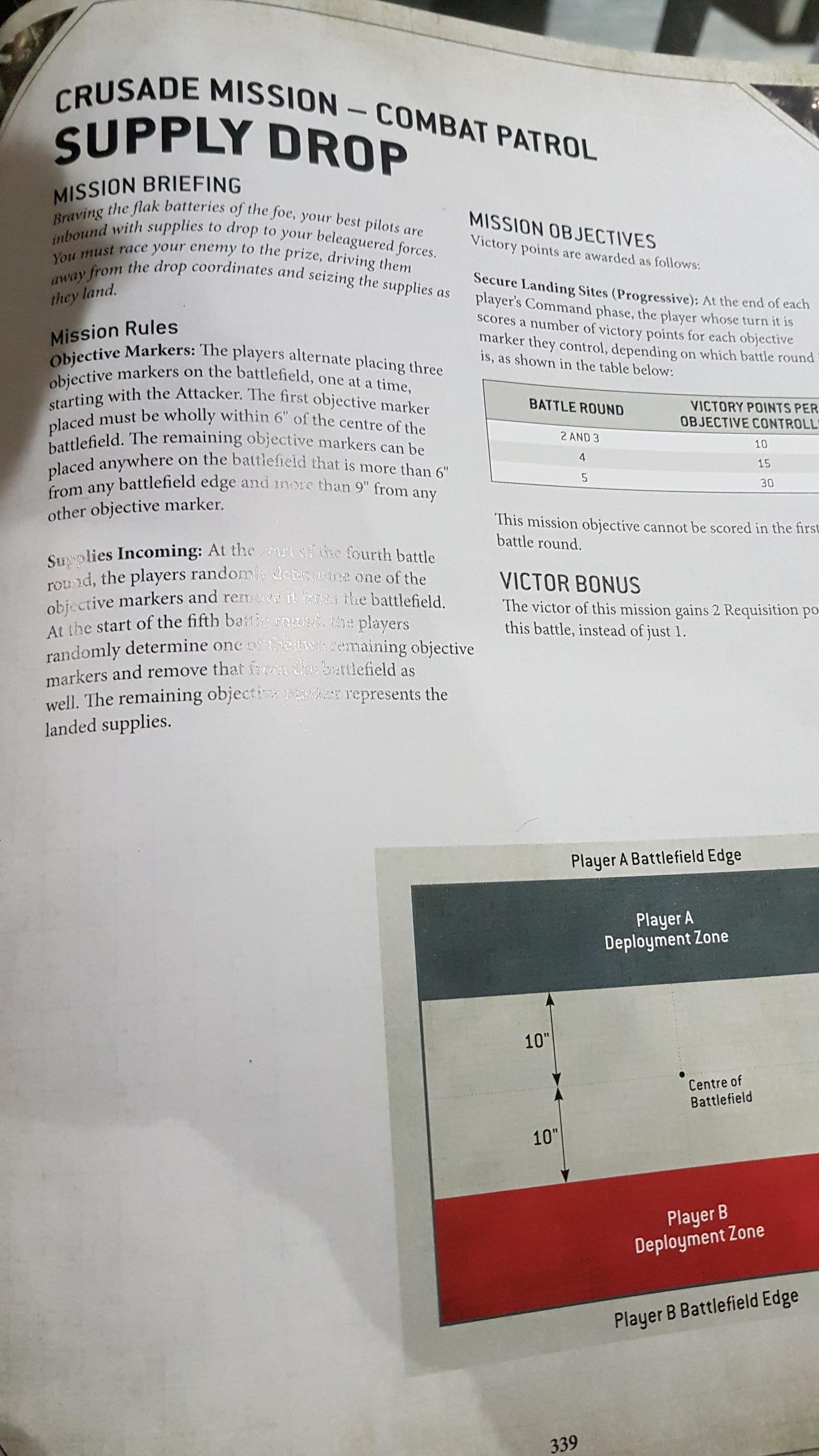 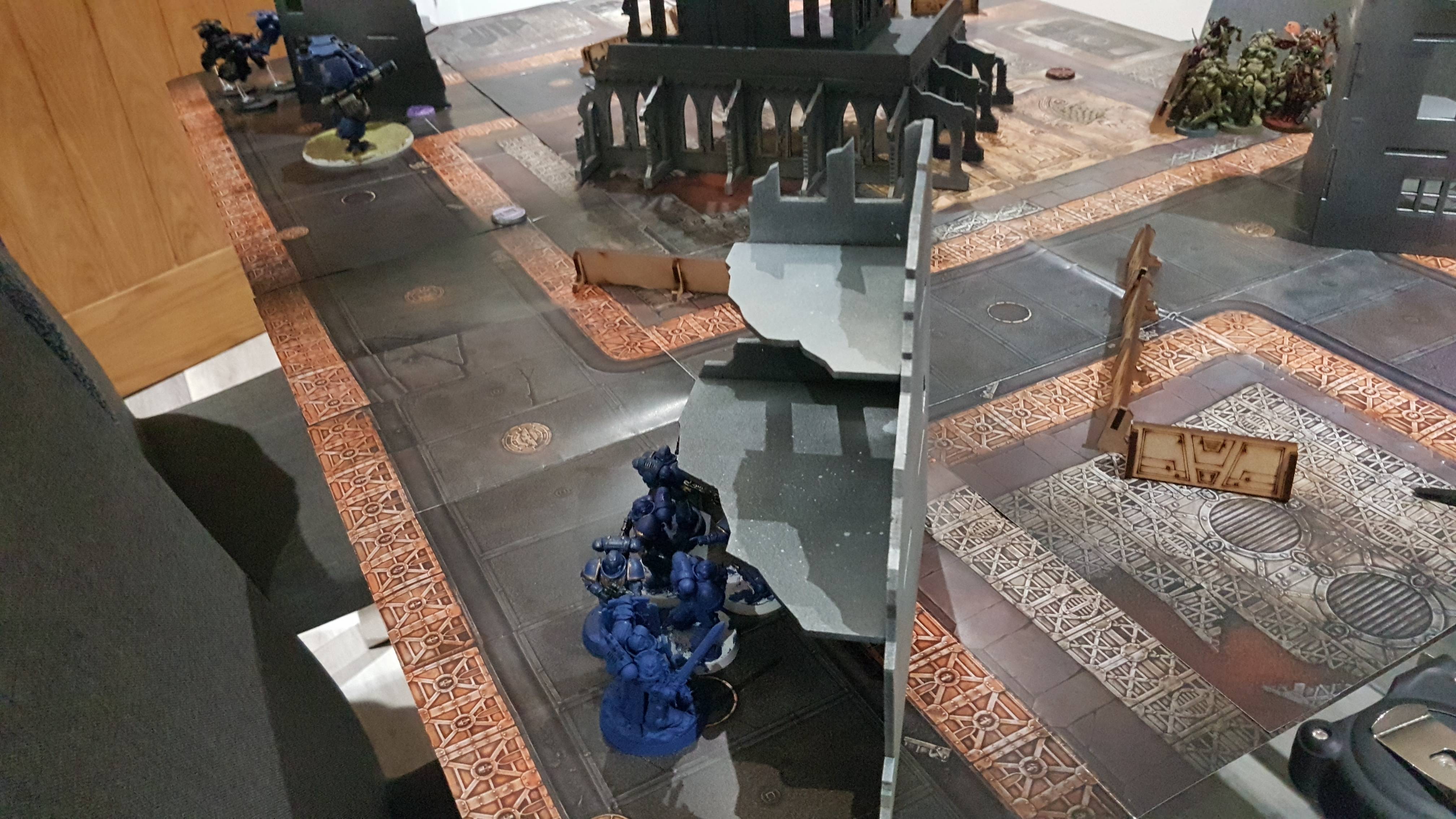 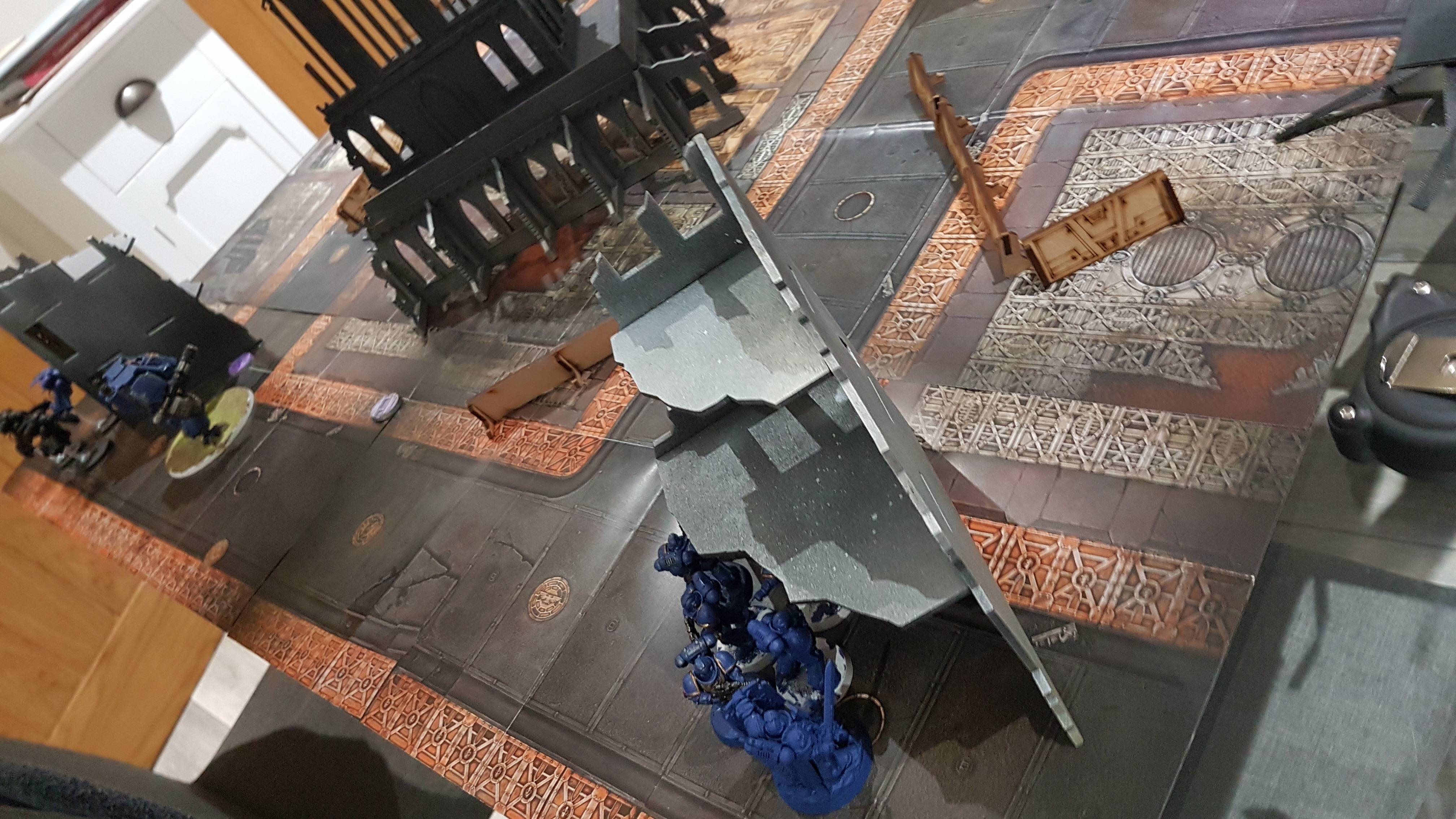 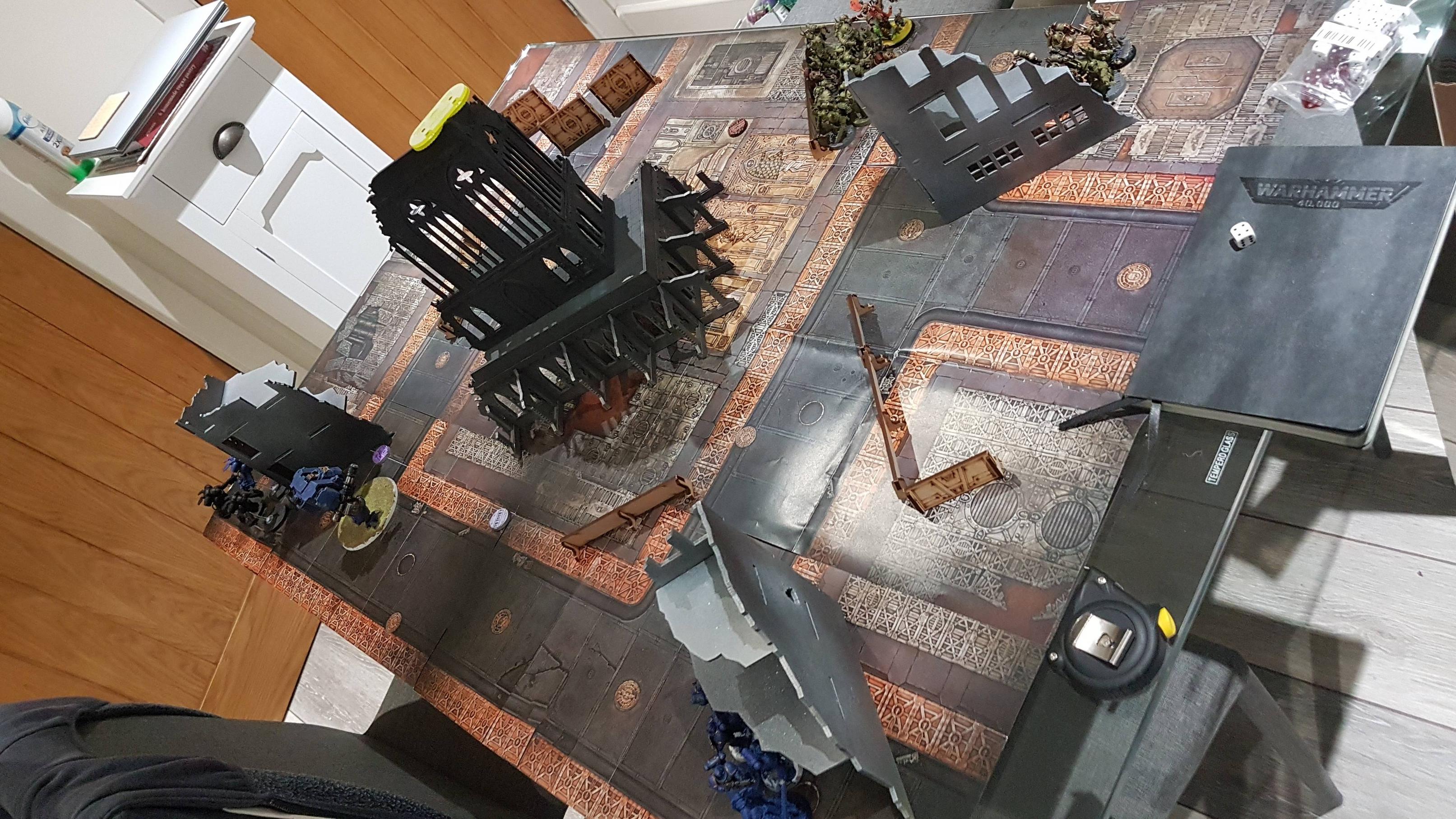 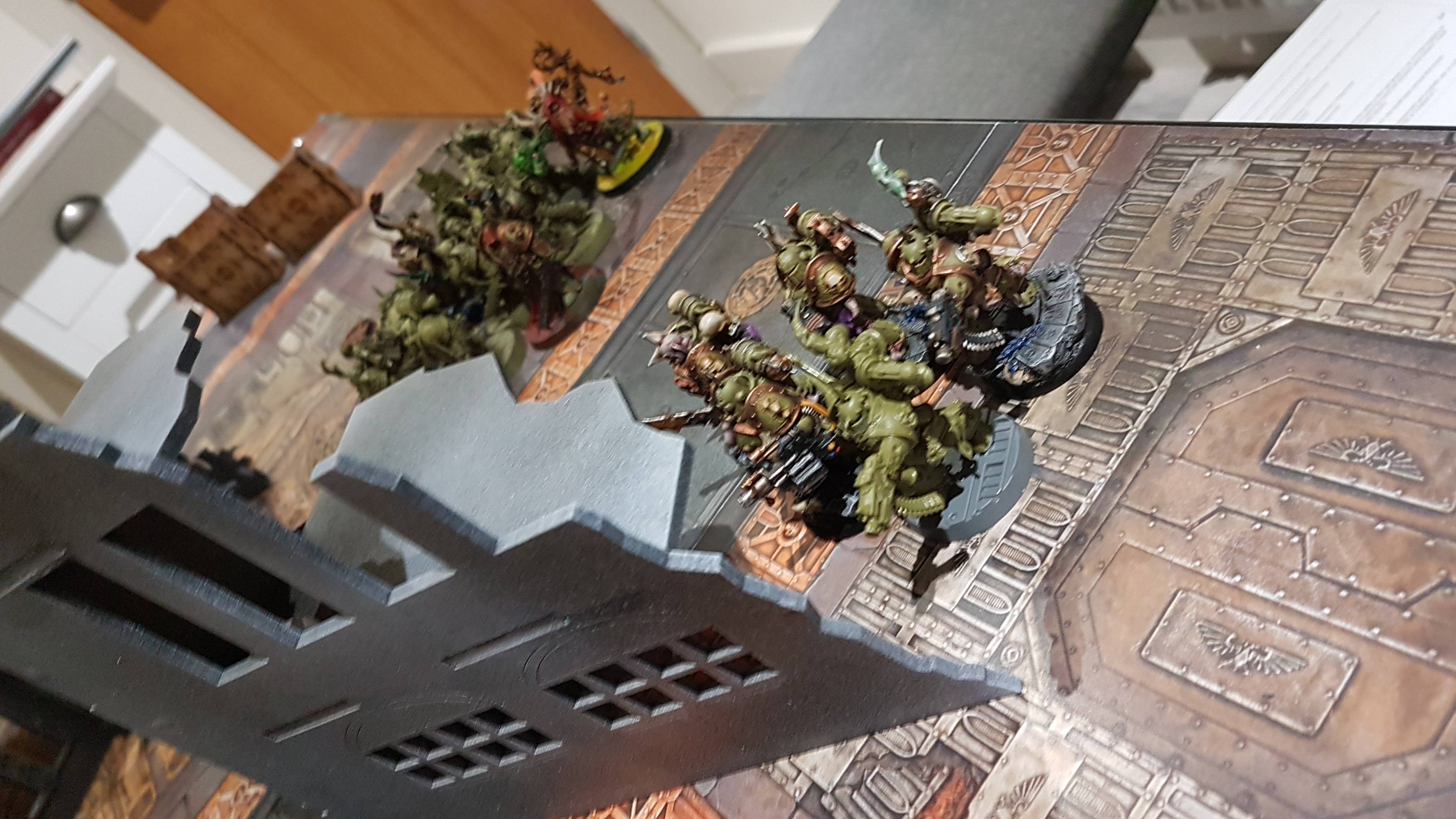 Board looking good as i managed to get the rattle cans out on the ruins. And i built the barricades this evening too to add an extra element to the game.

Death guard rolled to win which side to take. But ultramarines won the roll to decide who goes first and decided to take the first turn.
1st turn definitely fell in Dg favour with plague marines taking out several intercessors and losing only 1 plague marine.
2nd turn.. @Badger_of_doom missed his movement by playing his orbital bombardment strategy before doing his movement. I was abit of douche about it but it's a typical OP space marine strategy so i feel abit less guilty about it and we did roll off to see if he could do the movement but failed the roll off.
This significantly affected play as it meant his redemptor could not charge or shoot as effectively as it could have. I think one plague marine or two were killed that round.
Dg turn 2. Plague marines and psyker make it into the middle building and put a lot of wounds onto the redemptor using strategems to make bolt weapons plague weapons and the surgeon granting extra rerollls. Then the PMs made their charge roll and took out the final wound or so with the flail of corruption. Which is really powerful. 10vp each at end of the round.
Turn 3. Badgers make a brave but strong move and charge the now exposed PMs. 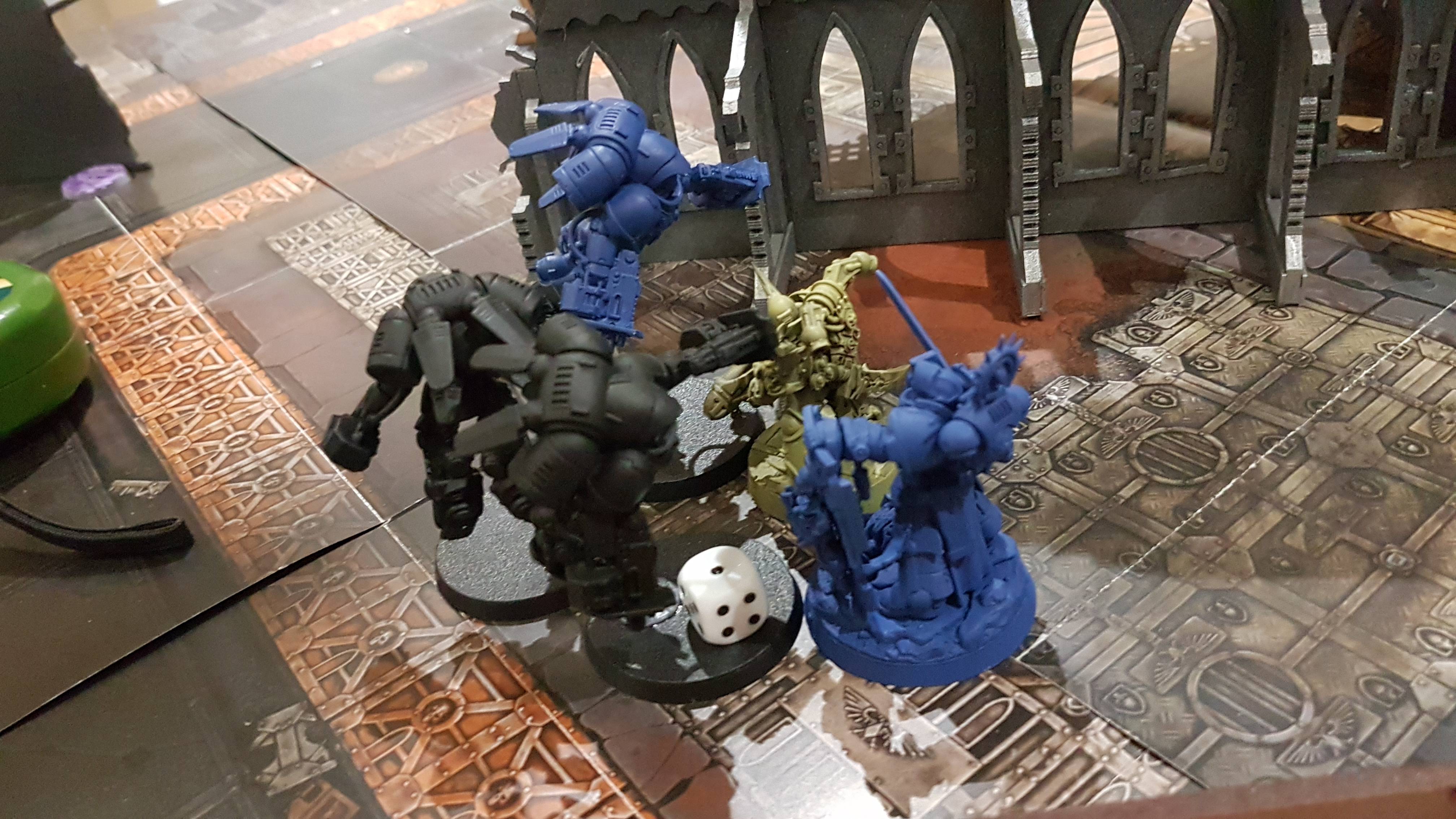 Not many survive the onslaught!!! Surprised any survived to be honest. Humped by inceptors, captain and remaining intercessors.
They managed to take out the intercessors on their fight back tho.
Turn 3 for dg, pm retreats to allow others to fire into combat. Big turning point indomitus captain saving 4 of 6 smite wounds from the psyker. Not much else damage caused by dg that round. (10vp each for one objective each)

Turn 4
Roll forobjective and middle objective dissapears.
Captain moves up the board and takes a pot shot at the last plague marine and somehow makes it!! Takes out the last guy.
Inceptors go back to take the objective point but started the turn with no objectives so no VP.
Indomitus captain then makes the charge into the psyker and kills for Phleggan Foultouch.
Dg turn tries to attack back but not happens but they hold the objective. (0vp V 15vp for death guard)
Turn 5. Unlucky for ultras but the last objective dissapears from there deployment. Meaning they cannot win at this point.
Inceptors charge over and help the captain finish the plague surgeon. But the last plague marine of squad 'the unsightly' hangs on to claim the objective and get another 30vp.
Score 20vp v 35/65vp we weren't sure if the last point was contested or not.

After battle admin. Only the plague surgeon failed his out of action roll so lost his xp for the battle.
Phleggan the psyker succeeded his agenda of lord of the warp and i selected him as my mark of greatness so he levelled up to bloodied. I rolled for his psychic fortitude and unfortunately didnt get the one i wanted but gets one extra known psyker power.
Badgers have tactically made it so that they will have multiple units get to blooded rank next battle.
@Badger_of_doom got some good pics so will hopefully upload later.
Really close battle and i think really one roll secured and that was for the ultras objective disappearing.
I think I will need to play a more competitive list in future. The wound total difference was around 50% which is just too much. Around 23 wounds to i think 32 for space marines. Pretty vast difference at those small numbers. If the firstborn upgrades to wounds happens with no negatives this would be closer.
Badger_of_doom liked this

05 Oct 20, 00:35
@Badger_of_doom you going to put on the better pics you got?
Also we need to have a think about how we deal with any changes that happen due to codex changes... in terms of power level etc. If say something increases or decreases in power level due to changes?
My feeling would be.. we amend our rosters to match the PL rather than sticking with old costs. So if one of our guys increases by 1 PL. We add 1 PL to his cost in the army sheet and 1 to the army total PL. And opposite way round if they go down. Probably unlikely to change tho.
Badger_of_doom liked this

27 Oct 20, 21:05
After the humiliation of defeat at the hands of the death Gaurd whilst trying to find much-needed supplies. the bloodied and war-torn Deadly Badgers regrouped and took account of their unacceptable failure in battle.

After being reprimanded for his stupidity by Captain Badger Of Doom the "Nasty Nipper" for walking into a Death Guard ambush. "Nasty Nipper" the Redemptor Dreadnaught was branded a DEADnaught by his kinsman 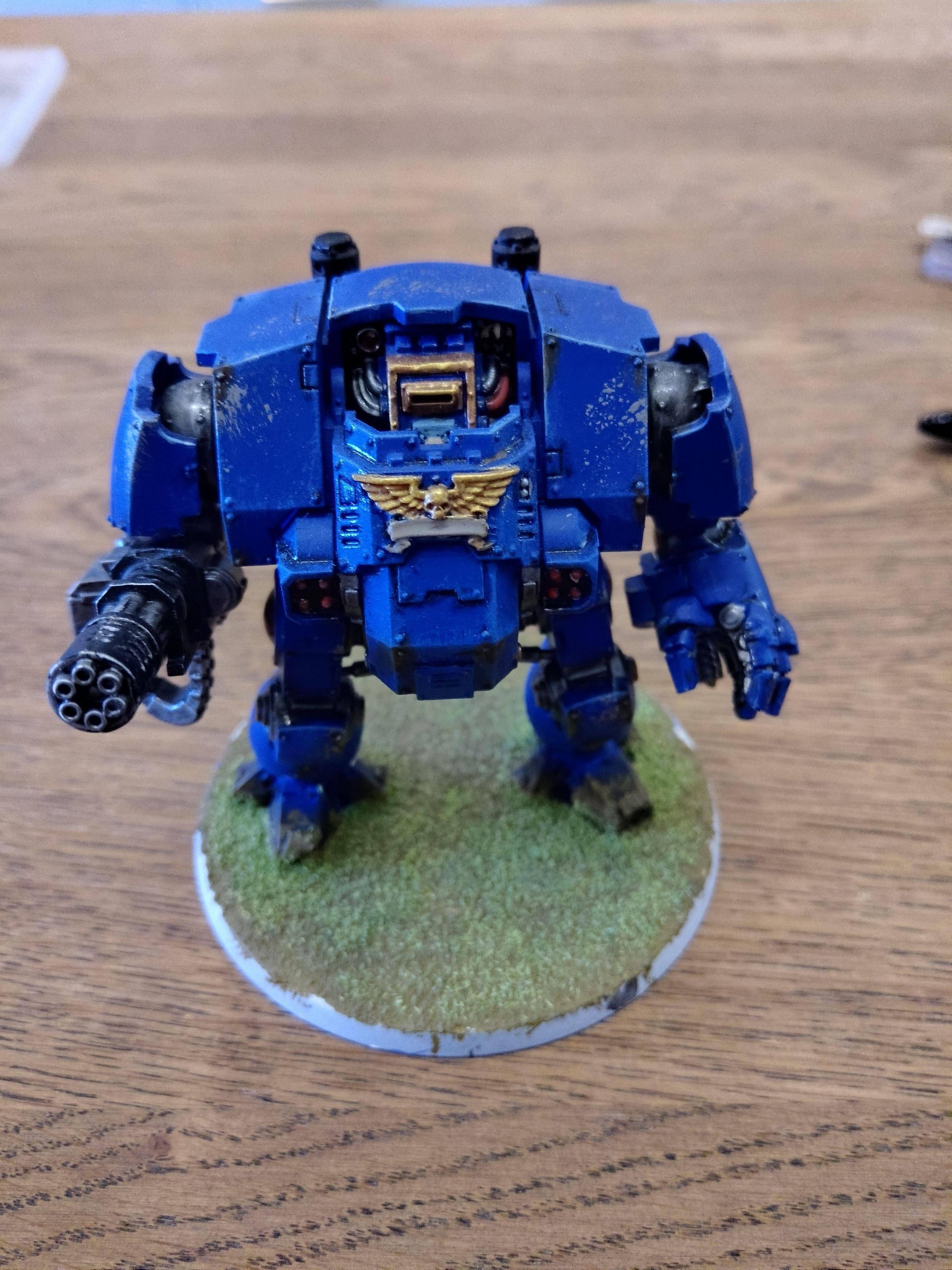 however along with his intercessor brothers, one of the last 2 remaining units of the "Forgotten five hundred" who were also among our fallen brothers in battle 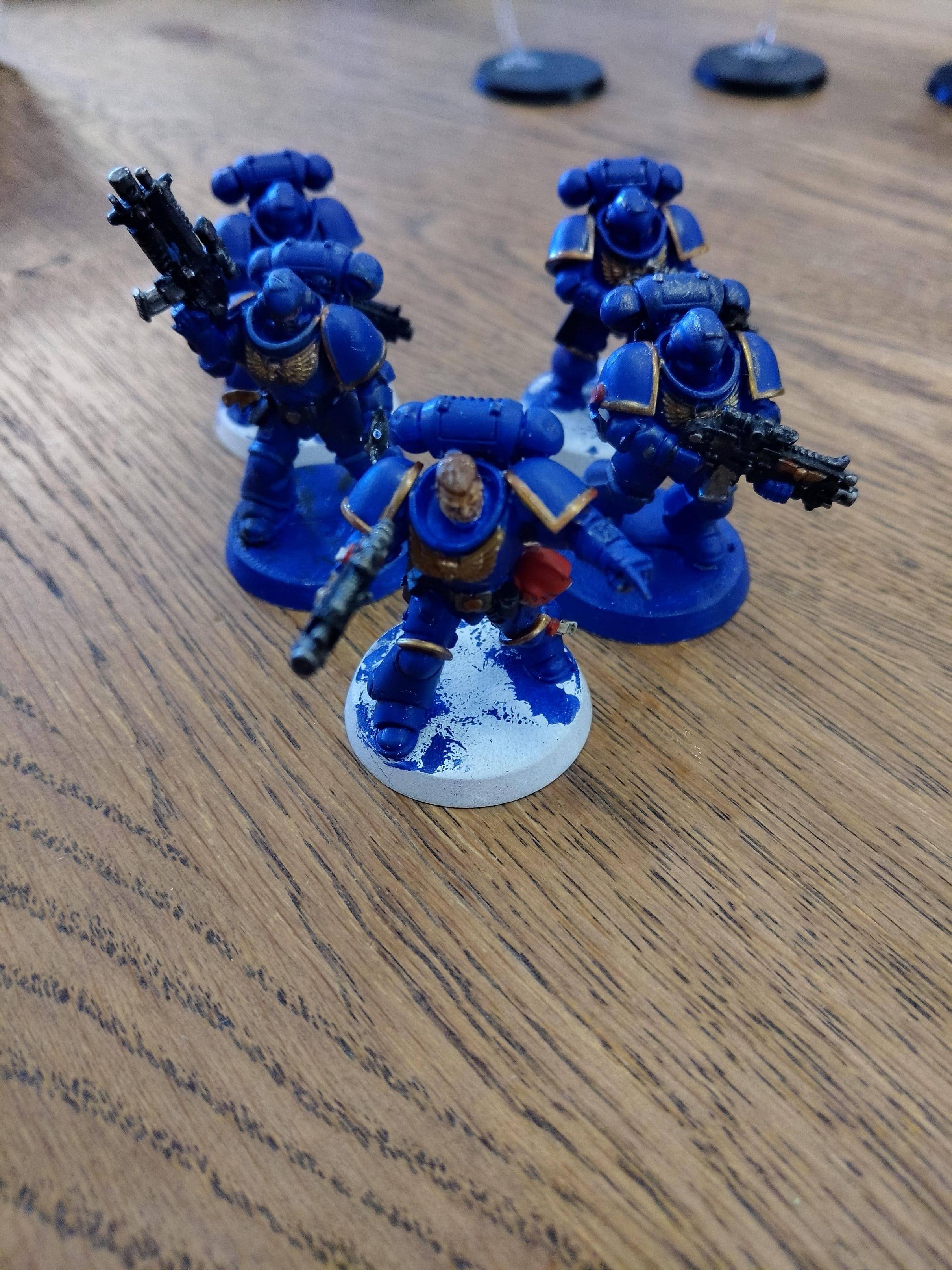 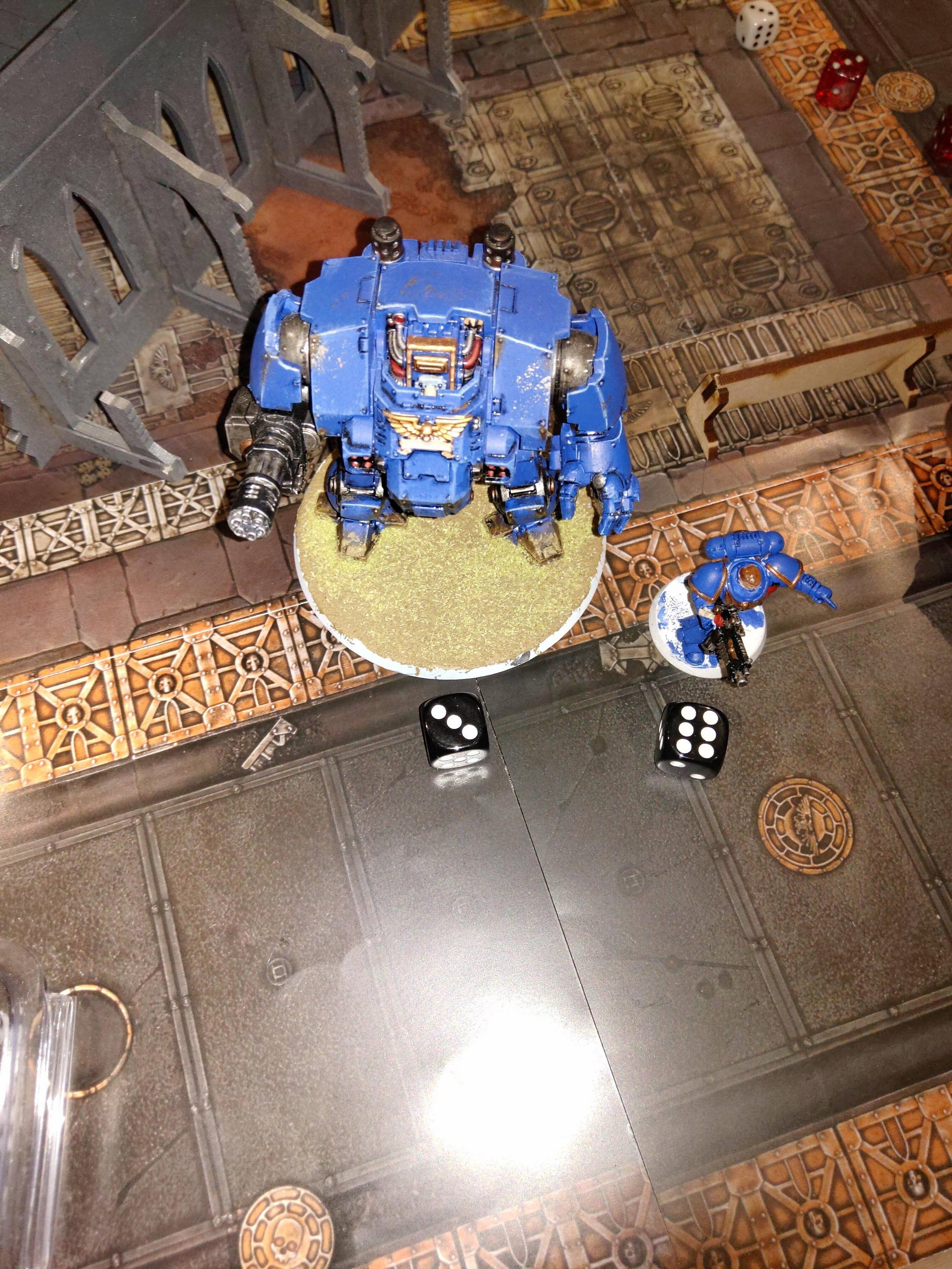 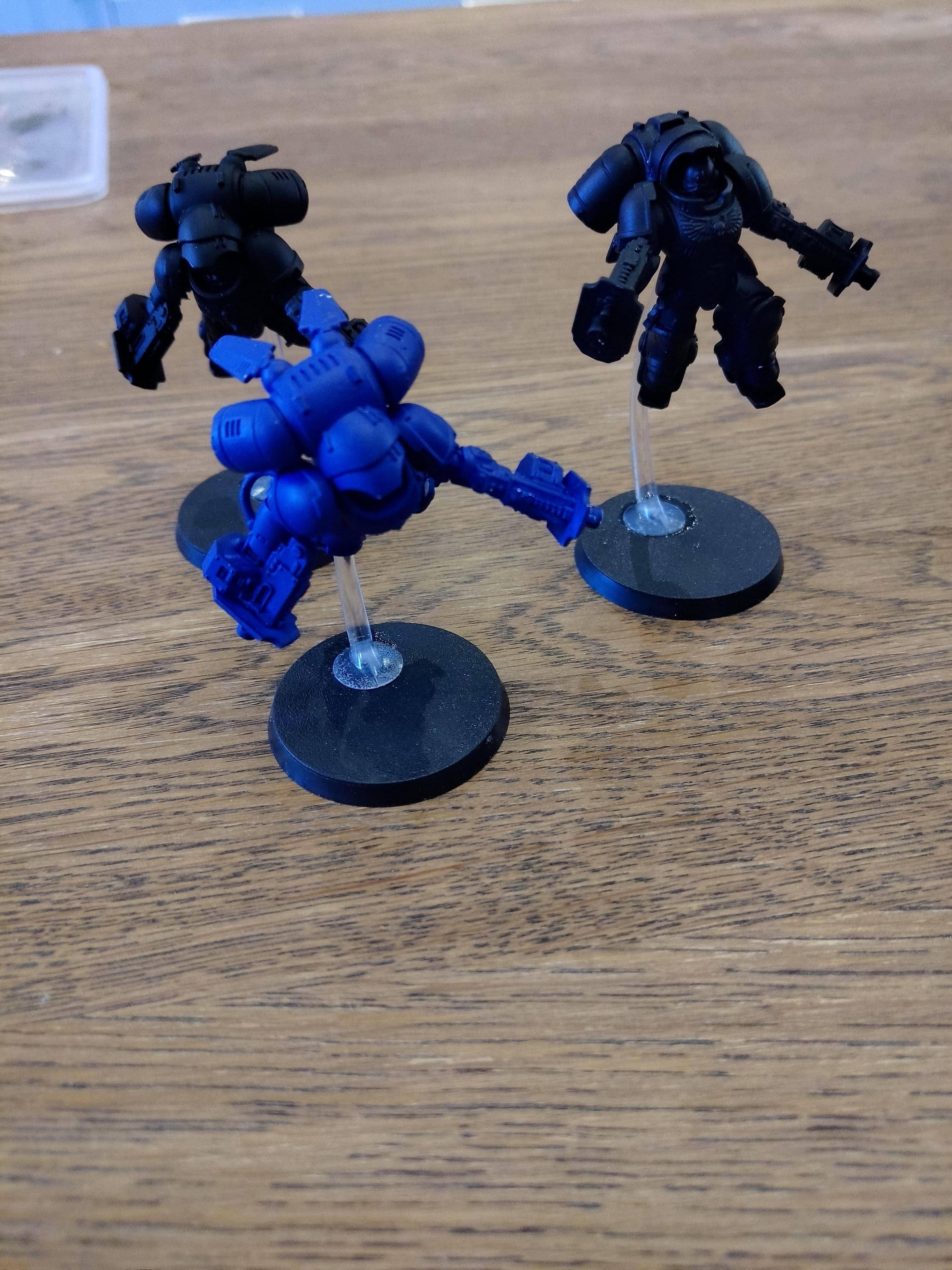 were disappointed to hear that the battle honors were passed to the "Forgotten 500" unit of intercessors. but the deadly badgers sat down together to reminisce the glories of the battle. 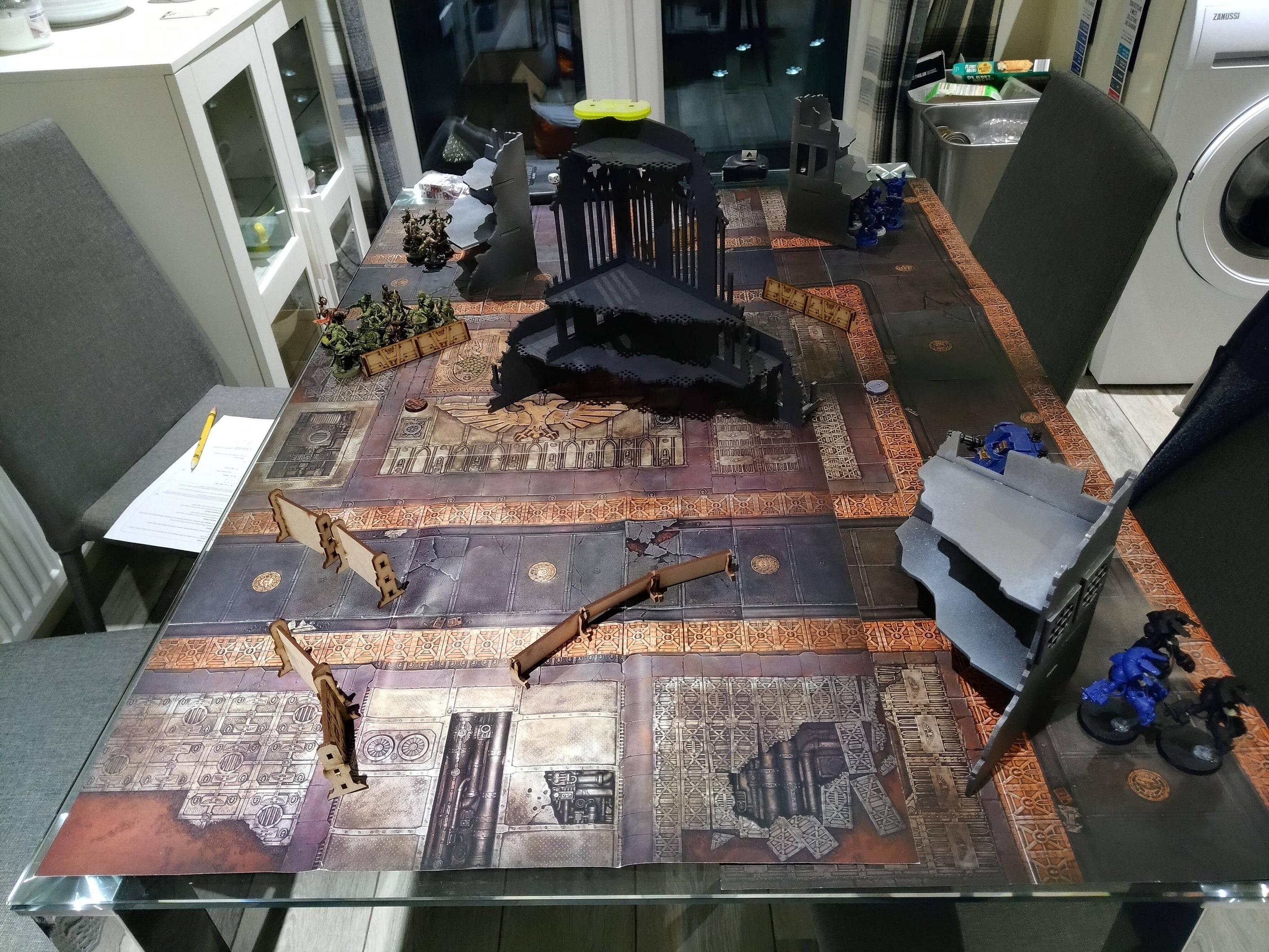 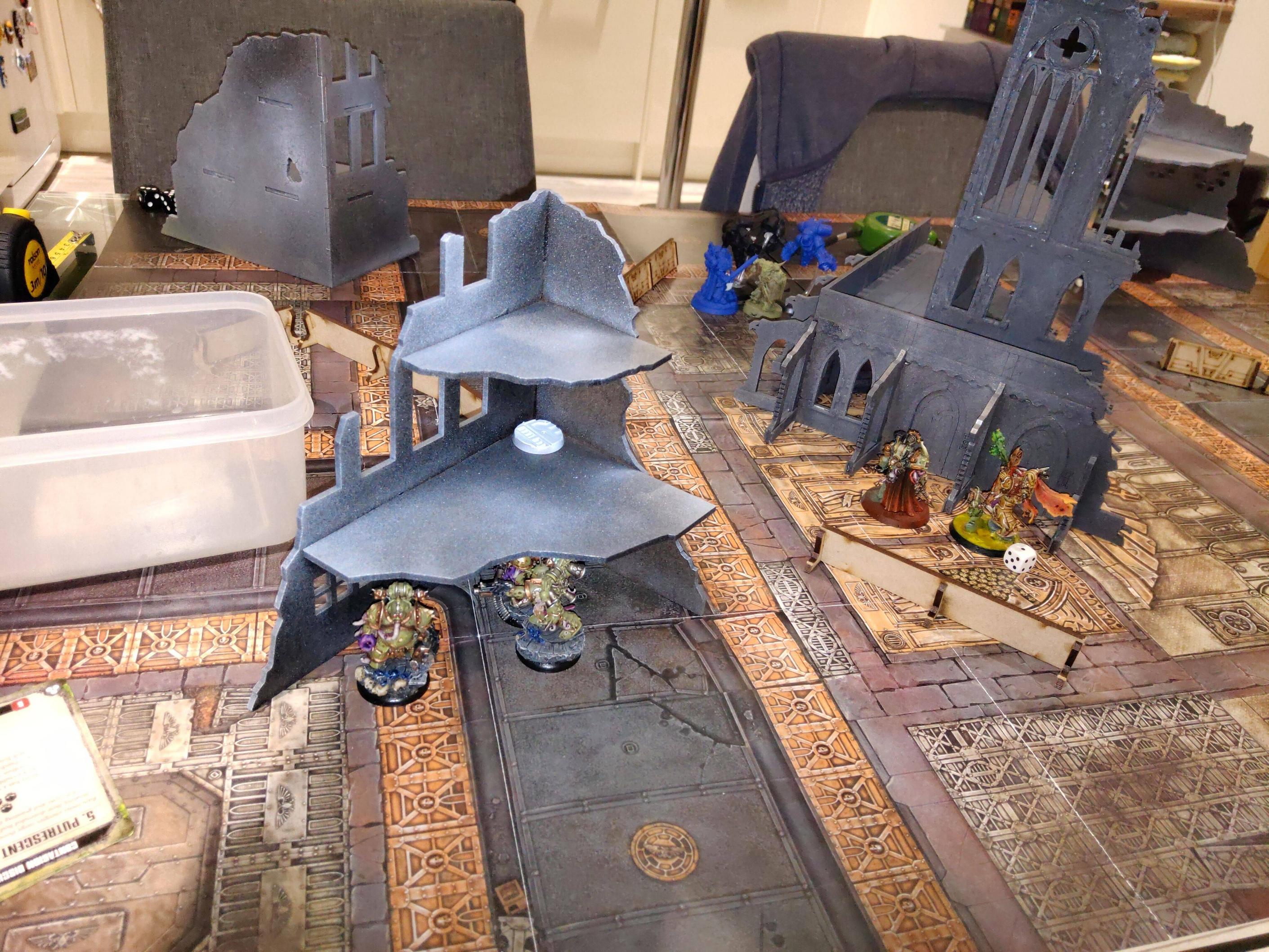 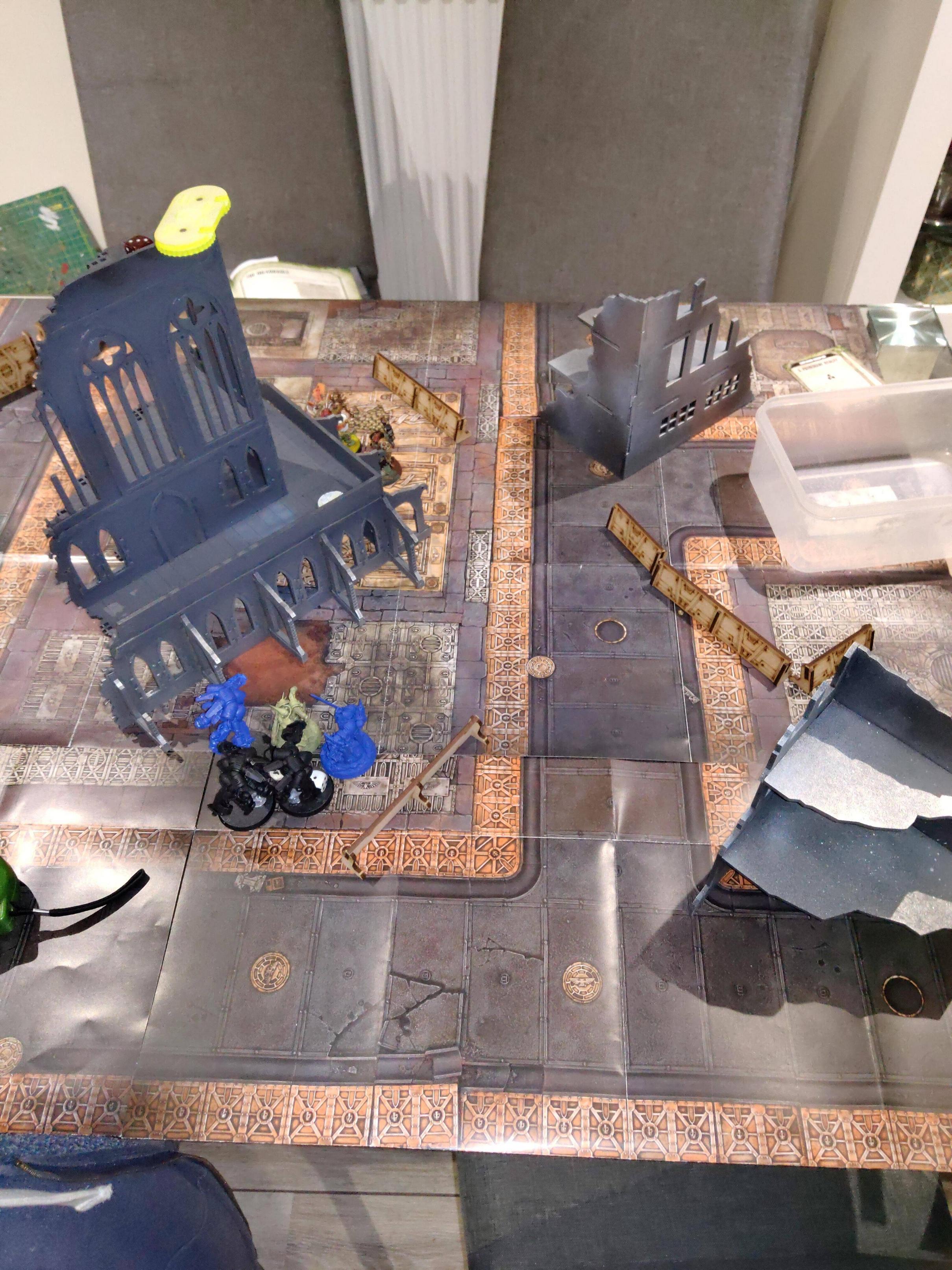 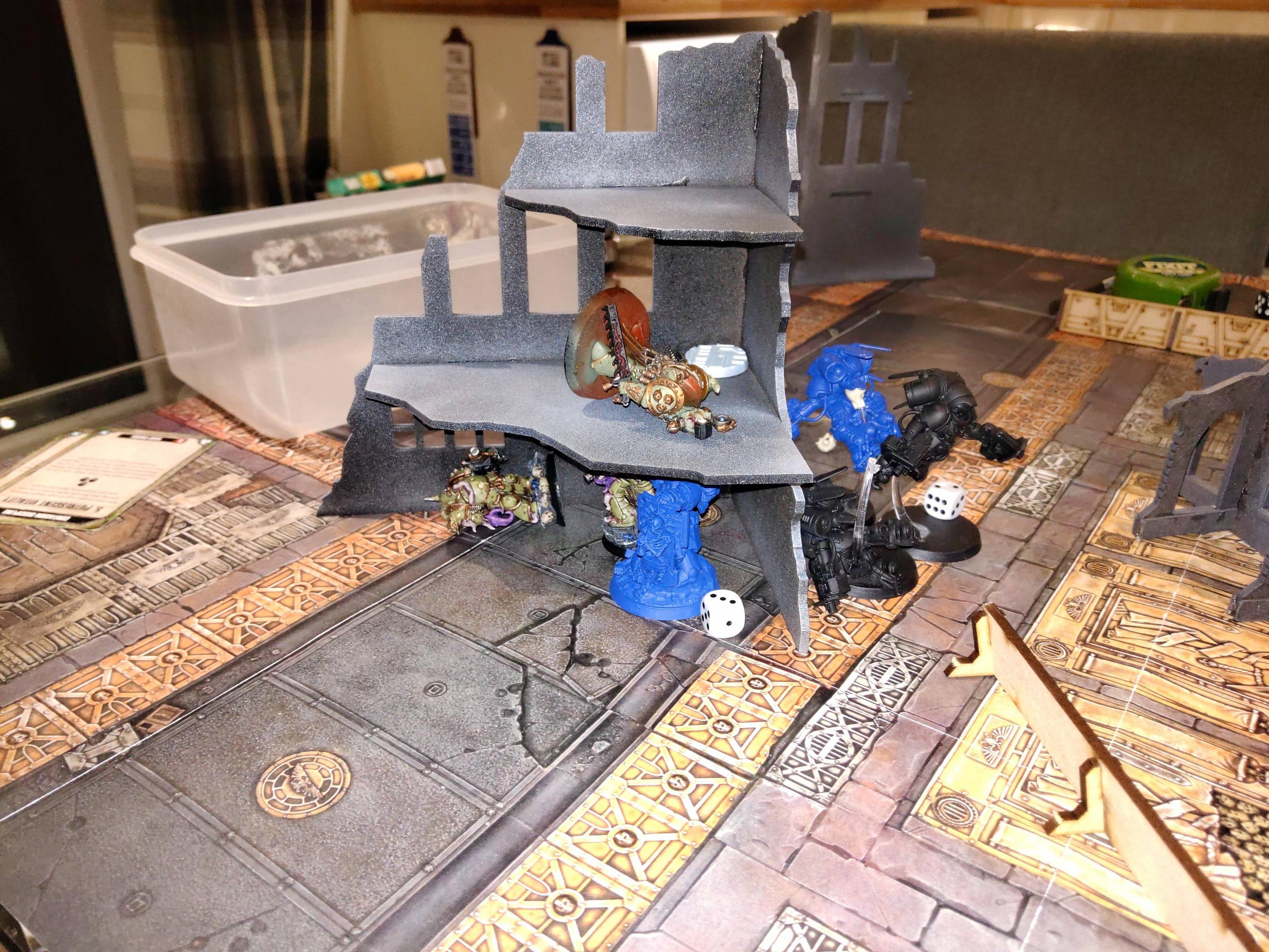 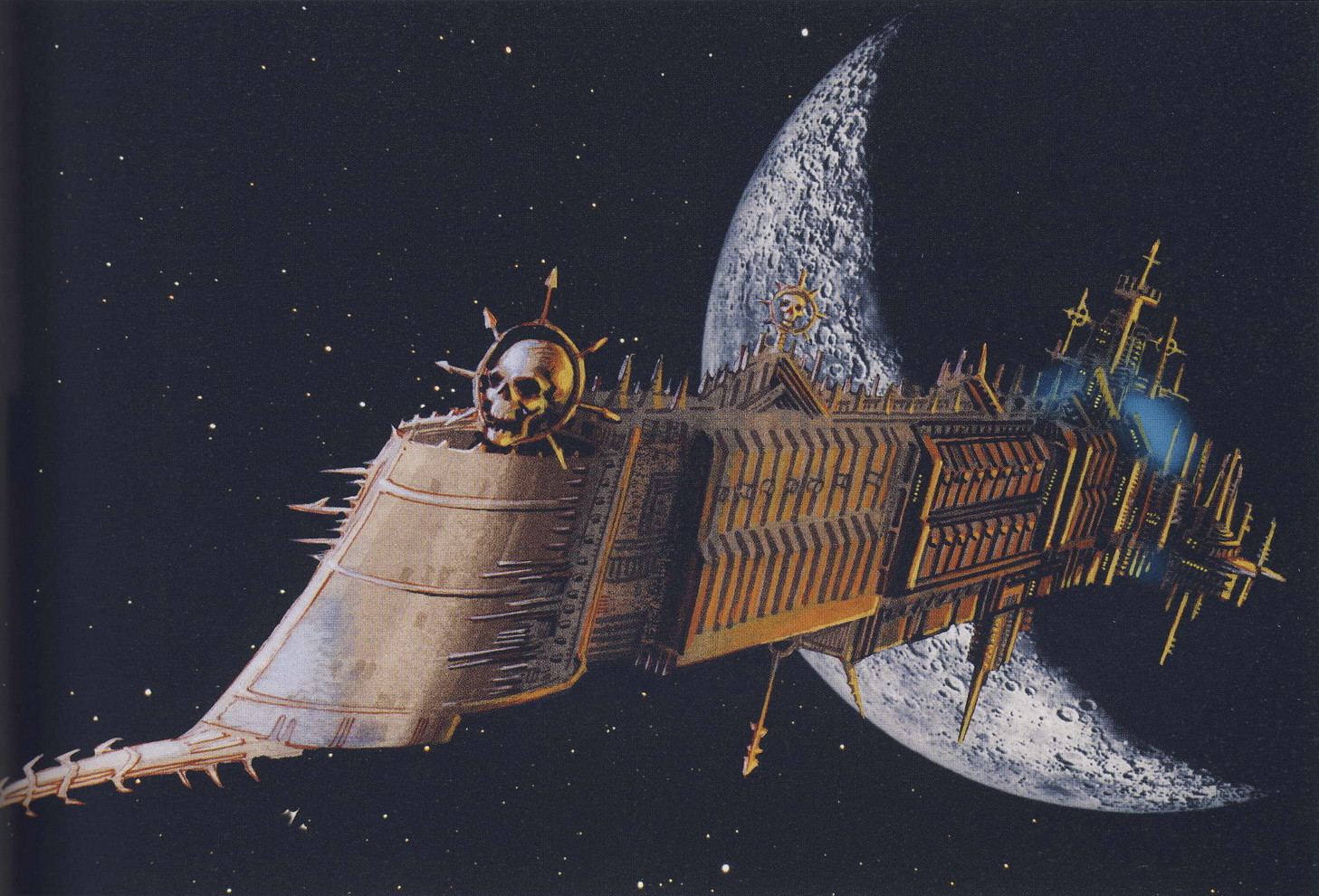 Back aboard the XIV Legion Frigate 'Noctem'; deep in the heart of the strategium, Phleggan Foultouch curses a litany to his foul god. Although victory was taken, it was by sheer luck granted by Nurgle himself. The pathogen brotherhood took a heavy toll from the false emperor's finest. Rask the chosen lies weakly on a gurney held by many menials.. pointing to the precious cargo obtained from the supply drop the death guard bled for. Phleggan unveils a cage holding a withered blind man, the boon is a great one, an astropath. Downtrodden, Phleggan knows he has underestimated the cost and commitment to see his plans, for the god of pestilence, come to fruit. But it is not over, and Phleggan has favours to call in.
As the diseases tech adepts hook the astropath into the ship, Phelggan begins to use the astropaths life force to force a message through the warp... He begins "Brother, It is time to repay your debt... a force of the sons of Guilliman need your attention. I am sending coordinates." The astropath eye sockets burn out at the cost of sending such a message... 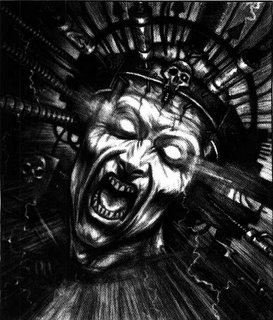 Phleggan knows it will be worth the price for the strength of arms inbound. 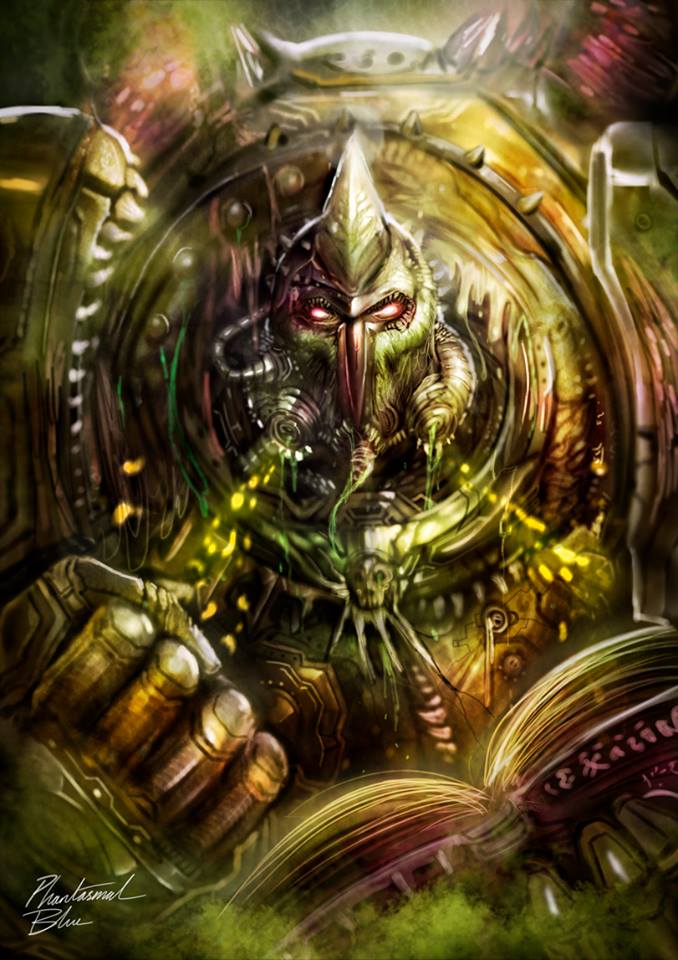 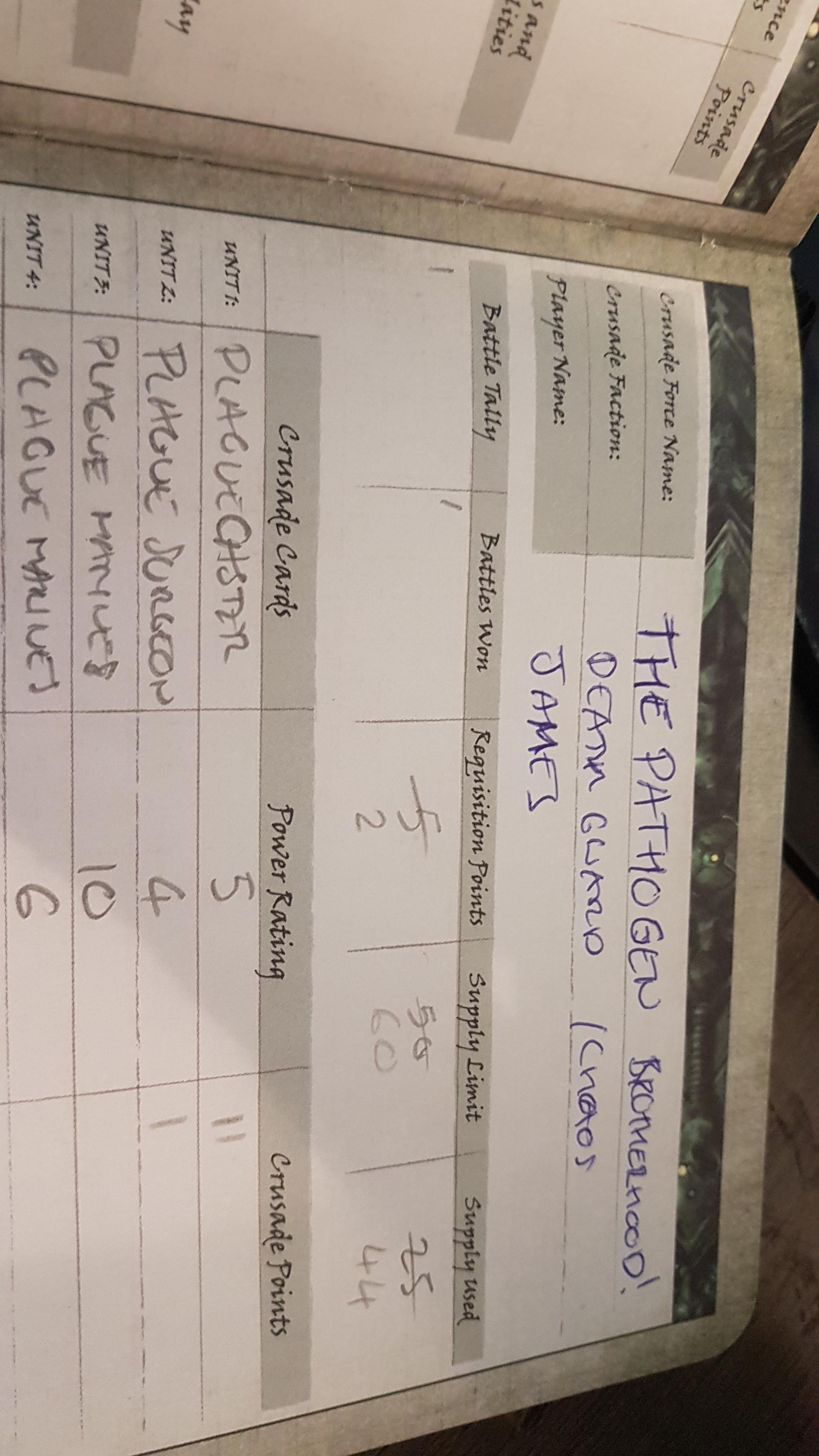 After last week i had used 2 of my original 5 rp. Gaining 2 rp from the battle. So back to 5rp.
I have used 2 rp to increase my supply limit to 60pl.
I have used 1rp to power up a new unit. New units added to crusade army not shown in the screenshot. But overall crusade supply is now 44pl.
Adam check what rp you have. 5 starting. Whatever you had left last time plus 1 for taking part in the battle. Worth using atleast 1 if you have 5 as is because you can only have 5 max.
Also worth noting you cant add on stuff to existing units whenever you want. You can only do it when they go up an experience level or when being added to your crusade force. I think.