02 Jul 20, 02:05
So I was going to leave it till after blocking stuff in but I've hit the orange with a shade mix of fuegan orange with abit of agrax earthshade. I think I'll do one more round with the same and I think it'll look effective and then probably do a gentle highlight in the original orange. Fire Dragon orange I think it is.
I've also done two thin screaming skull layers onto the bones. And I've two layers of averland sunset onto all the pox and pustules

well most anyway. And I've still only used a layer brush here rather than switching out to my super fine brush... so I'm keeping my accuracy game high!
Really happy with how they are starting to come together. It's going to be quite exciting to put these guys next to the ones I did about a year ago... which were some of the first things I did when I got back into the hobby!
Said before but no idea how people speed paint unless you knowingly make mistakes but don't care or miss alot of detail... but I can't seem to not want to do atleast a pretty good job. 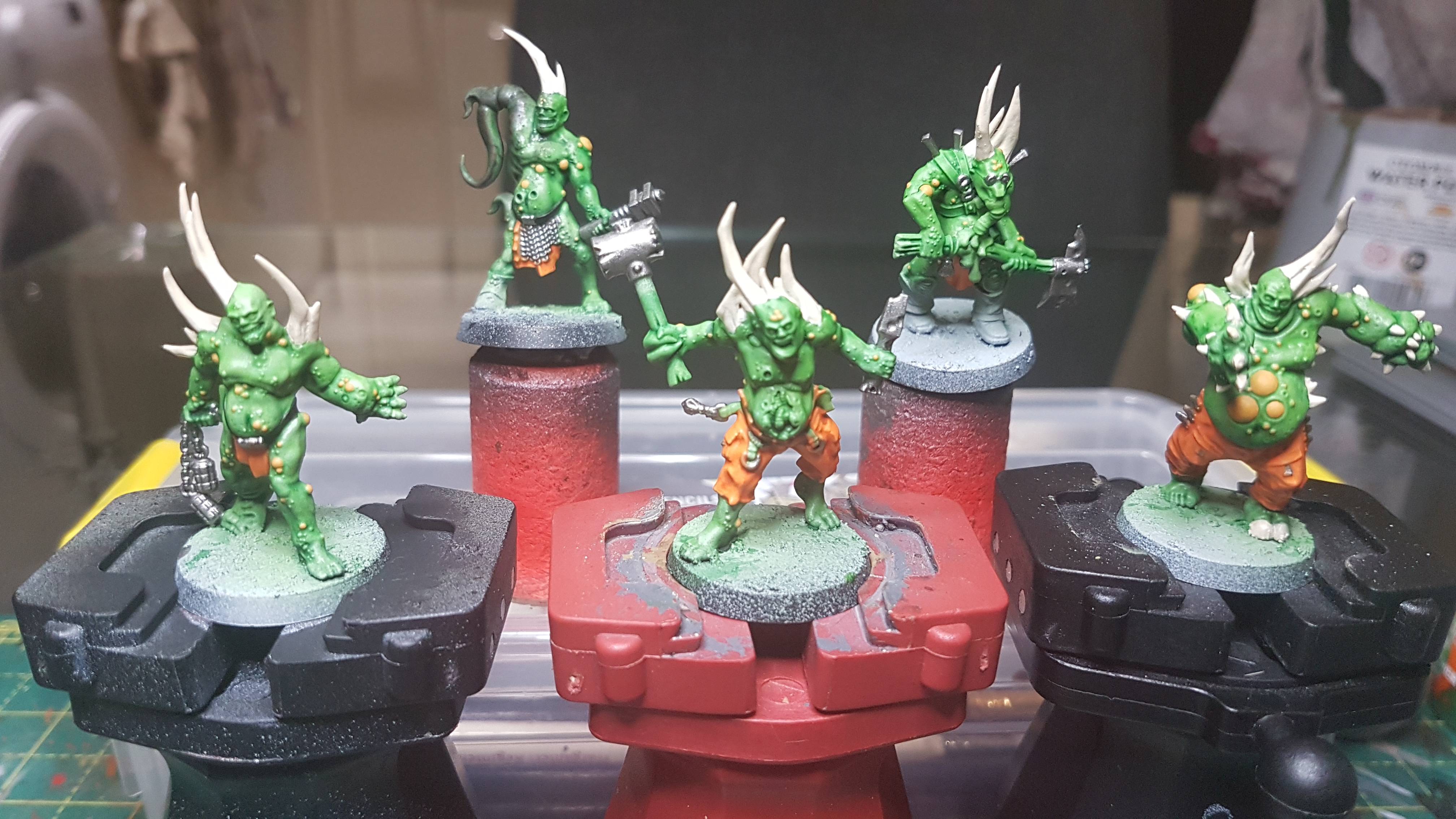 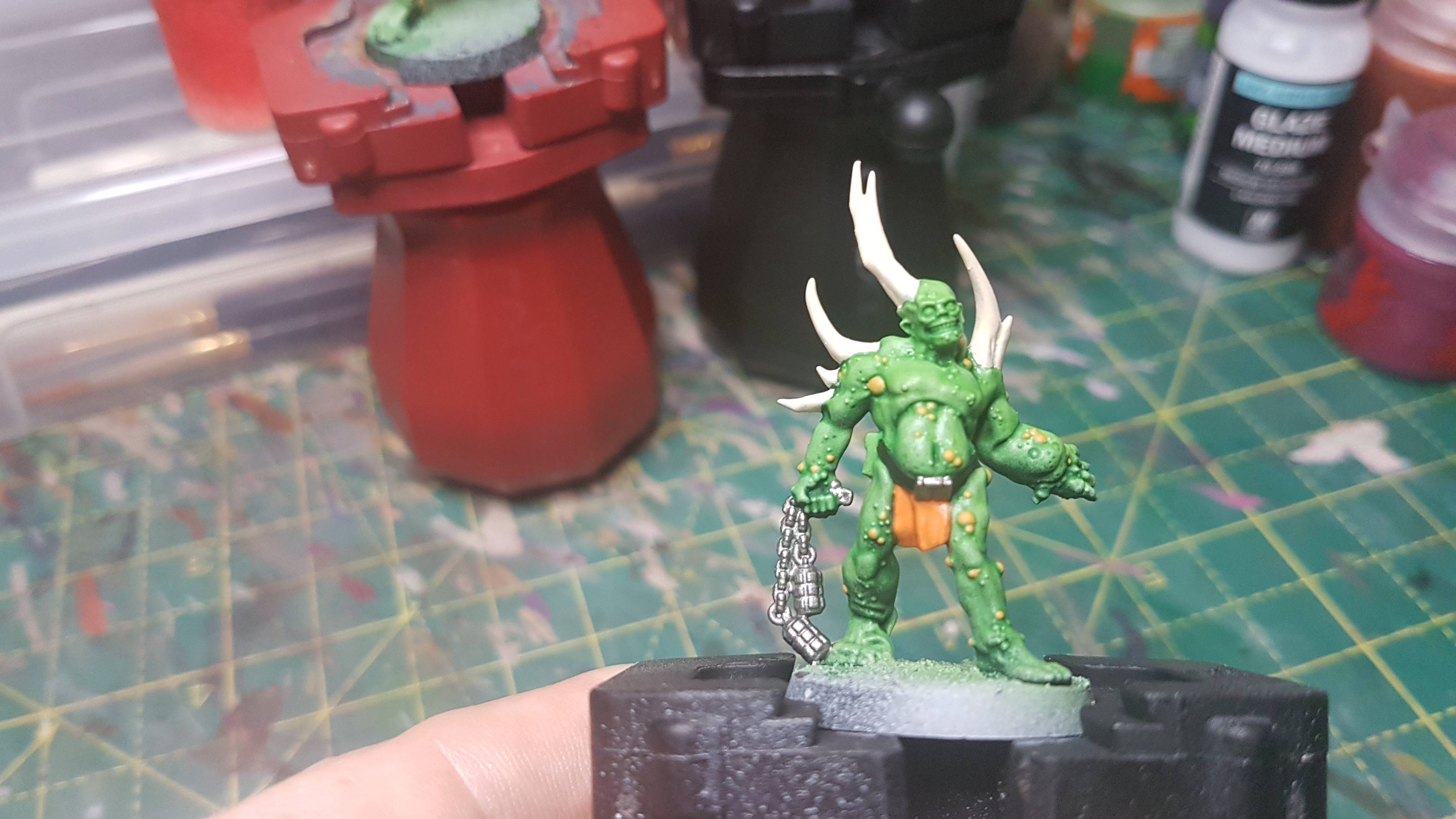 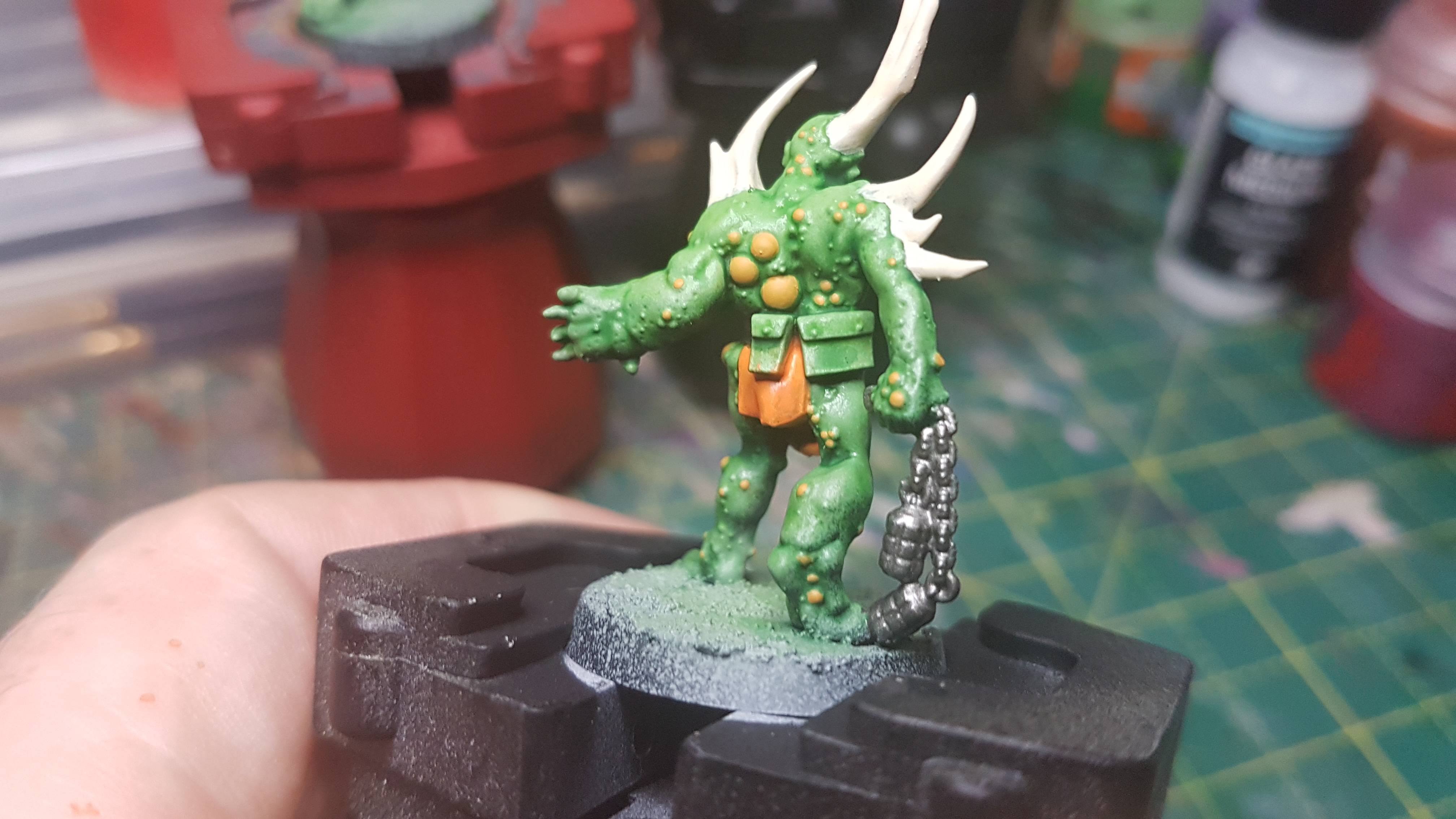 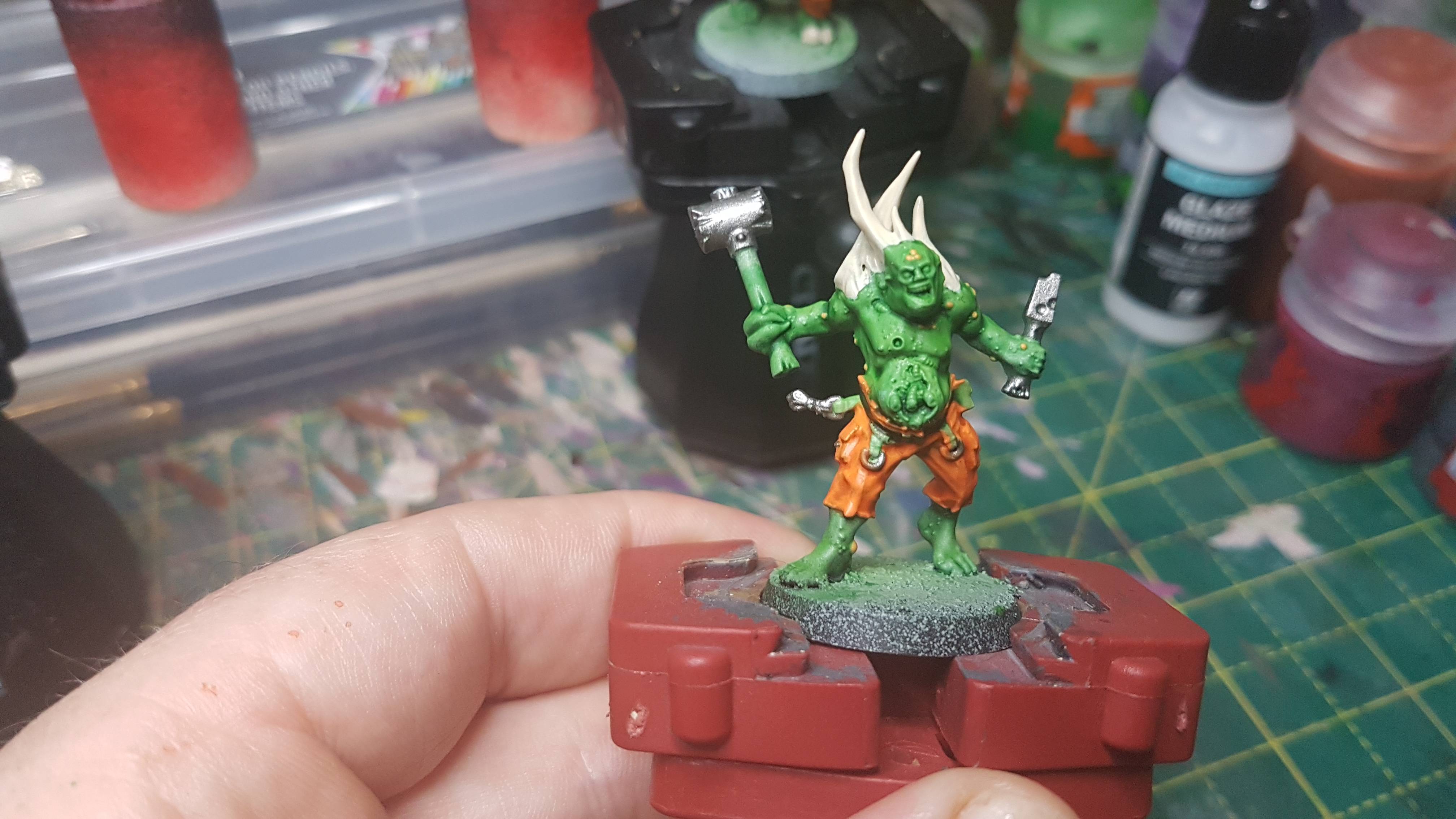 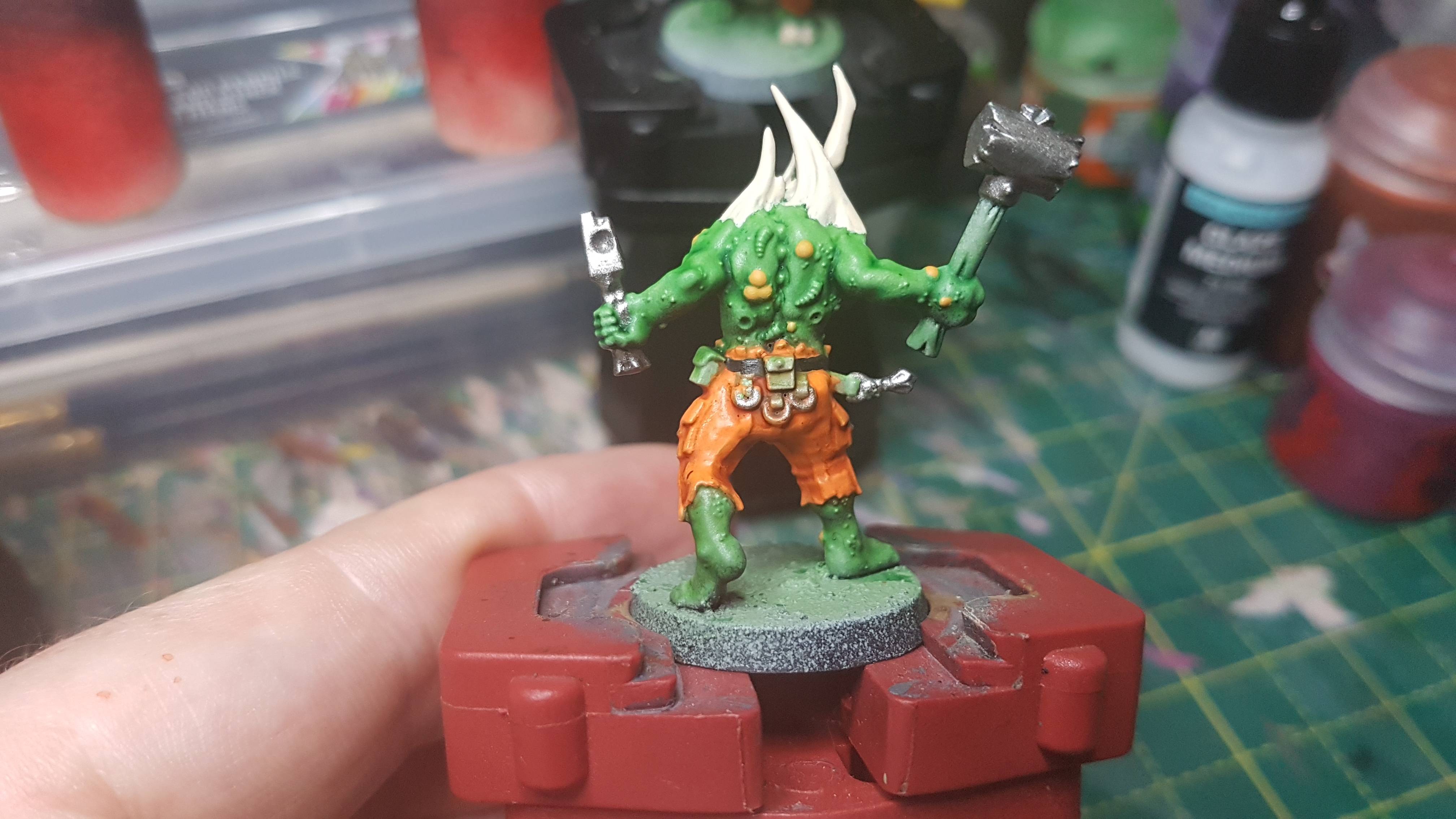 Still need to block in pouches and leather and footwear and woody stuff. Then I can get washes into them and then it'll all be detail work. Looking forward to have a pop at doing the eyes on these guys better than I've managed before!
Any suggestions for the colour of the maggots? Considering I've already used the maggoty colours of yellow or green elsewhere on the model... I'm thinking either red pink or purple... i think pink may look best and I have some good paint tones for pinks so possibly that. 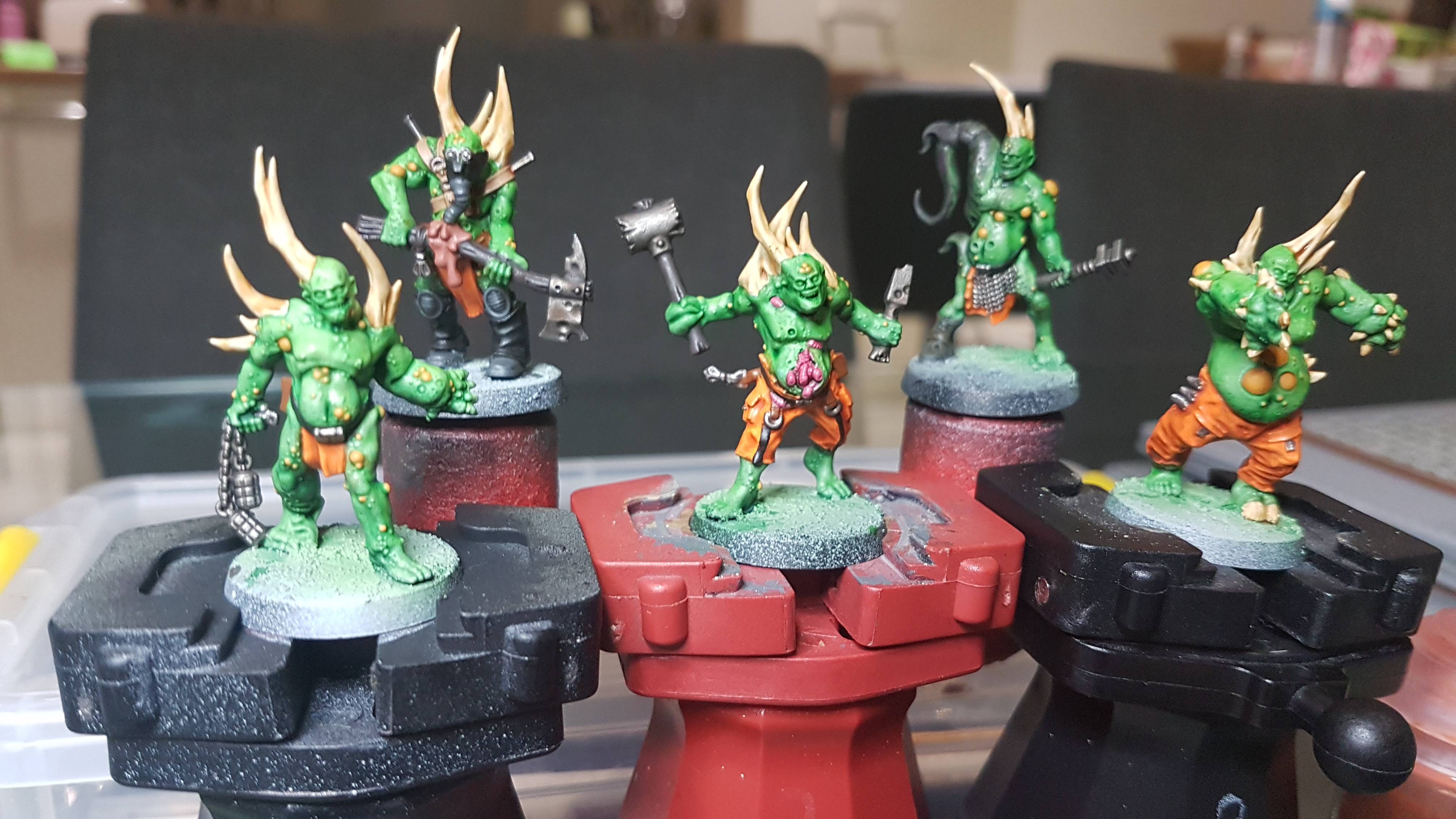 All colours blocked in and most now with an initial wash or two. Very much enjoying painting these guys! Alot less stress and pressure than on the crawler!!
Not really sure what I'm going to with the one with the tentacle. I may try a light dry brush with a grey and then hit it with red or purple wash.

If nothing else they must be a lot more forgiving!
There's nothing stopping you hitting it with Wraithbone as a new base layer, maybe? Would mean you could use red/purple/pink contrast or washes.
Paying full price for your models, paints and tools? Don't!
Use our banners after the first post or at the bottom of the page for up to 25% off RRP!
Then bag yourself double reward points at checkout with coupon code PAU6006 - simple! =]

pawl wrote: ↑03 Jul 20, 12:32 There's nothing stopping you hitting it with Wraithbone as a new base layer, maybe? Would mean you could use red/purple/pink contrast or washes.

I think the problem with them is that the tentacle doesn't have a join as such with the body.. it blends into it so it's hard because however you do it you'll need it to blend into the skin rather than just starting and ending! But I'm not overly bothered..don't want to be stuck painting these guys for much longer.

03 Jul 20, 18:51
Ah! Blending (wet, dry, glaze, whatever)has never been my strong point unfortunately. If anything glazing seems like it would be the easiest to do, but I'm certainly no expert!
Paying full price for your models, paints and tools? Don't!
Use our banners after the first post or at the bottom of the page for up to 25% off RRP!
Then bag yourself double reward points at checkout with coupon code PAU6006 - simple! =]

03 Jul 20, 18:56
Haha I know the feeling. I've managed it in some scenarios but I really don't think it's worth the time and effort since these guys are the lowest of the low haha. It's something I should have tried to achieve with the airbrush better but wasn't thinking properly

There's always next time. And I considering getting some more. I have about 21 of these fellas. But may be useful to have around 30 to 40 for matched play !

Maybe wait until Indomitus has dropped - even with Element's discount it'll be about a ton!

pawl wrote:Mask and re airbrush? Even cannon fodder deserves love

Haha stop trying to slow me down

Nah I think I've solved it. To be honest I'm quite happy to have the tentacles to be quite understated here to keep attention on the super bright green bods lol. I did the grey drybrush from dark to slightly lighter and then over the top with drucchi violet.
Quite happy with how they are looking now. All washes done. Done majority of pin or spot washes to give specific depth. Mostly done the bones. Will probs do a spot wash of sepia in a few places.
Started doing a few highlights. 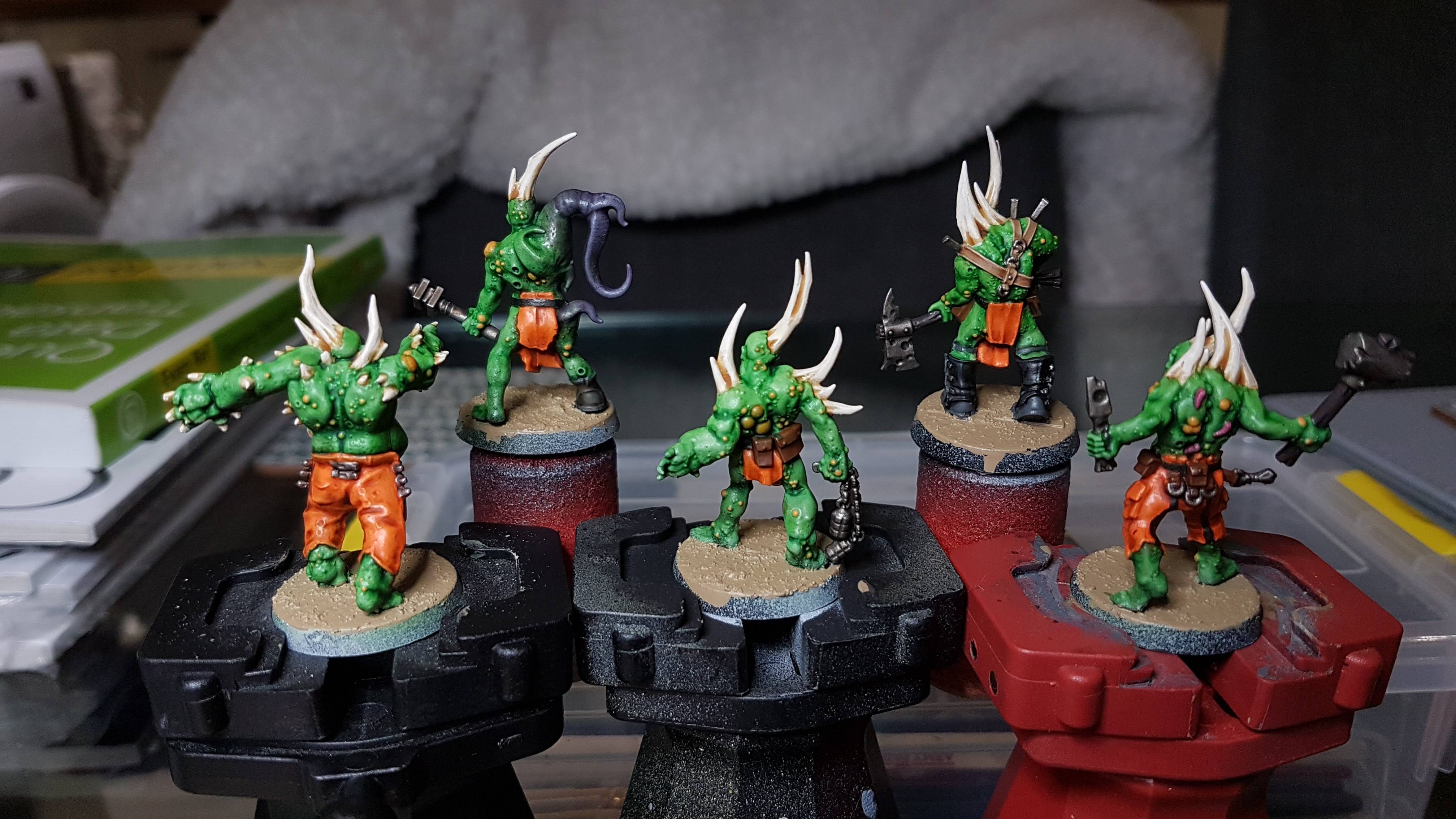 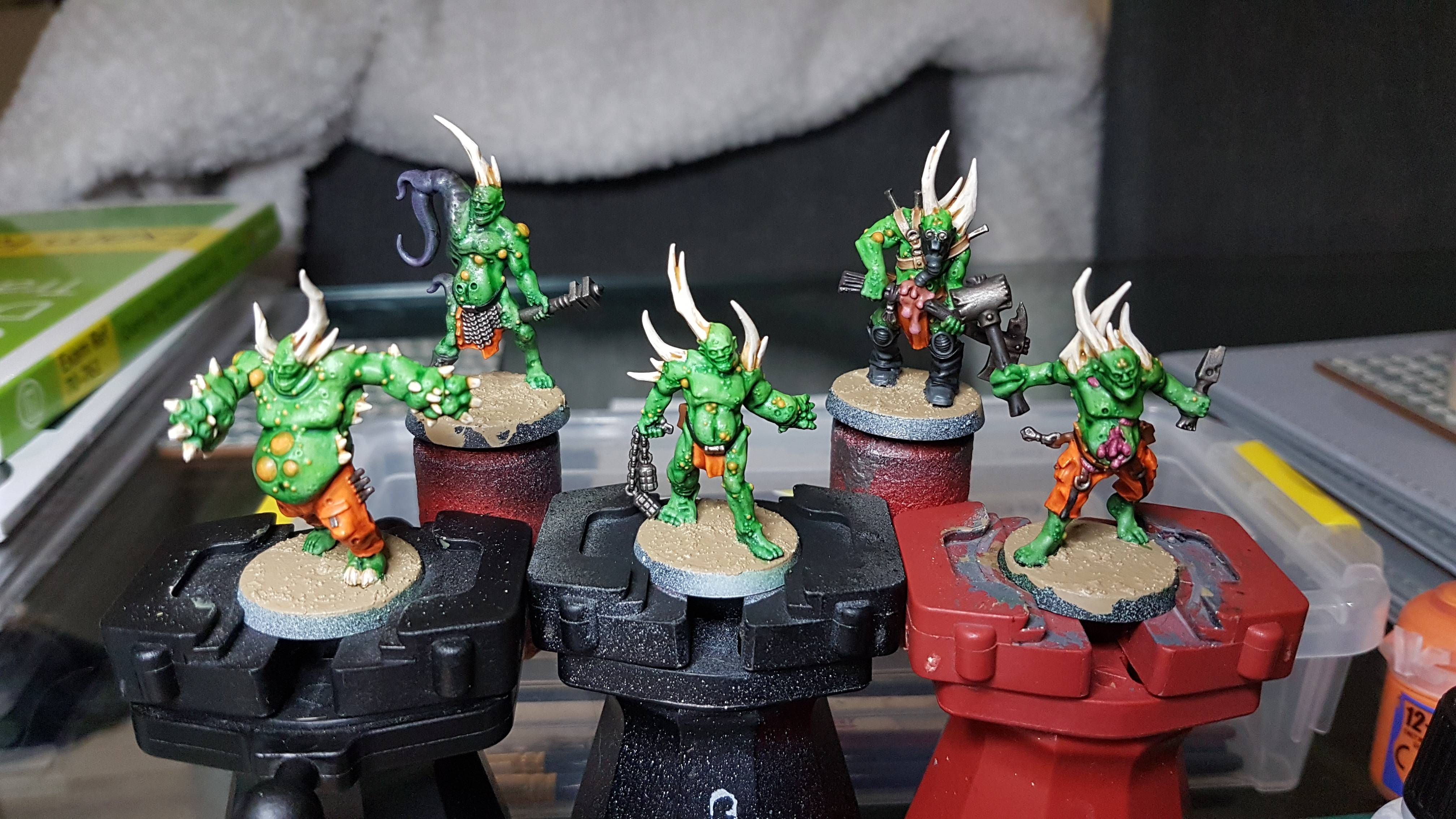 Quite happy with the edge highlight on the top right guys strappy things. Still doing all this with the small layer brush. Haven't resorted to any super detail brushes.